As artists, it is always a significant challenge to objectively view our own work. We have emotional and psychological ties to both the work itself, and the experience of creating it. When I look at one of my photographs, I do not see what you see. I see the moment on the street where I made the photograph and I feel into that experience. Simply put, I do not see objectively - my viewing is subjective. Therefore, what I consider to be my best street photograph will most likely not be what you consider to be my best. I find this concept very intriguing, because knowing what I believe to be my best work and understanding the reasons why I feel this way can be a very revealing experience for my viewers - It is an unmasking of the artist.

In this post I asked twelve street photographers to show me their very best photograph and, in fifty words or less, tell me why they feel it is their best work. I've invited them to unmask. The results are both intriguing and surprising. In most cases, these colleagues are either friends or, at the very least, photographers with whose work I am familiar. Time and again, I would not have chosen these images from their bodies of work - and, it is interesting to read into why they made the choices they did.

We begin with Joel Meyerowitz, a legend when it comes to street photography. Although this post is not about famous photographers - it's about simply photographers at work today - I asked Joel to lead us off as he has been an inspiration to many of us that follow here as well as countless other photographers.

I'm very pleased with how this feature turned out. We have a varied mix of photographers from around the world. Although, no women, unfortunately, even though several were invited. We have street images that are people heavy and others that do not contain people at all. Finally, there is both color and black and white images. As you read through these comments, and view the photographs, I'm confident you will come away with a deeper understanding of what drives (even compels) street photographers to do what they do. Finally, I also invite you to click on the photographers name above their images and visit more of their work. You'll be thankful you did. Let's begin. 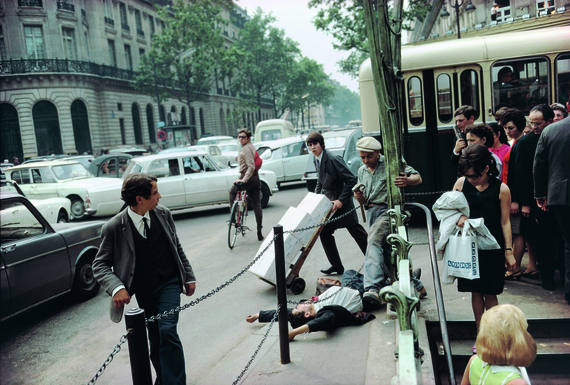 "BEST is a superlative, yet for any artist best also signifies a work from different periods of development and growing consciousness. Here, in Paris, 1967, the photograph provoked me to consider: which is the greater drama of life in the city: the fictitious clash between two figures that is implied, or the indifference of the one to the other that is actual? A photograph allows such contradictions to exist in everyday life; more than that, it encourages them. Photography is about being exquisitely present." -JM 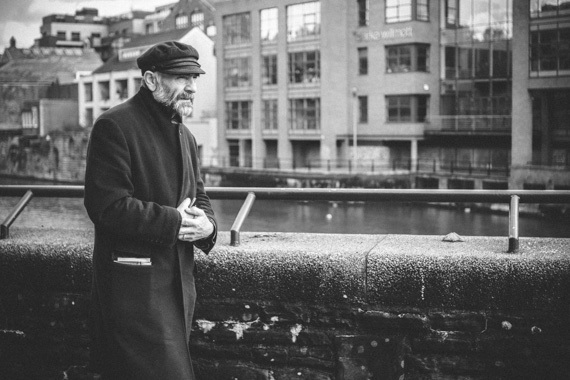 "This photograph symbolizes the turning point in my journey from keen amateur to serious Street Photographer. Getting such a strong photo proved to my inner fear that being brave and approaching your subject with your eyes open and your camera ready, you will capture your greatest photographs." -NB 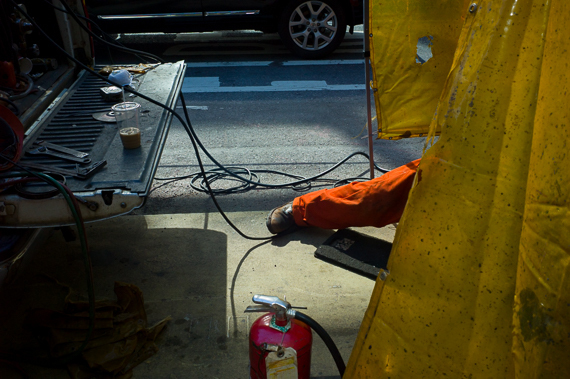 "I primarily shoot in black and white; so choosing what I would consider my "best" color photo was more challenging than I thought it would be. In color, I tend to gravitate more towards shots that are "graphic" in nature, and subtle in story." -MH 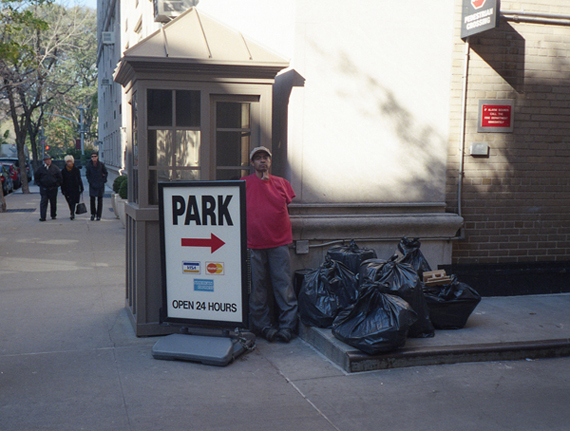 "This is a tough choice, I'm not sure if this is my best as I'm not a very objective viewer as of yet. I do enjoy this photograph simply for the tone and dynamic. I was standing in the corner eating lunch when I saw the subject (the man with the red shirt) walk over to the shade from laboring and relax for a bit. That juxtaposed with the assumed well-off group of people approaching from the distance seemed interesting so I ran over and made the photograph. It was taken on 68th street between Madison and 5th avenue in Manhattan. A very simple photograph but I think it captures what I consider Midtown Manhattan well." -DS 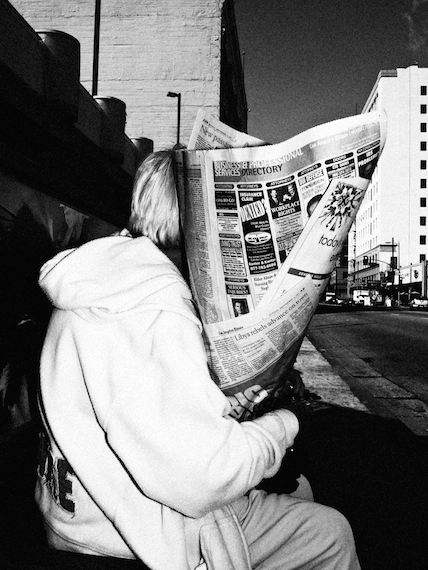 "Despite this image being taken ​​in October of 2011, in Los Angeles, California, I have published it only recently. I avoid taking didascalic pictures and my photography prefers to leave the question unsolved, open to suppositions, giving a free interpretation to the viewer. I think this picture represents what a street photograph is for me: there is the urban environment, there is surrealism, an association between the folds of the sweatshirt and the newspaper etc." -AC 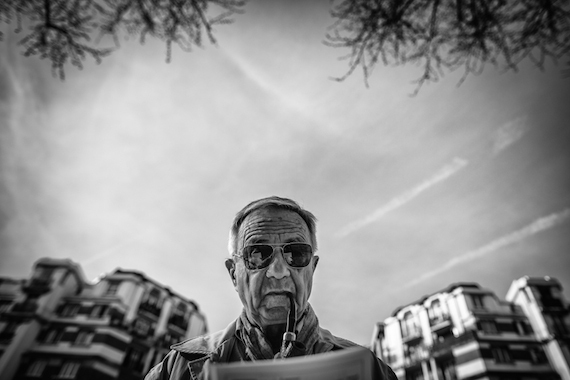 "In my street castings I look mugshots a little out of time. I walk and I scan with the eye. I'm looking for "people" - ordinary people who do not know they are ordinary, or at the contrary, who hope that their singularities will get them out of the plebs. Not always, but borderline ridiculous. At the border of good taste and kitsch. When was this photo taken? It could have been thirty years ago, or thirty days ago." -CD 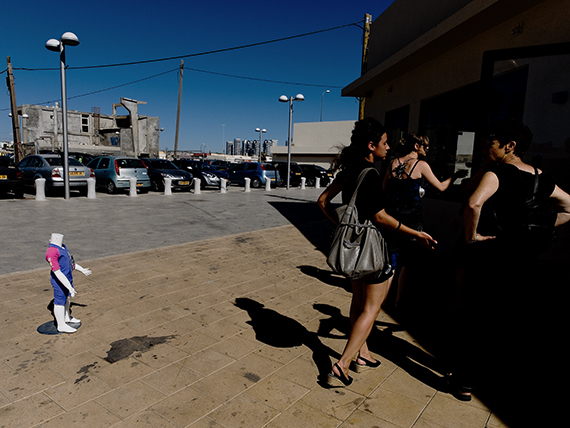 "It is hard for me to choose my "best" image, it's like asking a parent which child they love the most... So I picked up a photo I like among so many others. I picked this one because: a. it's in color and, b. it holds many aspects of photography that I like, the parallelism of the hand gesture of the mannequin and the girl on the left, the surrealism of the whole scene, the dark and long shadows of photographing at the later hours of the day that brings beautiful light. I like photographs that enable the viewer to imagine the story behind the scene. It's the kind of photo that can be taken lightly, or one where you can find a deeper, more important message." -SK 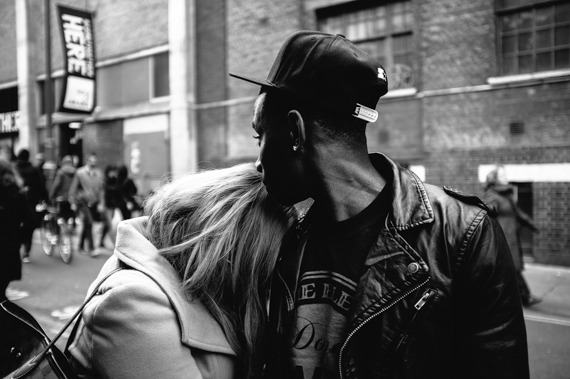 "Street photography is full of moments. Some are decisive, many are stolen. This intimate moment continues to invoke a heartfelt smile and joy that is unequalled." -SC 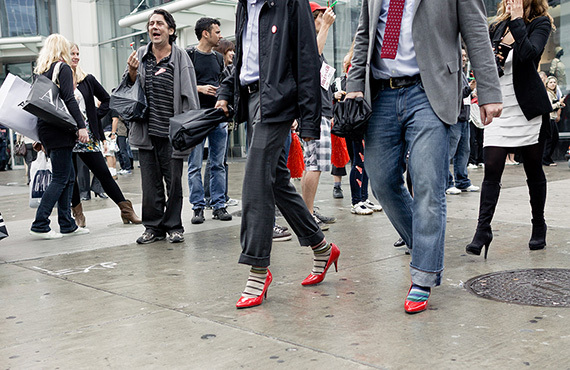 "When I look at other street photographers' work, I rarely read the captions. For me, the story of the photograph is told by the elements within the image. Photographs, in my opinion, do not need an explanation beyond place and time." -TR 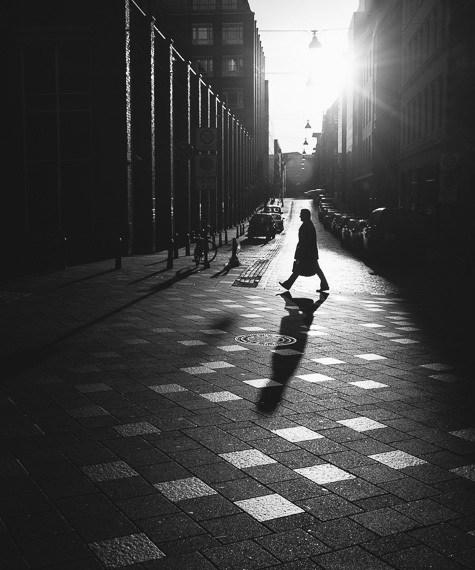 "It was the last work day of the year when I captured this image. The image perfectly represents the emotion that I had at that moment. The man walking by is like the time that passes while we move on. The sun peaking out represents the new year ahead." -ML 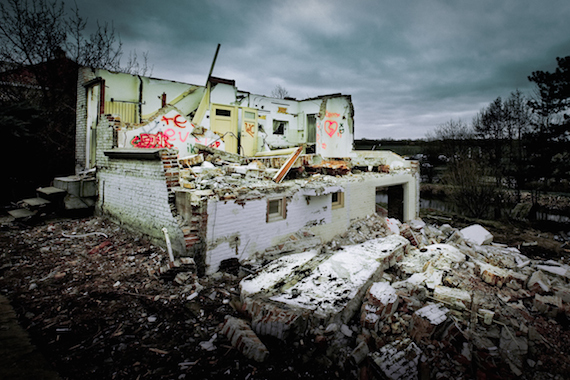 "I'm looking for the personality of the space (of the buildings in the space or the people using it) when I photograph in the streets. The melancholy of decay, echoing stories from the past that are breathing their last breath or strange man-made patterns that seem to connect and communicate in ways we do not understand. With my roots in fashion and fine arts photography, I guess I am looking to capture the personality of something lifeless. Without the people. The ruin with the graffiti is a person to me, with a story to tell. She no longer exists so I am glad we met when we did so I could capture her before she faded away completely." -M 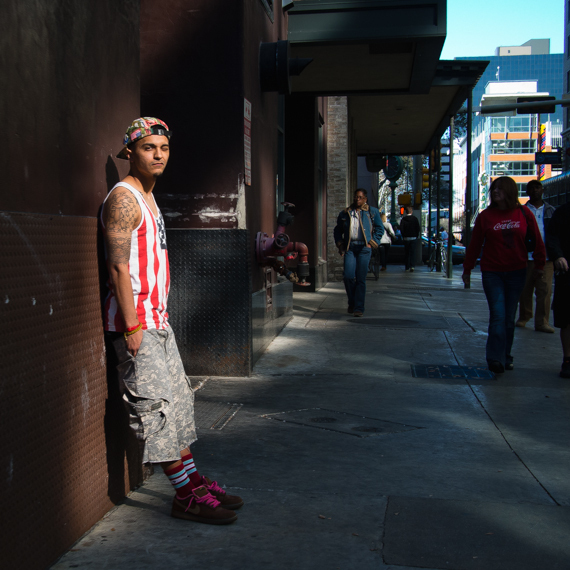 "I consider this photo my best photo because of its spontaneity (it was taken as I was walking toward the subject), as well as the subject matter. In my opinion, the subject and the background elements, paint a picture of what others perceive to be the American life." - JA 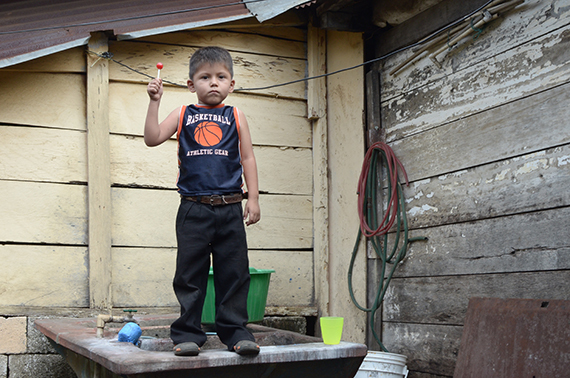 "This photograph has always touched my heart ever since I took it. Maybe it's the composition, the neutral colors, the expression on the boy's face, or maybe the fact that he's holding his lollypop in the air. It's all the little things, that while simple, make this image powerful." - MA 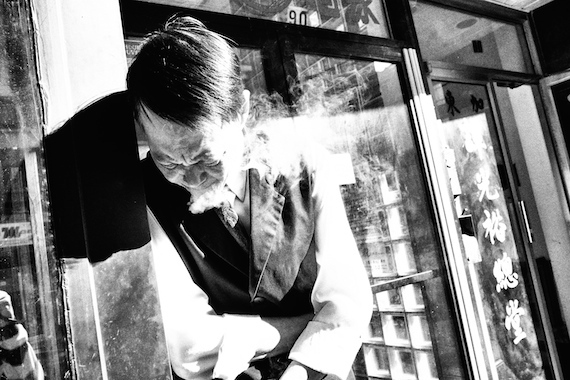 "I like this photograph. Is it my "best"? I'm not too sure. That's a very hard thing to determine. When I started this feature, I thought it would be easy for photographers to talk about their best image. I was wrong. When trying to select my own image, I quickly became aware of how hard this task truly is. I like the moment in this image, the light (dynamic range) and the cigarette smoke. It's a dramatic image and, at the same time, a quiet moment when someone has stepped outside for a smoke - a break. Photographing in this light was a challenge, especially as I only use compact cameras, and, yet, I kind of nailed it. I think this is a strong image in some ways, but how could I ever know if it is my best? I think Joel is right, BEST is indeed a superlative." -MS

Want to have your work featured in an upcoming post? Tweet your best photographs to @28mmphotos. I'm always on the lookout for intriguing work.