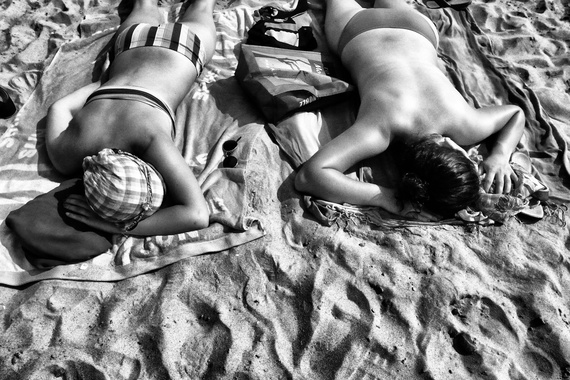 Some places are just ripe for photography. Coney Island Beach in Brooklyn, New York, is one of those places. Many famous photographers have trekked over the sand there to make their iconic photographs - Weegee, Robert Frank, and Bruce Gilden, to name but three. So it was no surprise to me that I too would find this place so alluring. Little did I know, however, that I would become almost obsessed with it. 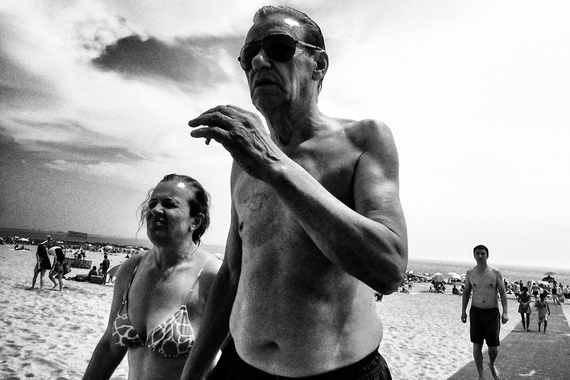 I have been photographing almost non-stop at Coney Island over the past three summers. Just when I think I know every inch, every person, every grain of sand, something new pops up - another great photograph. This is one of the greatest qualities of Coney Island - it is at once familiar and never the same. 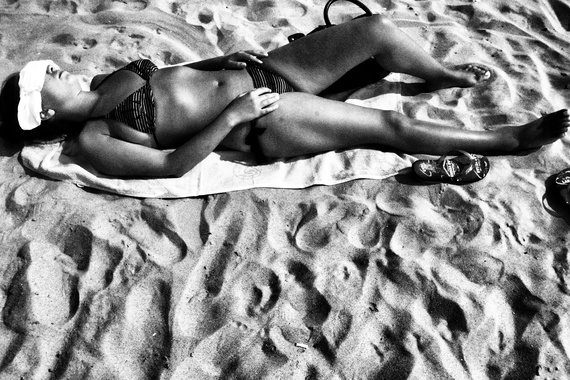 Photographers from around the world will often write to me because they are planning a trip to New York City - Where should I photograph? While there are many places to explore in and around New York City as a photographer, I never neglect to implore them to take the train out to Coney Island. If one doesn't do so they are, without a doubt, missing some aspect of the New York City photographic experience. 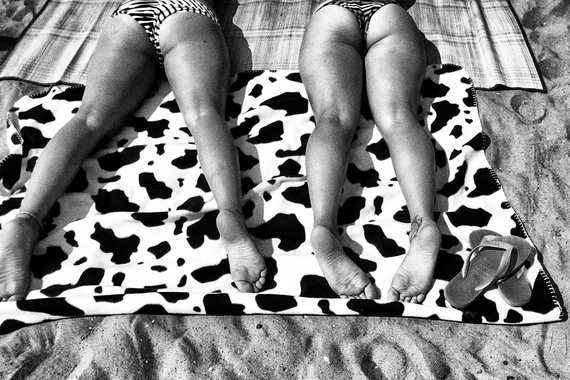 I know not everyone desires to make photographs like mine. In fact, most people don't. The images are crude, abrupt, and not for the faint of heart in terms of making them - people sometimes take offense to having a flash fire three inches from their face - or rear end, as the case may be. But this doesn't mean there isn't something for everyone to photograph at Coney Island. The first summer I spent there I took quite "normal" photographs. Although unpublished, mostly because they are not typical of my "style", they are still some of my all time favorite photographs. 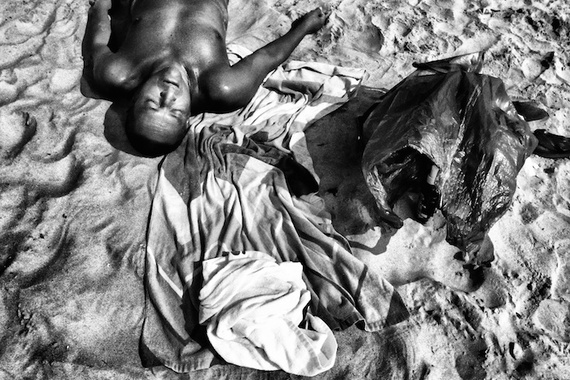 So where to go? What to do? And, how to do it? Coney Island is quite big, actually. Although the main (or busiest) part of the boardwalk is only a couple city blocks. Indeed there are a lot of great photos to be had in this dense part of the iconic beach. Regardless, one should not limit oneself to this "comfort zone". Explore! Wander up and down the beach to the furthest ends - see what others are missing - get that "unique" photograph. 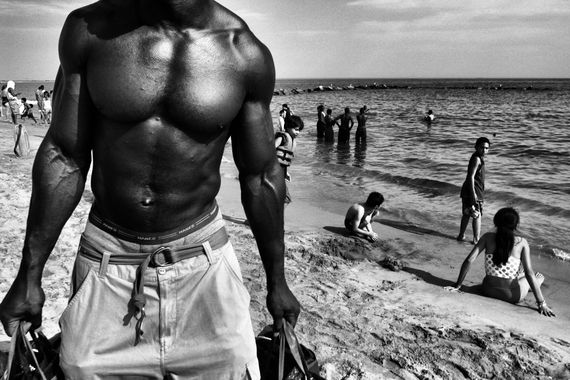 One of the strangest things that can happen to a photographer (I imagine) is to see someone else's photograph and recognize it as your own - but not your own. That is, both of you took the "same" photograph. This happens often to me in New York City because many street photographers tend to hunt the same turf and stalk the same prey. Thus, one of the most rewarding experiences one can have as a photographer is when you truly push yourself to go somewhere new, somewhere different, somewhere others may not want or think to go. 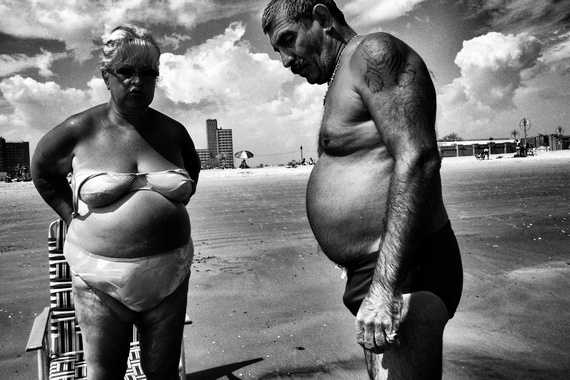 What to do and how to do it? Well, there is no right or "one" answer here. I would recommend being somewhat discreet (read: not obnoxious) but at the same time don't hide. Whatever you do, don't hide the fact that you are making photographs. This is the fastest way to get someone to call the police on you. Yes, I quite understand that photographing in public in New York is perfectly legal, but that doesn't mean that a long conversation with the public and the police is going to be much fun. Even if you will "win" in the end. So avoid this. If you are obvious and polite about what you are doing people will show resistance if they don't want to be part of your photographs. When they do, you move on. Does this mean that everyone I have photographed has been completely aware of me or has tacitly implied participation? No. But I do make a point of not hiding either. So far, so good. I can only recall two or three altercations (albeit minor) in the five or so years I've been photographing the streets in New York. 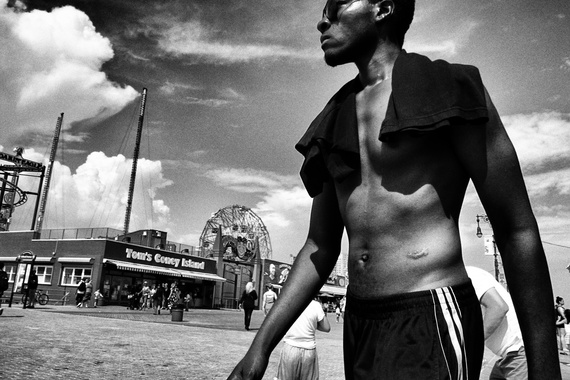 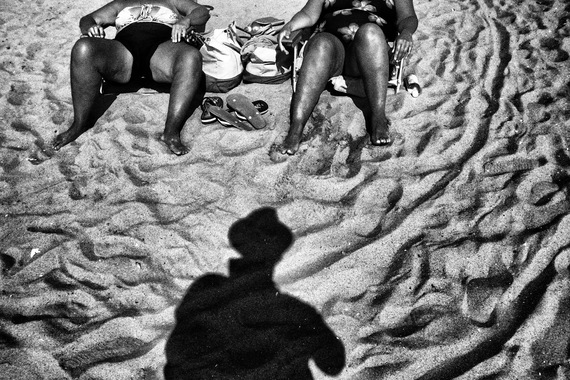 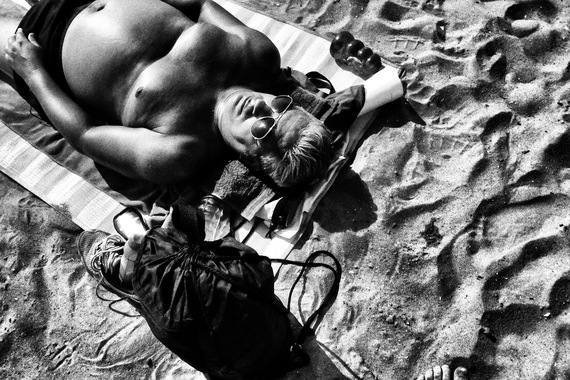 Although I am not a big fan of making "street portraits" - where people at least imply consent by cooperating with you - Coney Island can be a good place for this kind of photography. The annual Mermaid Parade (a huge draw for photographs) is a public display of people in costume almost begging to be photographed. Although these photographs will be more commonplace among the New York milieu, they will, without a doubt, make great images for the foreign holidaymaker. 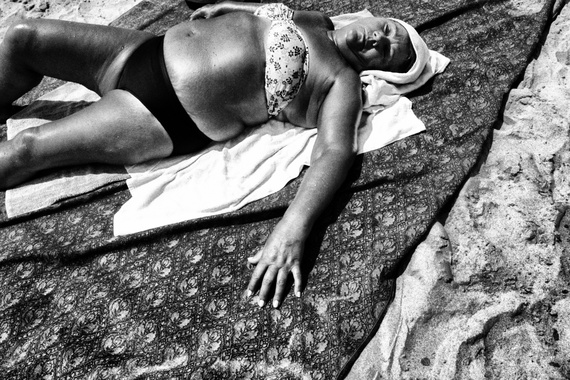 I don't usually photograph much in the theme park area of the beach, but, once again, I would be amiss if I didn't highlight this for you. There can be some great shots in there and some very willing participants for your photography. Coney Island's theme park is a little seedy. It's cleaning up a bit these days, but still has the feel of a place that is past its due date. This edgy feeling can translate very well into photography - yet another reason to venture down the ramp and into the rides area. 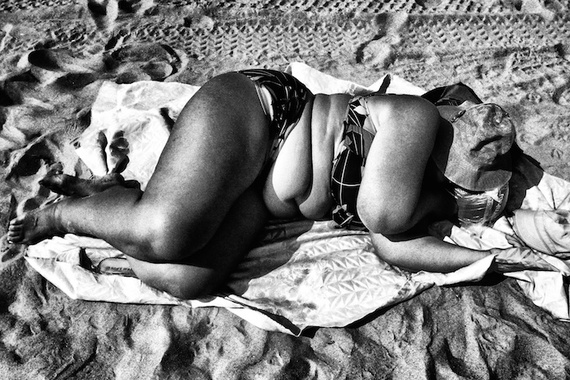 Film or digital or what? I say digital, actually. And I am a big, huge, fan of film. However, at Coney Island you are going to just want to shoot and shoot and shoot. If you don't mind blowing through a dozen rolls of film in an afternoon, then by all means go analog. If you'd rather not, than I propose taking digital equipment on this particular outing. There is just something about the place that inspires constant shooting. You will see photo after photo after photo and will not be pleased if you are limiting yourself because you have a roll of Portra in your camera. 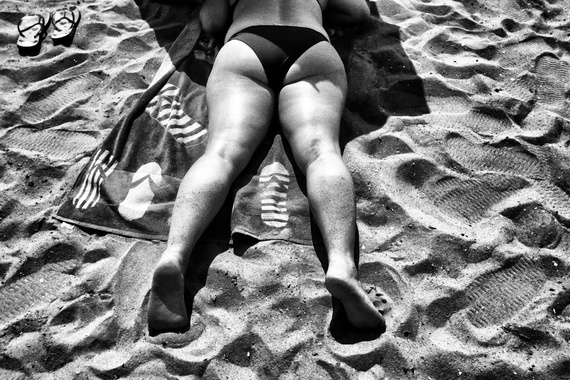 Coney Island Beach is hot. Sometimes, in the dead of summer, almost unbearably hot. It is still New York City after all. So go prepared. Take a hat and sun block and so on. Also, the heat can cause some batteries to go a bit wonky, so take extras and try to keep them out of the direct heat. Oh, and yeah, there is a lot of sand! If you have equipment that is particularly delicate in this situation (i.e. a camera with a retracting fixed lens, Ricoh GR, for example) you will want to be especially careful. Sand will get everywhere! A weatherproofed camera is really the idea equipment for the beach, regardless of the actual "weather". 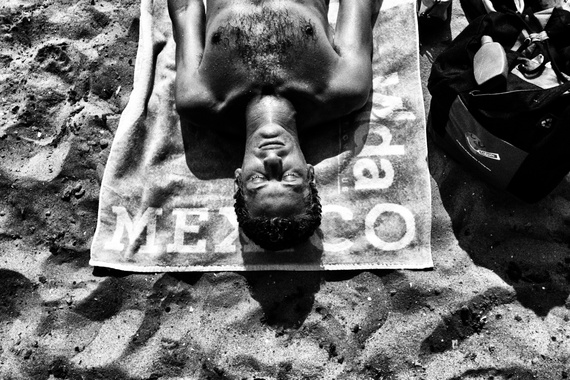 So if you are heading to New York City, don't be afraid of the long train ride out to Coney Island. You will enjoy the rich photographic opportunities. Go prepared and spend some time wandering far and wide along the boardwalk. If you don't see that great photo at first don't despair - it's just around the next corner - I promise! 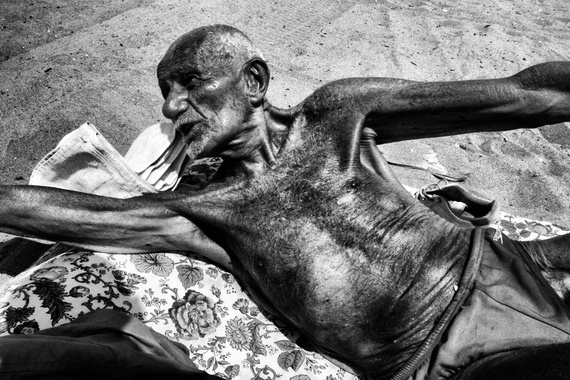 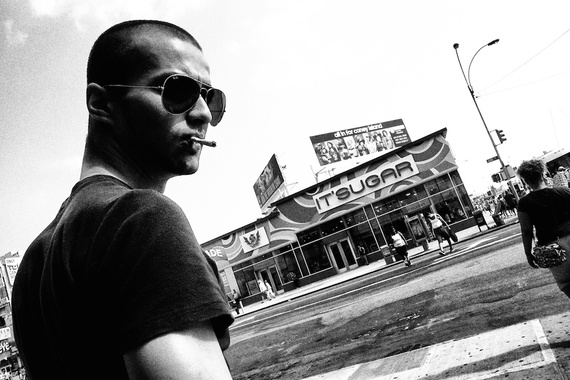 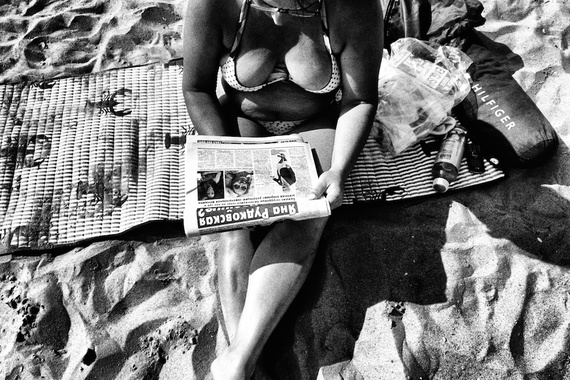 Michael Ernest Sweet is a Canadian writer and photographer and author of two full-length art monographs, "The Human Fragment" and "Michael Sweet's Coney Island". He is best known for his signature photographic style of people up close and in gritty black and white. Almost instantly recognizable, his work has appeared in magazines, exhibitions and in shops around the world. Follow him on Twitter @28mmphotos.