I used to have the utmost respect for street style photography. When I discovered its existence just days before I began my blog, I kept the nine pictures I'd collected off the Internet in a folder on my computer and looked at them every night before I went to sleep for inspiration. I hoped that the skill with which these women had crafted their outfits would rub off on me and that I would magically be able to recreate what they had worn in my own wardrobe. It has taken me over a year to realize that that isn't really the point. What someone else chooses to dress their body in is not necessarily what I should dress my body in -- if this were the case, the term personal style would carry no weight at all. As sad as it is, the latter statement is slowly gaining truth. And what is fueling this decline but street style photography itself?

Gasp in disbelief, let your jaw drop in shock, react however you will, but the camera is killing individuality. I hadn't fully been aware of it until Fashion Week this September, and it seems the same realization just dawned on everyone else, including the New York Times and Man Repeller. One would think that due to the influx of inspiration coming at us from every angle, personal style would be flourishing. It's quite the contrary: we have been so overloaded with pictures of every blogger wearing the same shoes and the "it" jacket that we feel we just need to have them. But who is to blame -- those behind the lens, or those in front of it?

Street style photography developed a solid reputation decades ago beginning with Bill Cunningham. I consider him to be the founder of the craft. Aside from Bill, there weren't many other cameramen and camerawomen competing for a picture of Anna dello Russo as she hailed down a taxicab. Scott Schuman, the Sartorialist, started his blog in 2005 and reinstated street photography as a reputable career. He has maintained the integrity of the craft, but he is one of the few. During New York Fashion Week, amateurs with DSLRs flock Lincoln Center hoping for a glimpse and a few shots of their favorite fashion icons, but most often get the wannabes in expensive clothing attempting to stand out in the crowd. I am not in any position to say who is not staying true to their personal aesthetic, but it's someone, because everyone looks the same. The young woman teetering across the Plaza in her Jeffrey Campbell Litas in a peplum dress from Zara holding an envelope clutch under her arm while checking Twitter on her iPhone 4S, despite the time she spent painstakingly making herself camera-ready and fashion blog-worthy, will not be photographed by the likes of Garance Doré. She will be snapped by people like me, those trying to feel out the scene and look like we know what we're doing.

For my first two seasons at Fashion Week, I was that overzealous girl taking a picture of anyone who was being photographed by everyone else with a camera. I remember distinctly taking a picture of someone walking across Lincoln Center and then hearing someone shout, "Be original!" turned around, and saw a man who had presumably taken the same picture. I was offended and annoyed that he had insulted my originality. Why couldn't I have the same photo as him if I liked what that woman was wearing? At the time, I rejected his opinion. But a year later, I realize now that though his method of communicating it was wrong, his idea was right. When everyone has the same picture of the same person, we post it on our respective blogs and websites and subsequently saturate the Internet with a harmful subliminal message. We are telling those who see this person repeatedly on their computer screen that this is fashion; this is what was deemed worthy by Mr. Newton and Tommy Ton. Anything else is subpar. The issue with this is that it isn't true. Fashion is subjective, and saying otherwise is highly hypocritical. What is trendy one season maybe be considered an eyesore a few years later. Take the emerging trend of wearing colorful running shoes with tailored clothing: a mere few months ago, if a woman wore her Nikes out on the street, she wasn't considered fashionable -- she was seen as a bum that couldn't handle wearing three-inch heels to buy groceries. But as soon as Leandra Medine sports (no pun intended) sneakers with one of her sartorial creations, everyone realizes that maybe they aren't as dorky as they thought. Soon thereafter, everyone miraculously owns a pair of offensively bright trainers.

Street style photography has become something of a meter that bloggers and show-goers measure their outfits against, and consequently their self-confidence is either compromised or boosted. Being photographed by an established photojournalist produces a feeling of self-worth and seemingly commands respect, from the point of view of the subject. When my picture was taken by Bill Cunningham in February during Fashion Week, I was elated; I gushed about it to everyone I knew hoping to garner squeals of excitement and jealousy, which I did. As Leandra put it, "When I do find myself wearing snap-appropriate garb, though, there is an undeniable ego-stroking-rush about standing amid a bike lane by Pier 59, clutching my purse and coyly smiling at an army of click-click-clicks, calling my name and asking me to look over." Obviously, I wasn't bombarded by a sea of enthusiastic photographers, but the feeling is the same. As ecstatic as I was to share the news with the world that Bill Cunningham had photographed little ol' me, I had a nagging feeling in my gut telling me that it was all a sham. Maybe it was the masochistic part of my brain trying to strip the pleasure out of an event that was really too good to be true. It did happen, of course, but did Bill photograph me, or my clothes? After hours of contemplation, I defeatedly concluded that he was after what I was wearing, but those garments were not representative of my style. The success was illegitimate in my eyes after this point of realization. Let's be real: I never would have worn graphic-printed cropped pants with an ostrich feather coat and glittery platform shoes on a regular day. I knew I was going to be at Lincoln Center during a time of day when the tents would be thriving with life, and I dressed accordingly. There isn't anything wrong with dressing up for an occasion, but I have a lot of problems with wearing certain clothes to receive praise from others. Like Leandra, I admit that sometimes, or even often, depending on the time of year, I "put something on and either veto or acknowledge it's power to instigate a photo-snap." It's terrible and I know it, but the rush of joy derived from others' appreciation and acceptance is hardly worth compromising, according to anyone striving for attention in the fashion world.

Social media platforms such as Tumblr, Instagram, Pinterest, and even fashion blogs are responsible for this shift in authenticity within the street style sphere. Bloggers are often paid to wear certain brand's clothing as an advertising ploy -- they are prepared to rattle off a list of who they're wearing at any given moment. It's difficult to tell who is wearing their own clothes and when people are being planted in certain places to drive business. In a New York Times article written by Ruth La Perla last week on this topic, the founder of Digital Brand Architects was quoted saying, "We use stylists, we do color correction and Photoshopping, we scout locations every day. It often takes hours just to find the perfect street corner." That isn't street style photography. That is a magazine shoot. As tough as it is to differentiate between genuine and fake photo subjects, it may be just as hard to decide which photographers are staying true to their profession. Scott Schuman is one of the cameramen who is devoted to his career and does not see street style as a popularity contest; not-so-incidentally, he is one of the most successful of his kind. In an interview with the website Fashionista, Schuman said,"There is that element -- the [person who] totally wants to get shot, and dressed crazy... The people who shoot that and the people who dress like that, kind of deserve each other. It's the people who want to be famous, shot by people who want to make their blog famous." He hit the proverbial nail on the head.

I try to collect and post content on my blog that embodies my personal taste and ideas, but sometimes it's harder than it looks. I advocate for an "I dress for myself and no one else" doctrine on personal style, but when everyone else is wearing expensive, well-known brands, high heels, and lots of make-up to a fashion show, I can't help but feel naïve, underdressed, and out-of-place in my homemade pants, hand-me-down riding boots, my school backpack, and a bare face. I almost feel like apologizing, as though I should be sorry for not being as put-together as everyone else. But I know that if I were to walk into a room wearing something that I didn't wholly believe was crafted in my own brain for the purposes of self-expression and practicality, I would feel exponentially worse. Scott Schuman understands this concept as well: "When I shoot her [the girl on the cover of his book], it's not at all about the brands, or about how much it costs. It's the way she puts it together. It's the persona that she's building." Those with a true love of fashion, not fame, and an eye for style can see when someone is a diamond in the rough and when they blend into the background. 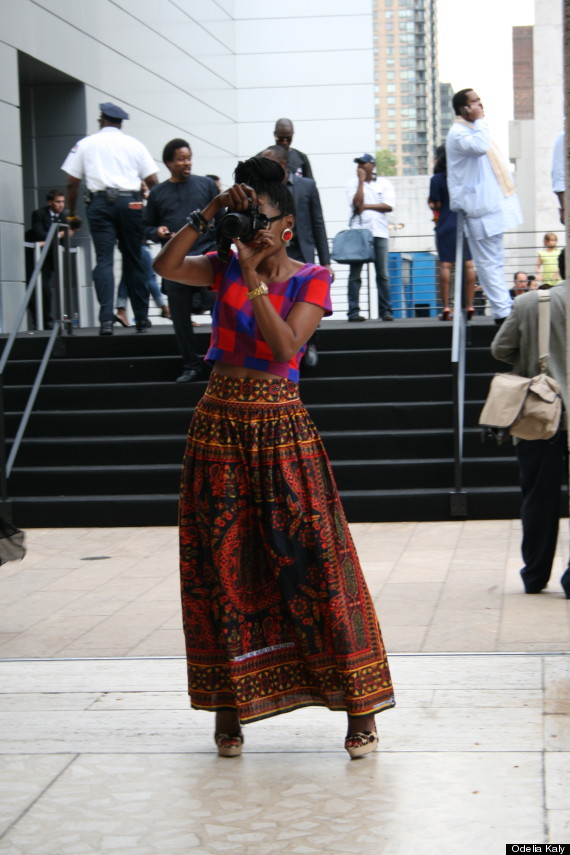