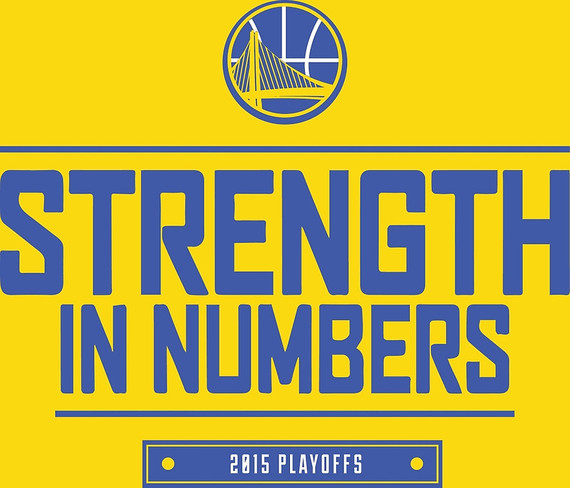 Before the excitement of the Golden State Warriors' NBA championship fades away, take a good look at the leadership styles and behaviors of Head Coach Steve Kerr, regular season MVP Stephen Curry, Finals MVP Andre Iguodala, and regular season starting center Andrew Bogut. I can't think of any more powerful examples of teamwork and power sharing that what those individual Warriors and their teammates have just demonstrated.

I'm writing this note in the midst of San Francisco Bay Area's giddy euphoria over the Golden State Warriors winning the NBA Championship for the first time in 40 years (Moses in the desert had it easy compared to the drought we've suffered through).

Yes, it's a moment to gloat and to savor. But it's also an experience filled with lessons for business leaders. If there has been one common theme running through all the newspaper columns about the Warriors' victory, it is how selfless the team members -- and the coaching staff -- have been all season long.

Yes, Stephen Curry was the league's Most Valuable Player for the season. And he won the All-Star three-point shooting contest. He's a genuine superstar -- and he is certainly the team's day-in-day-out leader on and off the court. But he is also genuinely humble. In the words of SF Chronicle sportswriter Ann Killion:

In his six seasons, he has changed the perception of the Warriors. He's aesthetically a joy to watch play, like [Willie] Mays and [Joe]Montana. He's likable and humble and has broken the mold of what an NBA player looks and plays like.

Most of the front-page pictures of the championship team show Curry holding the trophy. But most of the praise was about the way he shares the ball, often passing off even when he has a good shot. While Curry averaged 24 points per game over the season, he also produced almost eight assists per game. And his sharing the glory sets the tone for the whole team.

Yes, it was fun watching Curry knock down three-point shots, but it was far more rewarding to see the Warriors passing the ball so quickly you could hardly follow it, and you had to wonder how they found each other so open. Scoring was incredibly balanced across the team, and the leading scorer was different almost every night. What's more, the Warriors bench almost always outscored the opponents' second-tier players.

That degree of unselfishness included (and no doubt started with) the coaching staff. Steve Kerr, in his first year as an NBA head coach, relied heavily on his assistants throughout the season. He was first and foremost a listener.

In fact, the boldest and most successful move he made during the Finals was to bench Andrew Bogut, the starting center for the entire regular season, in favor of Andre Iguodala, a smaller, more nimble player, for the final three games. That decision came after Game three, when the Warriors were down two games to one.

Why is that such a big deal? The idea of starting Iguodala in place of Bogut came from Nicholas U'Ren, a young special assistant to the head coach. U'Ren is not even a regular member of the coaching staff, but Kerr listened to him, thought through his suggestion, and took a huge chance by abandoning the starting lineup that recorded a 67-15 regular season record, the best in the league.

And Steve Kerr not only listened to Nick U'Ren, he gave him full credit. As Yahoo Sports reported:

"He's behind the bench, he's 28 years old, he's a kid," Kerr said. "We have a staff that is very cooperative. Whoever has the idea, it doesn't matter. And he brought me the idea."

Iguodala was as much a contributor to the Warriors' culture and style as Curry. A former All-Star 10-year NBA starter, and Gold Medal Olympian before he came to the Warriors, Iguodala agreed to a nonstarter role (for the first time in his career) at the beginning of the season. And as frustrated as Andrew Bogut must have been when he lost his starting role, he never once complained publicly or challenged the decision. The team's focus on winning as a team is remarkable.

It is also notable that Stephen Curry did not receive a single vote for Finals MVP, while Andre Iguodala was the first NBA player ever to win the series MVP while not starting every game.

The lessons for business leaders are as clear as can be:

Jim Ware is a workplace/workforce futurist. He works with senior executives who want to take charge of their future by attracting exceptional people, leveraging innate talents, and increasing productivity. He is a former Harvard Business School professor who has spent his entire career helping clients invent their own futures by exploring and interpreting the changing nature of work, the workforce, and the workplace. Jim facilitates conversations and collaborative learning, builds scenarios of alternative futures, and transforms ideas and insights into bottom-line results. He holds PhD, M.A., and B.Sc. degrees from Cornell University and an MBA (With Distinction) from the Harvard Business School. He lives and works in northern California. Visit his website at http://www.thefutureofwork.net.