Liberia has less than 13 months to assume full responsibility for its own security, as the UN peacekeeping mission in the country since 2003 continues to draw down. With many Liberians uneasy at the prospect of an eventual withdrawal of the mission, the government needs to establish clear priorities now to be prepared. 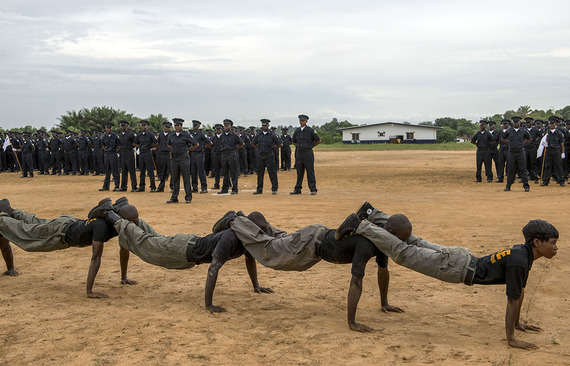 Liberia National Police cadets undergo training as part of the country's efforts to beef up law enforcement capability. Security remains a predominant concern among the population as the UN peacekeepers draw down. UNMIL Photo/ Staton Winter

At the height of the Ebola crisis last year, the UN Security Council pressed the "pause" button on the UNMIL drawdown, acknowledging that the epidemic posed a threat to peace and security. But Liberia has beaten back the virus and, on May 13, the drawdown of the United Nations Mission in Liberia (UNMIL) resumed.

Celebrating the opening of a new school after Liberia is declared Ebola free.

UNMIL had more than 15,000 troops in the early years of the mission, which was established in 2003 after the end of the long civil conflict. By mid-September, the number of UN military personnel in Liberia will be about one-fifth of that.

These troop reductions, which began several years ago, will continue through June 30, 2016, the deadline set by the UN Security Council for Liberia to take over the security tasks still carried out by UNMIL.

Liberia has made great progress in 12 years of peace. But many Liberians remain "jittery," as one minister remarked last month, about the prospect of UNMIL leaving too quickly, and question whether their government is prepared to take over.

Liberians are now being asked, in effect, to transfer the trust they have in UNMIL to their national police. Despite significant improvements in policing, the public needs evidence that police actions will be impartial, restrained and principled. The Liberia National Police (LNP) also need to be a visible presence in more of the country.

A Government minister addresses residents of Toe Town, Grand Gedeh County, to dispel fears of insecurity ahead of the withdrawal of UN peacekeepers from the area.

Over 60 percent of the LNP are clustered in the capital. Elsewhere, the LNP often depend largely on UNMIL for mobility. There is as yet limited accountability for police vehicles, which often go unrepaired and are then abandoned. Some police vehicles go missing without a trace.

Liberia has no shortage of needs, especially in the wake of the Ebola crisis. But justice and security must become much higher priorities for the government as UNMIL draws down. These sectors are not only critical to sustained peace, they are part of the bedrock of development.

Liberia's mining and other concessions - principally iron ore, timber, rubber and palm oil - are assumed to be the drivers for national growth. Since the end of the war, there has been a reported inflow of $16 billion in foreign direct investment, largely in these concessions.

But these concessions are also hot spots for tension and violence.

I recently travelled to Sinoe County, where violence had broken out on the morning of May 26 at a major oil palm plantation. Seventy-two UNMIL police personnel were deployed to the scene to help restore calm, along with UNMIL civilian staff.

The UNMIL police withdrew by the end of the day, with the situation calm and Liberian security in control. However, when I spoke with the local administration and concession managers about the events, they talked soberly about what the outcome might have been without the UN intervention. Simply put, without adequate security, these investments will be at risk. As the Minister of Justice has noted, without a climate of security farmers in their fields are at risk, too. And a well-functioning system of justice is needed, to deal fairly with criminals, and strengthen accountability. Here, too, absenteeism poses significant problems throughout the country.

The government and security forces are aware of shortcomings and have expressed their commitment to continue improving capabilities. Their needs are set out in the Government's three-year Security Plan for UNMIL Transition. Residual responsibilities that UNMIL will soon hand over include the destruction of explosive remnants of war, security at Liberia's two largest prisons, and presidential guard duty. The government did well in meeting the plan's early benchmarks. These include moves to increase the number of recruits within the Liberia National Police and the Drug Enforcement Agency by 450, ratifying the Arms Trade Treaty on April 21, and taking over responsibility for marking and registering arms. Critical legislation, such as a Police Act, is being drafted.

Still, the plan is acknowledged as overly ambitious, and its priorities need to be re-ordered. This is an urgent task, as is identifying which parts of the plan - such as recurrent costs, notably salaries - will be met, appropriately, from the national budget. Without this clarity, it will be very difficult for Liberia's donors to provide funding for the plan that is crucial to Liberia's future.

UNMIL will continue to work closely with the Liberia National Police, the Bureau of Immigration and Naturalization, the Armed Forces of Liberia, and the Ministry of Justice to strengthen capacity throughout the transition period. On July 10, Liberia will present its Economic Stabilization and Recovery Plan to its partners at a pledging conference in New York convened by UN Secretary-General Ban Ki-moon. The plan includes a justice and security component, in recognition of the importance of these sectors to Liberia's post-Ebola recovery and continuing development. "It's time for us to pick up from UNMIL", I hear ever more often. "We know UNMIL won't be here forever!" Just as Liberians are proud of having beaten back Ebola, we hope they will in future years be able to reflect with pride at taking back full responsibility for law and order.