As National Stress Awareness Month draws to a close, we wanted to see what our polling database could tell us about stress and its related factors. What better place for us to publish our results than on The Huffington Post, where Arianna and her team have shined a much-needed spotlight on the crisis of stress in American life?

You don't need fancy algorithms to identify the common drivers of stress, like financial hardship, health problems, personal loss, or workplace angst. Nor do you need a Ph.D. in machine learning to find the most prevalent effects of stress, like overeating, substance abuse, insomnia, or depression. But, with a large enough dataset and tools, what else can we find beyond these better-known stress correlations? 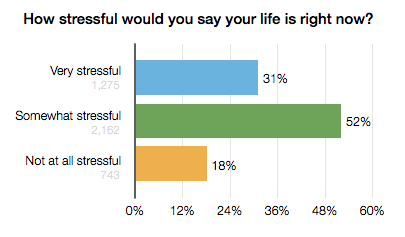 As we can see, 83 percent of respondents acknowledged that their lives were at least "somewhat stressful," with nearly a third of all adults characterizing their lives as "very stressful."

Digging deeper, the next big question is "Who is more stressed than others?" So, we examined the various demographic variables about respondents in our database. Here are some key findings across gender, age, race, and annual household income. (Note: The number in () represents the degree to which this group answered "very stressful" or "not at all stressful" more than average.)

It's no wonder women face more stress than men. They hold entire families together and, well, they deal with men. But it's interesting to note that people in our highest income category are much more stressed than those in the middle or upper-middle income tiers.

Next, we explored hundreds of additional lifestyle characteristics to see what correlated with stressful and stress-free living, respectively. Included in this wave of analysis were questions about employment, parental status, health, and wellness. Here are some of the strongest correlations we found:

Yes, having kids of any age is stressful, being unemployed is terrifying, and dealing with leases and landlords just plain sucks. The saving grace is that when we finally retire, we see one of the strongest correlations with a stress-free life anywhere in our database.

News flash: Exercise, diet, and sleep are keys to a stress-free life. It's worth reinforcing, though, that one of the least stressed groups in our database were people who never eat fast food. Conversely, the most stressed people we found were those who used to take yoga (because they needed it) and no longer do.

Next, we looked at the respondents' self-image and found that these attributes produced some interesting insights:

Um, well, let's be clear on this one. We're not saying that "being unattractive" leads to stress. It's probably more accurate to say that "believing you're unattractive" is a symptom of other confidence issues that lead to stress. Not seen here but worth highlighting is that people who say they are "more attractive than average" were actually more stressed than people who characterized themselves as average.

Finally, let's look at some of the more off-the-wall things we uncovered.

Chill out and grab a newspaper. It's good for the soul.

Quit worrying about what your friends say and do on Facebook. Their lives are just as imperfect as yours.

Apparently, they call it "fighting like cats and dogs" for a reason. Sure, you love your pets; just be aware that they're likely to add more stress to your life than they relieve.

If you're tweaking about black cats, the number 13, or broken mirrors you're stressing over nothing. Stop.

Lastly, if you have any theory why compact car drivers are so stressed and truck drivers aren't, please let us know. We've been debating it for days.