Twenty-one miles. That's the point in every marathon where I ask myself, "Why the hell am I doing this? This is dumb." But there's still five miles left.

These are the ramblings of my mind under intense stress. It's not dumb. It's a test of my endurance. And I'm doing it because finishing a race is personally meaningful. I'll remember this a week or so later. That's why I keep an important rule: I don't make decisions while running marathons. Once I'm going, there's no quitting, and there's no internal discussion about the next one.

This sounds like common sense, I'm sure, but how many times have you made a bad decision in the middle of an exhausting, stressful situation? We all do it even though we all shouldn't.

Thankfully, there are some simple tactics you can use to make sure you don't keep doing it in the future. Or, at least, not as often. 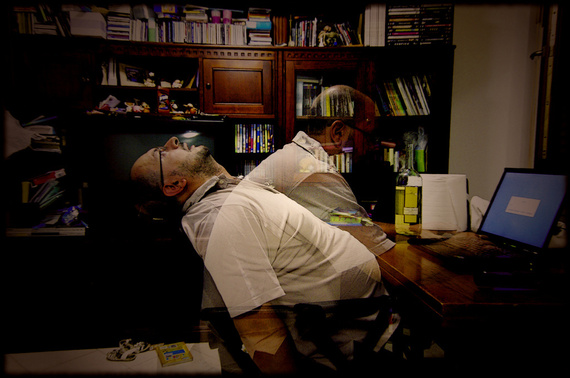 If there's anything we know college students are good for, it's psychological testing and making poor choices. In 1987, Giora Keinan -- a researcher at Tel Aviv University -- gathered 101 students and asked them to make a series of choices. Each paradigm had a clear winner, clear losers, and the students were given as much time as they wanted to choose an answer.

"What could go wrong?" you ask. You wouldn't be reading this if everything had gone right. Many students ended up making poor choices they'd later regret. That's because there was one other variable at play in this experiment: stress.

Some students were given a quiet, contemplative environment. Others were subjected to varying levels of stress. Some stressors were out of the student's control -- it just happened to them -- but others had the power to control their stressors.

As you've already guessed, the students with the perfect scenario made logical and rational decisions -- they made the right choices. And, as you certainly suspect, the ones who were under a great deal of uncontrollable stress did terribly. They couldn't come to smart solutions to save their lives.

Here's where it gets interesting, though. The same was true of students who were under just a little stress -- even when that stress was in their control. They failed the decision tasks over and over. [1]

The conclusions of the experiment were straightforward. It doesn't matter what kind of or how much stress you're under. If you're feeling it, you're going to slip up when it comes to making good choices.

So what do you do when your stress levels are through the roof and you have important decisions to make? You need a strategy.

How To Set Yourself Up For Success When Stress Is High

Stress isn't bad. In fact, many types are good. If you have any ambition at all, you probably feel it often. But the science tells us even if you enjoy the stress in your life, it can do awful, terrible things to your ability to make smart choices.

This is why you need a strategy for managing stress and making effective decisions. For the most part, the strategy is simple: Don't make big decisions when you're pulling your hair out. Instead, hold yourself to a few important rules, and never break them:

1. Don't let stress motivate your decisions. Don't swear off marathons at mile 21! When you're feeling the most stress at work or during a big project, you'll also be feeling the biggest urge to make a poor choice. You might make your mind up in these moments, but don't hold yourself to them. Always re-evaluate when things calm down.

2. Save 30 minutes each day for de-stressing. When you're under regular stress, things feel more desperate -- like you'll never get the chance to make good, rational choices. But you don't actually need very much time to change that. If you can set aside 30 minutes each day to do something relaxing -- exercising, reading, even watching TV (if it's all you can muster), you can get yourself in a good state to make smart decisions.

3. Run your decisions by someone calm. It never hurts to have a second opinion when you feel like you might be making a choice under pressure. When you're stressed, you can't see or evaluate all the options, so running your scenario by a calm and trusted friend can quickly reveal blind spots you might not have considered.

The quality of life you live and your ability to do the meaningful things you set out to will depend almost entirely on the decisions you make. Here's one more small set of tools to use to make sure your choices are the best ones possible.

1. Decision making under stress: Scanning of alternatives under controllable and uncontrollable threats.