If you take a close look at stress over the course of a busy week, you're likely to discover that stress is happening in you far more than to you. It has more to do with the anxious way you relate to people and events than with the events themselves.

"We humans generate all sorts of stressful events purely in our heads ... linked to mere thoughts," states Robert Sapolsky, one of the world's leading stress researchers. 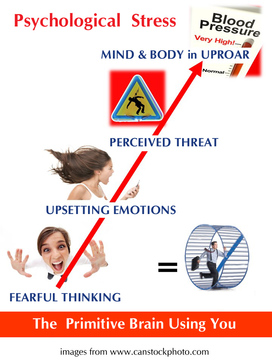 It's the way worried, pessimistic, stress-provoking thoughts ignite upsetting emotions that generate a sense of threat, when a real threat isn't verifiably present.

It's called psychological stress and it can flood your system with adrenaline and cortisol, sending your mind and body into an uproar. If these kinds of stress reactions become chronic, it will gradually wear out your body, depress your mood and could contribute to killing you. And it all begins with the stress provoking thoughts we think.

Recall the last time an email caused your mind to race with anxious thoughts, painting you mentally into a tight corner. This tight corner makes the world appear threatening, and we believe the threat our mind imagines is real. But it isn't real; it's the mind making up emergencies that the primitive brain assumes must be happening simply because you imagined it. The primitive brain possesses the intelligence of a two-year old, and when it senses any kind of danger, real or imagined, it sets off a fight, flight, or freeze reaction.

For the last 500 years, we've been quoting the great French statesman Michel de Montaigne, who said, "My life has been full of terrible misfortunes, most of which never happened." There's now a study to back up Montaigne. This study found that 85 percent of what we worry about never happens, and that the 15 percent that does happen turns out better than we expect. We laugh at Montaigne's comment because we see ourselves in it, but we often miss the message.

So here's the message: most of our stress is a form of mental suffering we inflict on ourselves by believing thoughts that aren't even true. 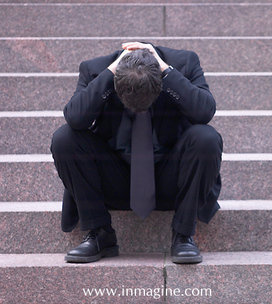 I knew a lawyer who was in litigation over a dispute between two large corporations. There was a lot at stake and this lawyer, who I'll call William, thought he was losing the case. He blamed it on the opposing litigator, who he described as unscrupulous and crooked. William was stressed about the case and he was becoming increasingly difficult for his legal team to work with. He was taking the case home at night. He thought about it incessantly, lost sleep over it, and as his stress level increased, he began to lose his edge and make bad decisions. By the time I ran into him he was exhausted.

Biologically, where there's stress, there's fear, so I asked William, "What are you afraid of?"

"Losing the case, of course," he said glaring at me as if I'd asked a stupid question.

"And if you lose the case, what are you afraid of?" I asked.

"And what's the fear of looking like a fool?" I asked.

"I'll lose my reputation," he said, and I could see terror flash in his eyes.

"So what's the fear of losing your reputation?"

"Well ... I'll lose my clients ... and my job ... and my livelihood." All at once, he looked like a deer caught in headlights. When I asked him what he was feeling, he said, "I see myself pushing a shopping cart down Main Street."

You can see in his last statement how far the mind can travel when we are afraid and really stressed. This was the story running in the back of William's mind, and the more stressed he became the more he believed the story.

So, I asked William, "Have you lost the case yet?"

"Any chance you might turn things around and win?" I asked.

"Well, yes," he said. "I suppose there's an outside chance. You never know what a jury might do."

Next I asked, "Do you really think people see you as a fool?"

"No," he said somewhat self-consciously. "People respect me."

"If you lose this case will you really be in jeopardy of losing your clients?"

"No, it's not very likely," he said. "Everyone knows you win some, you lose some." He began to breathe easier and the lines on his forehead began to relax.

"Will you really be asked to leave the firm if you lose the case?"

"No," he laughed. "They're making me a partner." It was the first he'd smiled in some time.

"So," I said, "It's safe to say that you won't be pushing a shopping cart down Main Street any time soon, right?"

So I asked William: "Who would you be without these fearful thoughts?"

"I'd be calm," he said. "My mind would be clear. I'd sleep better. My decision-making would be a lot smarter. And I'd be nicer to my team."

This had a happy ending: When William went back to work on the case, he was at the top of his game. He wasn't undermining himself with stress-provoking thoughts.

A better life is as near to us as our own thoughts. In the last twenty years, biology has established that the vast biochemical environment that constitutes our brain and body is shaped by our mental state. So, become keenly aware of stress-provoking thoughts and tell yourself, these thoughts are in me, not in reality. Then choose not to believe them. If you don't believe a stressful thought, it doesn't turn into stress and anxiety. The ticket to the health, wealth, and love we seek is cultivating a mental state that every day brings a little more peace into our experience, a little more empathy into our heart, and a little more gratitude into our attitude. This is how the door swings open to a better life.