Yet another brand has angered parents by marketing to girls and boys separately and using antiquated gender stereotypes to do so. This time, ads by shoe company Stride Rite suggest girls are princesses and boys are powerful. The ad featuring a young girl is pink, purple and sparkly while the boy ad sticks to conventional "masculine" colors. 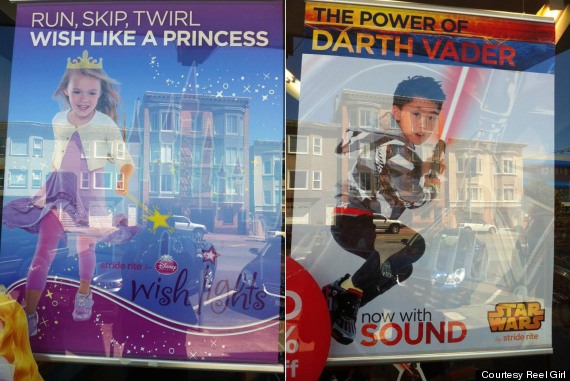 Margot Magowan, a mom of three girls, wrote a letter to Stride Rite explaining why she will no longer be shopping there and posted it on her site, Reel Girl. "What’s with your gender stereotyping? I don’t get it. Aren’t girls and boys feet pretty similar? Don’t all kids need shoes where they can be active? Please tell me why Stride Rite markets shoes to little kids as if girls and boys are completely different species," she began.

Magowan was also upset by the lack of female superhero apparel found at the store. There were Superman and Hulk socks, but no Wonder Woman or Black Widow to be found.

Her main concern, is that gender marketing is starting to influence her kids. Her youngest daughter, age 4, usually chooses shoes from the "boy" side, she writes, but mom is worried that will soon come to an end. "Their choices become more limited as they repeatedly see that girls are supposed to be so radically different than boys, only wear certain colors, and behave in a certain 'feminine' way," Magowan writes.

A representative from the store provided the following statement to the Huffington Post in an email:

At Stride Rite Children’s Group, we develop footwear that are designed specifically to meet the needs of growing children, while offering a broad range of products in a variety of styles of interests for both girls and boys. We have an ongoing and rotating calendar of product promotions featuring various shoes and our store windows were focused on two of our licensed products. Customer feedback regarding our stores and advertising is important to us and we are taking it into consideration.

But this isn't the first time Stride Rite's marketing has been under fire. Rebecca Hains, an author who writes about children's media culture, noticed the vast separation at Stride Rite last year. She posted photos of two signs -- one instructing girls to "sparkle with every step" and one that shows a little boy in action. Hains argues that the messages suggest to girls that "it’s more important to keep their sparkly shoes looking pretty than to play." Hains navigated Stride Rite's website and based on different descriptions, interpreted the theme: "Girls are meant to be looked at, so their play shoes are a route to prettiness, while boys are meant to be active, so their play shoes are made for play."

Jezebel's Callie Beusman explains how this type of juxtaposition can also influence how kids behave. "Boys are allowed to be rough and rugged and playful. Girls, on the other hand, must be pretty and shiny and passive," she writes.

Over on the Pigtail Pals' Facebook page, commenters generally agree with Magowan's letter, but are unsure what the solution is given that Stride Rite is hardly the only culprit. Back in February, Skechers' "Daddy'$ Money" shoes caused controversy as parents claimed the line and commercial sent all kinds of terrible messages to young girls.

That's why groups like Pigtail Pals, PinkStinks and PrincessFreeZone are working to end gender stereotypes for good in order to just let kids be kids.