If you believed Bitcoin was the only currency fighting central regulation, think again.

Not only are there alternative currencies born every day, but Anthem Blanchard is resurrecting one from the past.

Gold -- we wear it, we admire it, but what's all this hype about owning it?

Over the last ten years, precious metals prices have soared as the dollar's deflated. Many people are growing skeptical of our increasingly volatile currency, and find this free-floating fiat money, and all other currency not backed by commodities, to be culpable.

It's not just extremists--political commentators and economic experts warn of the repercussions of this instability. George Soros famously made billions from currency crises, and more recently, a billionaire hedge funder began betting on the price of gold given the increase in money printing.

Without something like gold to back paper money, the dollar has demonstrated frequent and rapid shifts in value--which many fear may lead to a plummet reminiscent of the Great Depression.

Thus, many Americans are looking to other means for wealth holding. Gold, a historically stable money, has become an ideal asset for fearful investors.

Anthem Blanchard with Anthem Vault is revolutionizing the gold-storing process, while also working to make these shiny blocks a new form of currency. 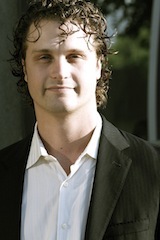 Anthem and I have a personal connection; Anthem's father, Jim, was a great friend, and pioneered the legalization of gold after purchasing became illegal in 1933 by Executive Order 6018. He founded and then sold the top precious metal coins company in the world.

Jim and I also bonded over our interest in political economic theory; he accepted my dislike of the atheism of objectivism, and we shared a fascination with the rich US history of gold--an interest that has continued on to Anthem.

Jim and I studied the movement of money: from bank notes invented as IOUs representing actual coins and gold, to currency brokered by central banks, to the government ban of gold buying and selling, to the deregulation taking banknotes from gold backing. Now, they are little more than freely printed IOUs from the central bank--our Federal Reserve.

One mistake I made was to initially use the name Blanchard Vault to honor our family's multigenerational legacy in the precious metals business, which the current owners of the coin company Blanchard & Company were not particularly thrilled with and also confused our branding. We changed our name to Anthem Vault upon our full launch into the marketplace, and haven't looked back since.

When I heard about Anthem Vault, I wanted to learn more. Anthem Blanchard sat down with me, sharing the ins and outs of bullion-storing and trade. 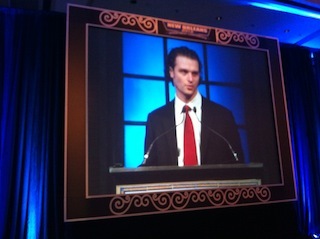 Steve Mariotti: What inspired you to create a company like Anthem Vault?Anthem Blanchard: I was inspired to make physical gold and silver ownership easy, secure, liquid, fun, and affordable for everyone. Providing a service to assist others with preserving their wealth is an important life mission of mine, and the driving force behind founding Anthem Vault. Our long-term goal is to see precious metals recirculate again as forms of currency, and our daily goal is to increase the utility of the metals that have proven to be excellent time-proven stores of value.

SM: What is so significant about gold ownership? Why not just keep your money in printed currency? AB: Fiat money, or money that derives its value from a government's decree, can be created out of thin air by a very small group of academics. Hundreds of billions of dollars worth of fiat money are created each month by government central banks, largely in order to buy government-created or government-guaranteed debt. Every fiat currency in history has eventually collapsed as a result of too much currency creation. [Ed. Note: there is a great deal of debate going on regarding this topic. You can read more here.]

Gold is held as a core reserve asset by central banks around the world because gold has proven itself as a store of value over centuries largely for the reasons described above. Gold is currently viewed and held by a majority of the world's population as a store of value, and often passed down from generation to generation. Practically the only place this viewpoint is not shared by the majority is in the U.S., and this is likely because many people still believe the dollar is 100% backed by gold bullion--when in fact only a small portion is still backed by gold, less than 20%.

SM: Why would gold be a more stable and sustainable currency than paper money?AB: Trust through universal recognition and acceptability is the key factor behind a good store of value. Gold is the physical store of value that most possesses this trust globally. The best currencies, as gauged by their effectiveness facilitating business activity, are the most stable. It is much more unlikely that a giant new gold deposit that would dramatically affect the market will be found versus the likelihood of continued increases in creating paper money by global central banks. 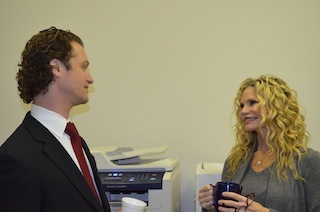 SM: So your company competes against traditional banks, but what are your competitive advantages? AB: Anthem Vault's main advantages over traditional ways of buying gold & silver coins and bars stems from the flexibility of our fractional metal ownership model, which enables our clients to purchase parts of a bar or bars in increments as small as $25, and the ability to sell as little as $1 of metal at a time. As opposed to storing coins and bars at home--which poses a major personal injury and financial risk to the owner as most home insurance policies only cover precious metals up to a maximum of $1,000 of value--we offer clients professional-grade storage in Salt Lake City and 100% insurance through Lloyd's of London against any loss by natural disaster or theft at very competitive storage rates.

Our primary competitive advantage over gold security products such as metal futures contracts or ETFs is that all metal held with Anthem Vault remains the client's property. Protected by property law, no liabilities or claims can be made on a client's metal held in their account by third parties as a result of any liabilities of Anthem Vault. This is a very important legal distinction from an ETF, which are securities that must be held at a stock brokerage company and are legally exposed to any liabilities of the brokerage's underlying holding bank as well as liabilities of any bank custodians if used to safeguard metal. This is referred to legally as credit risk, and is fundamental to banking. In addition, if an ETF's trustee were to ever be sued in a class action lawsuit for some impropriety, any expenses incurred would be deducted from ETF holdings. 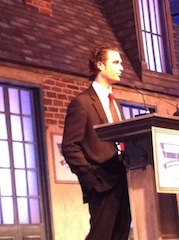 SM: Who is your customer? AB: Our current clients are U.S. residents of all ages and also those who have retirement accounts, as clients can buy physical metal with funds in their IRA. Those who are over 40 years old tend be our largest clients but one of the beauties of our service is that anyone who has as little as $25 to purchase metal can participate.

SM: How did you raise the capital to start your business? AB: I initially self-funded the company to launch the business, and have since raised capital in the form of angel investment from accredited investors to provide the company with sufficient working capital. In addition, we are working on a large-scale equity raise through a 506(c) offering in the next month or so, which will allow the company to publicly solicit the offering (Regulation D 506(c) is a new safe harbor introduced in September as a result of the JOBS Act that allows public solicitation of private U.S. securities offerings for the first time). My view is that a company should always be in the mode of raising capital so long as productive uses for deploying the capital are identified.

SM: What have you learned about business since starting Anthem vault? AB: Just as is the case for most aspects of life, business is mostly about people and relationships. Try to identify and associate yourself with others who are experienced in your industry, especially if the industry is new to you.

Business in general is fluid, and especially in the startup and early stages of a company. I created a business plan, which has seen several small edits since the first version. Plans change based on opportunities that present themselves. Marketing activities are one example, as it takes a good deal of trial and effort to learn how to continue to lower your client acquisition costs.

From a fundraising perspective, it is important to have a business plan with financial projections included, although a short two-page executive summary presented with lots of enthusiasm is most important of all.

For innovators like Anthem, working in gold currency has its limitations: they must respect the regulations currently guiding precious metals. But that won't stop Anthem--Anthem Vault is looking for ways to expand their business to better serve their clients. That could mean that soon, Anthem Vault customers could access credit through their gold holdings!

Special thanks to Lauren Bailey and Maya Horgan for their assistance on this article.