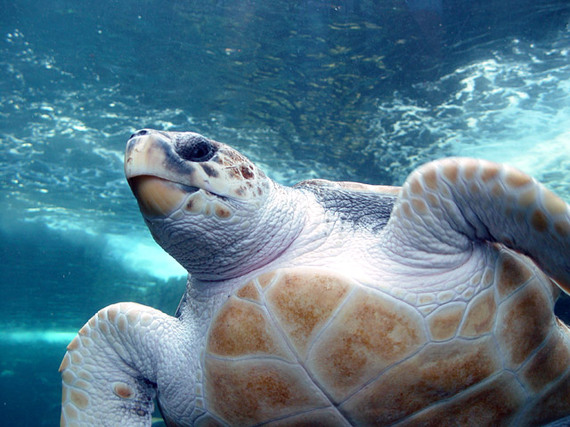 Have you heard about the disastrous gold rush brewing in our oceans?

Not content with getting minerals from dry land, companies are now aiming to strip mine our ocean floors in search of nickel, copper, cobalt, gold and other valuable metals and minerals. Many of them would end up in our electronics.

But there's a heavy price to be paid: Like mountain-top removal mining, deep-sea mining involves massive cutting machines that will leave behind barren, underwater landscapes -- some of the richest and most pristine ecosystems left on the planet.

This week, the Center for Biological Diversity (where I work) took the first steps in slowing down this deep sea gold rush by filing a lawsuit challenging the permits that the U.S. National Oceanic and Atmospheric Administration issued to a Lockheed Martin subsidiary to mine the mineral-rich Clarion-Clipperton Zone in the Pacific Ocean, about halfway between Hawaii and Mexico.

While there's much that we still don't understand about life on the deep sea floor, we do know that the Clarion-Clipperton Zone is teeming with wildlife, including sperm whales, spinner dolphins, loggerhead sea turtles, great hammerhead sharks and a vast array of fish, corals, snails and sponges.

These ecosystems -- many of which are so remote and deep that they remain largely a mystery to science -- would suffer irreparable harm when the miners move in.

And yet, Lockheed Martin and other powerful corporations are quickly moving to strip-mine precious metals from the deep sea floor, with the cooperation of cash-strapped governments around the world, and regulators who barely know what environmental controls to suggest at this point.

It's a bit like the California Gold Rush that began in 1849, which forever altered land forms and river flows and left a toxic legacy still being felt today, such as with the American River fish that are too contaminated with the 49ers' mercury to eat. A better comparison may be mountaintop removal coal mining in Appalachia that has displaced communities of humans and wildlife in favor of toxic moonscapes denuded of life.

Is this to be the fate of our oceans, which contain the basic building blocks for all life as we know it?

The gold, copper, nickel, cobalt and other valuable metals and minerals being targeted lie in rich veins along the ocean floor, miles deep, often deposited there by hydrothermal geysers that regularly blast molten materials from the earth's core. Scientists didn't even discover these geysers until 1977, sending the first manned probe down five years later.

Cindy Van Dover, head of Duke University's Marine Lab, was on that expedition and she and other scientists have concerns that deep water mining could do lasting damage before we even understand what's down there. As she told National Geographic in 2013, "We haven't yet studied the ecosystem services and functions of the deep sea to understand what we'd lose. We don't yet know what we need to know."

Yet industry isn't waiting for those answers. With recent advances in mining machinery and steep price increases for these metals, thanks largely to the current technology industry boom and the demand for consumer electronics that use rare-earth metals, the race to the bottom (of the ocean) has officially begun.

Lockheed Martin is pursuing deep water mining operations in the Pacific Ocean through two separate subsidiaries permitted by the U.S. and Great Britain. When British Prime Minister David Cameron announced the latter deal in 2013, he predicted it would pump $60 billion into that country's economy over the next 30 years. And that's a drop in the bucket for oceans estimated to contain about $150 trillion (yes, with a T) in gold alone.

But it's frightening to contemplate how this would play out for our ocean wildlife. Deep-sea mining involves lowering massive cutting machines to the ocean floor to dig into the seabed, pumping the seawater slurry they create up to barges on the surface for onshore processing, and letting vast amounts of unwanted debris fall back through the ocean to the bottom, forming large sediment plumes in the area.

During the California Gold Rush, one might argue that the miners weren't aware of the damage that they were doing or the lasting impact to an environment that seemed so abundant and inexhaustible. Today, with our modern scientific understanding of our world and its often delicate ecological balancing acts, ignorance is no excuse for inaction.

Let's not repeat the mistakes of our past with a resource as important as our oceans. Before we allow a deep sea gold rush to destroy those underwater landscapes and life forms, let's take the time to understand exactly what we're getting ourselves into.