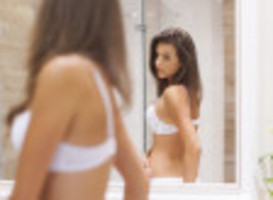 There's been a promising trend online and in advertisements towards loving the skin we're in. From the just released MAKERS series #YourBodyRules, featuring famous women dishing on body image, to one of the most inspiring series I've ever seen, StyleLikeU's "What's Underneath" campaign.

In an unexpected and ingenious way, a former fashion photographer and her daughter get people to bare down to their skivvies. What's uncovered? Truly breathtaking stories of courage, shame, insecurity and hope. It's real. It's thought-provoking. And it shines the light on our deepest common desire -- to fully embrace who we are.

Dove's Real Beauty campaign broke new ground back in 2004, featuring six women of various shapes and skin color. It opened doors and got a lot of press and yet in 2015, Dove's research shows there hasn't been much shift.

7 out of 10 women in The Choose Beautiful survey said they believe beauty is more than skin deep, but:

That's coming from 6,400 women ages 18 to 64 from five cities around the world. Something to think about.

Beauty expert from back-in-the-day, Michael Maron, has this to say in an upcoming interview with Riveting Riffs Magazine:

Advertising, media and the retouching in magazines has made women feel not enough. It makes so many women and especially young girls feel that they have to live up to these unrealistic expectations of what true beauty is, and it is all nonsense.

So my question is: When did we switch the real, the authentic, the "what's underneath" for the glossy, symmetrical and perfectly predictable?

We've been able to embrace and celebrate reality TV stars coming out, transforming and getting real with their bodies and their identities. I say let's take Oprah's suggestion and apply it to ourselves:

"Are you ready to stop colluding with a culture that makes so many of us feel physically inadequate? Say goodbye to your inner critic, and take this pledge to be kinder to yourself and others."

My guess is this won't happen until women feel truly supported in accepting themselves as they are. It's an inside job for sure, but the more we stand united against the photoshopped fantasy, the more we gain momentum in turning cultural views around.

More:
self-lovehealthy livingself-acceptancebody confidencecourage
Newsletter Sign Up
The essential guide to taking care of your mind and body
Subscribe to HuffPost’s wellness email
Successfully Subscribed!
Wellness delivered to your inbox