Big Coal giant and mountaintop removal king Massey Energy is getting strip-mined of its "Friends of America" rhetoric, and charged for sponsoring job-taking, water-polluting and land-destroying operations.

Update: The four protesters have been arrested, according to news reports.

This past Labor Day, Kentucky-born Massey CEO Don Blankenship spent millions of dollars on a concert and rally in Holden, West Virginia, and issued a bizarre diatribe against corporate America, the Obama administration, climate change scientists, and even called corporate giant Caterpillar "un-American."

I am exercising a spiritual obligation as a steward of Creation. It was not God's intent that these mountains be destroyed to enhance the wealth of a few individuals. ... This should not be solely a young person's campaign. Now that they have provided the example and inspiration, we seniors need to make a statement with our own actions and share the risks that are part of this ongoing effort to stop the obliteration of West Virginia's mountains.

As part of an extraordinary and amazingly creative coalfield uprising campaign this year that has included numerous blockades of devastating mountaintop removal and dangerous coal sludge impoundment sites, school protests, sit-ins of state agencies, and most recently a weeklong tree-sit action that halted reckless Massey Energy blasting at a mountaintop removal site in the Coal River Valley, Micklem was joined by James McGuinness, 53, Joseph Hamsher, 22, and Fred Williamson, 75.

Blocking traffic and holding up signs that read, "Stop Blowing up America," and "Protect God's Creation," Micklem is a native of Richmond, VA, where Massey Energy has its national headquarters. 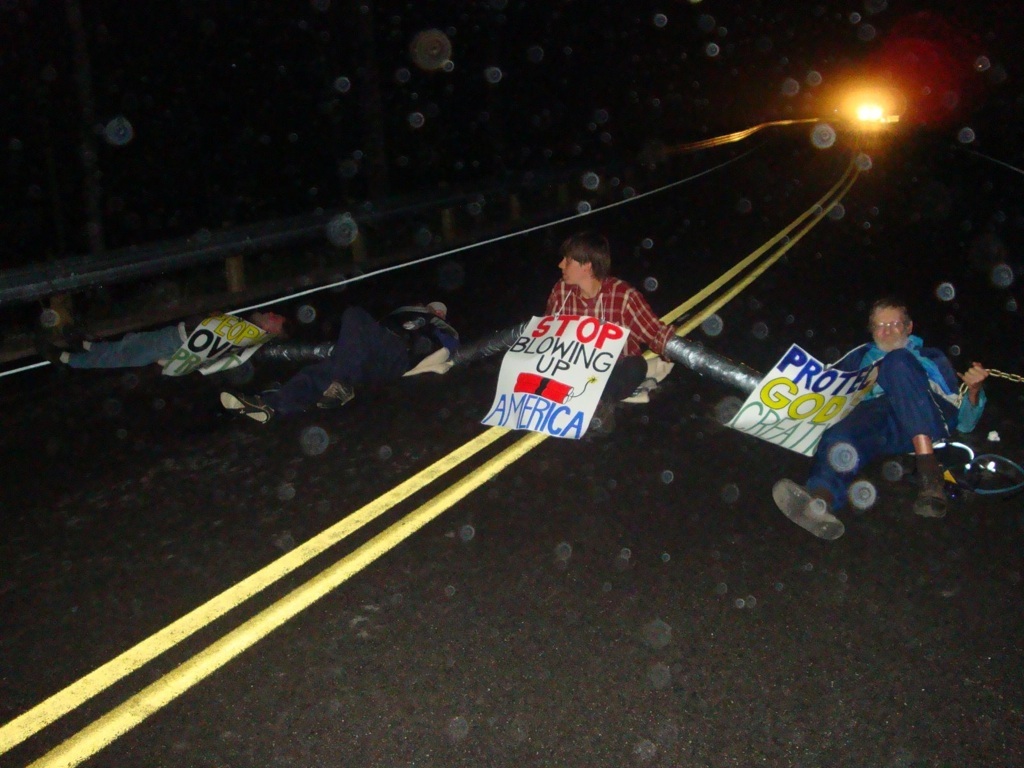 Massey Energy's brutal attacks on coalfield residents and the judicial system have drawn national criticism. In a stinging editorial last spring, the New York Times held up Massey's judicial corruption as a bellwether for the nation: Justice Not For Sale. The Times wrote:

The case involves a brazen -- and so far successful -- attempt by the chief executive of a large coal company to overturn a major damage award against his firm. A West Virginia jury decided that the coal company, Massey Energy, had fraudulently driven a small competitor, the Harman Mining Corporation, into bankruptcy proceedings. Massey's chief executive, Don Blankenship, decided to appeal. But before that, he spent an extraordinary $3 million to help elect a member of West Virginia's State Supreme Court, Brent Benjamin.

"There were many true 'friends of America' at their Labor Day rally, but not a single one could be found on stage," said Andrew Munn of Climate Ground Zero, continuing:

'Friends of America' are people who strive to make our land and lives better through their work, including those who commit acts of non-violent civil disobedience for the common good. Don Blankenship and men of his ilk are the fiends of America who profit from the violation of our rights of organized labor, clean air, clean water, health and the pursuit of happiness. Mountaintop removal and Massey Energy violate all of those rights, and we intend to take them back.

In Boone County, coalfield residents filed another suit against Massey this spring for contaminating their water supply. The suit charged that through Massey's "mining operations, the plaintiff's water was contaminated, thereby injuring them, their property and also resulting in and/or contributing to their deaths."

Hugh Caperton, who owned Harman Mining, said, "We have been fighting for 12 years to get these people's benefits restored. That has been the main focus of this fight -- to restore benefits to these miners and to pay off our vendors, who were mostly small mom-and-pop operations.

We hope to right the wrongs against Harman and its employees by [Massey Energy CEO] Don Blankenship and Massey.

Another miner who lost his job, Larry Cox of Vansant, Va., says the community is still reeling from Harman's closure:

Massey shut the whole company down when they bought United Coal Co. and took away our contract. That shut us down and put us out of work.

We couldn't find any coal mining jobs, so I went back to school and got electrical and plumbing papers. I got handyman jobs, but nothing permanent.

Former miner Louie O'Quinn, 62, had worked at Harman 25 years when the mine shut down, most of the time on underground belts hauling coal up to the surface.

"Everybody wanted to keep working at the mine. When you lose your job, it throws you into a scary world of unemployment."