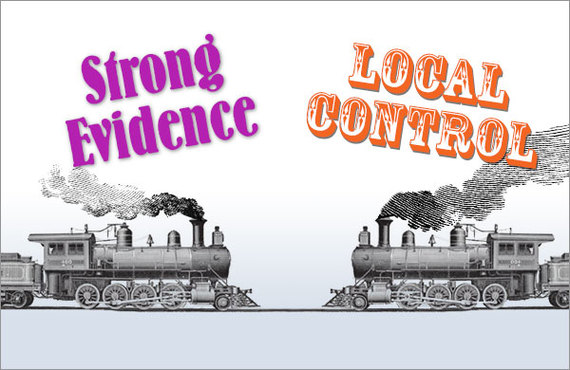 At the political level, the burgeoning evidence movement in education is running smack dab into a growing focus on state and local control of education. The Every Student Succeeds Act (ESSA) emphasizes state and local control and it's easy to see why. Educators, local and state policy makers, and the general public are tired of being micromanaged from Washington. But where does local control leave evidence? Does it make sense to have each state and locality select its own standards of evidence?

If there are established lists of proven programs as defined by ESSA standards, then state and local education leaders can choose to use the proven programs they think best for their schools and students, hopefully highlighting them when they make decisions. If this is how evidence is applied, then there is no conflict at all between evidence-based reform and local control.

While ultimate decisions are up to state and local leaders, it is entirely appropriate for the federal government to incentivize use of proven programs, as I've often urged in this space. For example, I've argued that in federal competitive grants, applicants could receive competitive preference points if they promise to adopt proven programs. This would involve a federal definition of "proven programs" for schools and districts that want the extra points. ESSA does exactly this with at least seven competitive programs. Locals need not seek the preference points, and they need not apply for discretionary grants at all.

Ideally, incentives should not be necessary to motivate state and local leaders to adopt proven programs. They care about their students and want them to learn, so why should they not actively seek the best approaches? Yet evidence has played so small a role in educational policy and practice up to the present that federal incentives may be necessary for a period of time to raise state and local awareness of approaches found to be effective in rigorous evaluations.

The Department of Agriculture has long sponsored research and development to identify productive farming methods, seeds, and so on, and proactively disseminates information about the findings, but has never, to my knowledge, required farmers to use these methods. However, farmers eagerly seek proven methods because they increase yields and efficiency. In the same way, the Department of Education can continue to sponsor research and development and proactively disseminate information on what works. Then it's up to local educators to put that information to work in service of improving outcomes for children.