The week after Thanksgiving, I had a bit of a meltdown. I realized that a lot of things were bothering me that I hadn't thought would be, and then criticized myself for letting them get to me. For instance, I realized that it did actually bother me that when I went home for Thanksgiving (literally less than two months after I'd left) my room that I'd lived in for more than half of my life was getting a complete overhaul. It did actually bother me that I felt like I had no place in my home anymore, even though I made the choice to leave. And despite these huge revelations, I still had school projects to finish, and I still had to go to work. I had too much to do, and no time to figure any of it out, or give any of it the time and attention it deserved. 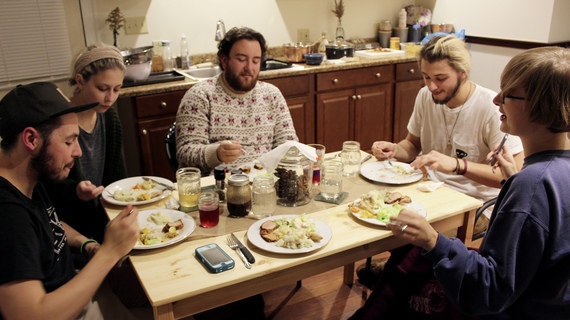 I felt like nothing was the same. Not my home or my job or my school or even my freaking hair. And then, Eli and I were just not communicating well. It's been a long time coming, this bout of us figuring it out. For a week straight, we had the same arguments. The same conversations over and over again. By Thursday, I was sick of it. I lost it. I stopped replying to texts, and I fled to the Art Park by my apartment to work on a project, because even in crisis mode I can't help but do my freaking school work. He met me there, and we hashed it out. We said everything we felt like we couldn't say, for fear of hurting the other person's feelings-- everything we'd never explored because up until three months ago we didn't have a place to have these conversations. Have them in the basement of my house when we only have two hours to watch a movie? Nope. Have them in his bedroom, with a million people walking by at all times? Nope. Have them in a car at 11 pm on a Tuesday night, when I have to be home by 11:30 and one of us has to drive 30 minutes to get home? Nope. We put it off until now, when for the first time in the timeline of our relationship we finally have a space to discuss, explore, and say what's on our minds. And we got it all out on the table.

When all of this change began a few months ago, I told him that I would need him. That when it feels like things aren't good with us, it feels like I have nothing, because literally everything else in my life is in transit. I'm trying to fight the feeling that that is unhealthy. Because it doesn't matter. It's just what it is right now. But I have hope, and faith, that it will change. After a bout of bad, we are good. We are communicating better, listening better, and expressing our emotions better.

I still feel stupid for getting upset in the first place. Because you see, if I get emotional over my mom painting my room immediately after I move out, I'm no longer a Strong Independent Woman™. How will I fight the patriarchy if I cry over such juvenile things? And while I will forever be an advocate for every woman believing that she is strong and capable, I realized in these last few weeks that that ideology can sometimes go too far, and become negative. Sure, we're capable of anything and everything. But do we have to be? Can it be okay for us to fall, to cry, to be mean and irrational and illogical sometimes? Can we simply have too much on our plates without being told, "See, this is why women CAN'T have it all."

I am a Strong Independent Woman ™. But I am also flawed and fragile and f*cking human, in need of a support system. I need someone to sit next to me while I scream and cry and yell and call people who piss me off terrible names. I need someone to be patient with me when I make a grumpy face after they make me laugh, because I'm in a Bad Mood ™ and I don't want to laugh. That's what I need. And Eli gives that to me. I don't think that makes me less strong, or less independent, or less of a woman. (It probably makes me "more" of that last one.) I'm a little afraid to post this, because I don't want you all to see my ugly side and judge me. But at the same time, I think that's kind of the point of this post. Not for you to judge me, but for me to accept myself enough to share it.