Close followers of my blog posts (hi Mom!) know I've written extensively about how support for stronger gun laws is actually less controversial than the press reports might lead you to believe. And crosstabs suggest something driving the dissension that does exist: a gender gap that transcends party lines. 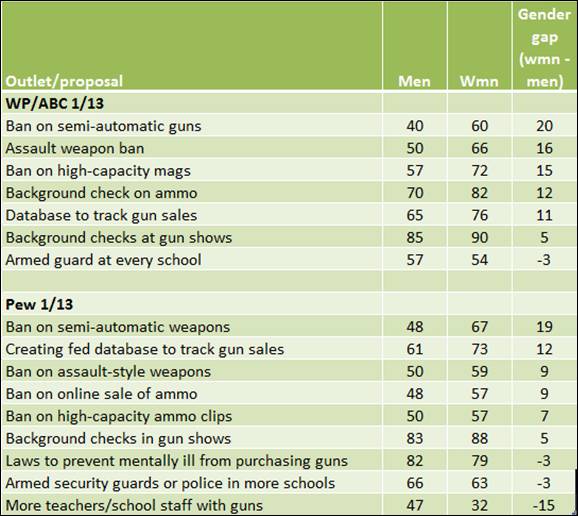 There is also a gender gap in support for specific gun laws up for debate. In the latest Washington Post/ABC poll, women are more likely than men to support a variety of specific gun laws. Every proposal but two has a gender gap of double digits. Pew's poll from around the same time shows a similar result, although men are more supportive of arming teachers or adding armed guards to schools.

Women more likely to be worried about school shootings, and the danger of guns

There is also a clear gender gap in concern about school shootings. The same Washington Post/ABC poll shows nearly two-thirds of women are concerned about a mass shooting in their communities (62 percent), but fewer than half of men (46 percent) have similar concerns. Gallup shows nearly identical results with 60 percent of women feeling it is very or somewhat likely something similar to Newtown could happen in their community, compared to just 43 percent of men.

Women are also far more likely to worry that gun ownership makes them less safe. In the immediate aftermath of Newtown, Pew found a majority of men felt gun ownership does more to "protect people from crime" than "put people's safety at risk" (men: 55 percent, 30 percent). But a plurality of women (43 percent) agreed with the latter. And nearly three-fourths (73 percent) of women said allowing citizens to own assault rifles makes the country "more dangerous" compared to 58 percent of men.

Men may be favorable toward the NRA, but women are not

Further, in the Washington Post/ABC poll a plurality of women (42 percent) feel the NRA has too much influence; fewer men feel the same (34 percent).

This isn't just a post-Newtown phenomenon

The Washington Post/ABC poll reveals women are more likely than men to say Newtown has made them more supportive of stronger gun laws (58 percent among women, 45 percent among men). But this gender gap existed pre-Newtown. Since 1991 Gallup has consistently found a double-digit gender gap in support for "more strict" gun laws. Similarly, Pew data in recent years shows majorities of women prioritize "controlling gun ownership" while majorities of men prioritize "protecting the right of Americans to own a gun." 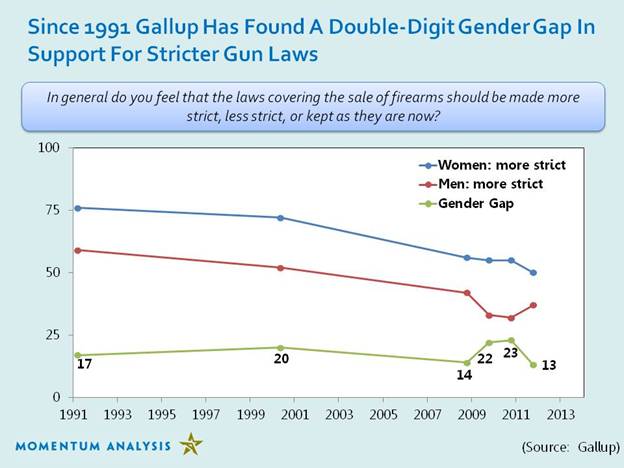 These differences can't be explained solely by a gender gap in party identification. Pew has released extensive tables after recent polls, showing women across party more likely to support "controlling gun ownership." Among independents the gap was almost 20 points in December (though it narrowed in Pew's most recent survey). There's also a large gender gap among whites; a clear majority of white men prioritize gun rights (63 percent), while a majority of white women prioritize "controlling gun ownership" (50 percent). Interestingly, there is little gap between mothers and non-mothers in their views on guns. 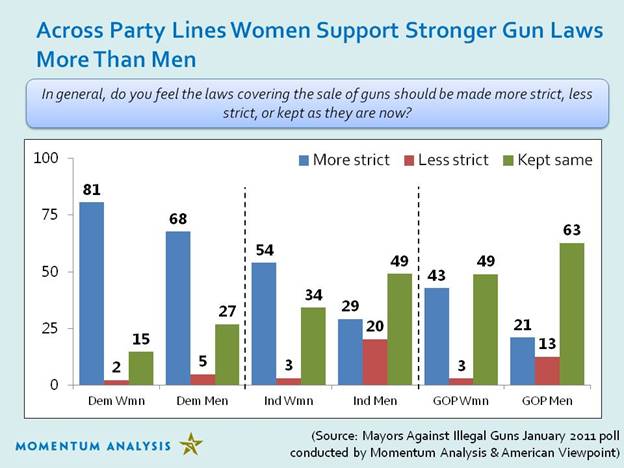 This gender gap could define the debate

With women deciding the election for Obama, a gap on stronger gun laws could be a defining issue in elections to come. Pew notes men are divided as to whether Obama's proposed gun policies are "about right" or "go too far," while a plurality of women (41 percent) feel the policy package is about right. Gallup finds both genders support Obama's policies on guns (men by an 8-point margin, women by a 17-point margin). But the debate on these policies has just begun. Given the consistent, ongoing gender differences on stronger gun laws, this could be yet another cue women voters use to identify candidates who share their values.