Move over, spider silk. Turns out you're not the toughest natural material out there.

Though spider silk has long been considered the world's strongest biological material, new research shows that the tiny teeth of limpets -- small aquatic snail-like creatures with conical shells -- consist of a material known as goethite that's actually much stronger.

"Limpets need high-strength teeth to rasp over rock surfaces and remove algae for feeding when the tide is in," Dr. Asa Barber, a professor at the University of Portsmouth’s School of Engineering in England and leader of the research, said in a written statement. “The fibrous structures found in limpet teeth could be mimicked and used in high-performance engineering applications such as Formula 1 racing cars, the hulls of boats and aircraft structures." 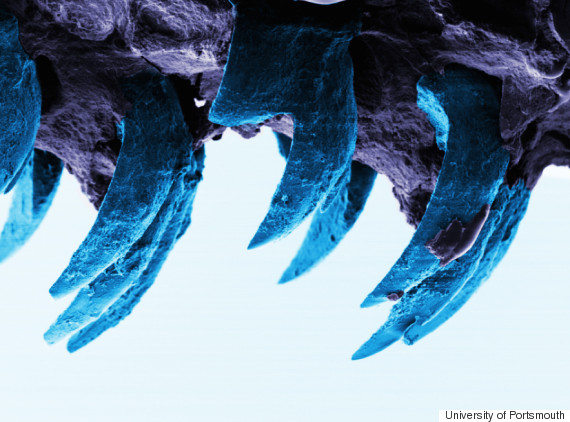 For their study, the researchers examined microscopic pieces of limpet teeth, which were around 100 times thinner than a human hair, using an atomic force microscope. They pulled on the samples to determine the amount of force the material could withstand without breaking.

What did they find? The strength of the limpet tooth material ranged from 3 to 6.5 gigapascals (GPa) -- that's about five times greater than most spider silk, BBC News reported..

Surprisingly, the strength of limpet teeth did not vary according to their size.

"Generally a big structure has lots of flaws and can break more easily than a smaller structure, which has fewer flaws and is stronger. The problem is that most structures have to be fairly big so they’re weaker than we would like. Limpet teeth break this rule as their strength is the same no matter what the size," Barber said in the statement. "Nature is a wonderful source of inspiration for structures that have excellent mechanical properties."

The study was published online Feb. 18, 2015 in the Royal Society journal Interface.