Hitler-centered historical comparisons with the new "strongmen" of the world are dangerous. They are perilous not so much because they tend to miss their target by a wide margin, but rather because they act as a smokescreen. They obscure the very worrying parallels between the great crisis of liberalism of the post-1873 world that lasted at least for three generations and the current crisis of liberalism. It is these parallels that should be the source of grave concern for the future of a liberal world order, as it was the post-1873 crisis of liberalism that was the root cause for the darkest chapters of the history of the last century.

Neither any of the new or aspiring strongmen and women -- be they Donald Trump, Vladimir Putin, Viktor Orban, Recep Tayyip Erdogan or Marine Le Pen -- are reincarnated Hitlers. Yet the fact that we do not have to fear the emergence of a new Auschwitz or Hitler-style world war should be no cause for complacency. The conditions in Europe after 1873 that gave rise to Hitler, Mussolini, Lenin and Stalin look eerily similar to the conditions that have brought the strongmen of today to the fore.

Prior to 1873, liberalism and old-style conservatism had competed for dominance all over Europe and the Western world. Yet for all their differences, the interaction of liberals and conservatives had been of a dialectic nature. Despite all the noise that their struggle had produced, all European countries had moved slowly, often painstakingly so, towards a more liberal order. Furthermore, there had been awareness both within states and between states that polities as well as the international system could only be governed if all players accepted the rules of the game. The pre-1873 world had been full of flaws, to be sure. Yet in comparison to the more than a century that followed, it had been a world that had worked.

The conditions in Europe after 1873 that gave rise to Hitler, Mussolini, Lenin and Stalin look eerily similar to the conditions that have brought the 'strongmen' of today to the fore.

The crash of the Vienna stock market of 1873 heralded a new age, in which the losers, imagined and real, of the ensuing great depression and of industrialization abandoned the promises of liberal democracy and of conservatism alike. They flocked to left-wing and right-wing protest movements instead. By the end of the First World War, the struggle between liberalism, the old order and the new protest movements had metamorphosed to devastating effects into a three-way world war of ideologies between liberal democracy and right-wing and left-wing collectivism.

In recent years, just as a century ago, it has been the losers, imagined and real, of liberalism -- in our case marked by globalization, the move towards a new economy and a liberal world order based around ideas of free trade and pooled sovereignty -- that has given rise to right-wing and left-wing populism.

It is these forces that have fueled the rise of new and aspiring strongmen and women in the Americas, Europe and parts of Asia and Africa. Their rise does not imply that the kind of wars and kind of polities that the world experienced between 1914 and 1945 are awaiting us in front of our doorsteps. Unlike a century ago, we do not live in an age of disintegrating empires and social Darwinism. Nor are we experiencing the transformation of the fundamental organizing principles of the states in which we live akin to the transformation of multi-ethnic dynastic empires into nation states that the world witnessed between the early 19th and mid-20th century.

Yet if we peel away the differences between the world of a century ago and of today from their similarities and focus on fitting historical analogies, the emergence of a new world order comes into sight that, while different from the world of Hitler and Stalin, should worry us all. If we do not manage to stem the flow of the new populism and the rise of new strongmen in today's age of globalization, we are likely to witness a breakdown of the liberal world order that has at least five elements.

The emergence of a new world order, while different from the world of Hitler and Stalin, should worry us all.

Domestically, we will witness the electoral erosion of liberal democracy, as we did in the age of revolutions preceding and following the First World War. This has already happened in several countries in Eastern, Central and Southern Europe. Yet alarming signs abound even in stable, affluent countries such as Germany. For instance, 42.6 percent of voters in the state of Saxony-Anhalt recently cast their votes for right-wing and left-wing populist or radical parties. Anybody who has ever dared publicly to criticize Putin, Erdogan or Hugo Chavez when he was still alive will need no further elaboration about the grave consequences of the rise of illiberal democracy or outright authoritarianism for the fate of liberty and our ability to determine our own lives.

Second, despite the many ills of a liberal economic order, no alternative economic order has produced comparable levels of wealth (and social welfare). A pursuit of illiberal and isolationist economic policies driven by a belief in autarky, rather than of reformed liberal policies, by the new strongmen would likely result in economic collapse, as it did in the past. The ensuing result would be a fanning of further political radicalization, hence triggering a vicious and self-reinforcing cycle of political, social and economic disintegration. It is thus very troubling indeed to see African news outlets making the case for autarky, sometimes even invoking the example of how Hitler's turn to autarky reduced levels of unemployment in Germany.

Third, just as then, we are now experiencing an alarming rise of xenophobia and racism in all countries that have experienced the rise of new strongmen. It is a hallmark of the strongmen of both the past and the present to blame the problems members of their core constituency experience on people not belonging to their own tribe. We do not need images of Auschwitz to foresee that a further rise in populism will thus have dire consequences. 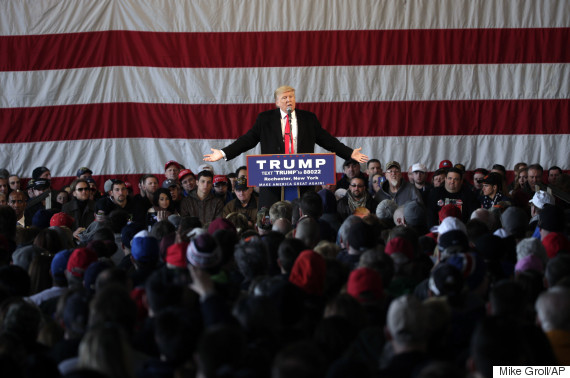 Trump speaks during a rally at JetSmart Aviation Services on April 10 in Rochester, N.Y. (AP/Mike Groll)

Fourth, the rise of aspiring strongmen and of populist movements in Europe makes it well nigh impossible to strengthen common institutions and to coordinate policies at a time at which most of Europe's periphery stands in flames and in which half of Europe is in dire straits itself. Due to ill-designed institutions, Europe had already been in crisis and in urgent need of fundamental reform prior to the rise of the new populism.

Yet just as in the pre-1873 world, there had been, despite all the European Union's problems, a rough agreement about the rules of the games and the common purpose of the EU. With the emergence of illiberal democracy in the Visegrad states, the rise of economic radicalism in parts of Southern Europe, the flourishing of isolationist nationalism in Western and Northern Europe, a revival of a belief in autarky in parts of Europe, the resurgence of parochialism on the British Isles and federalists in defensive rather than in innovative reformist mode, there is no longer any agreement over the rules of the game, let alone about the future of Europe.

Fifth, and most worrying of all, the rise of populism and of new strongmen fatally undermines functioning global governance. Trump, Putin and Erdogan share a contempt for international organizations, formalized rules and formalized systems of collective security. Their rejection of common liberal institutions and formalized rules would not be quite as grave if they at least shared common informal rules.

We should fear the return of the world of Barbary piracy after the decline of the Ottoman Empire or of Europe after the fall of Rome.

Yet the contempt displayed by the new strongmen of a G20-style system of global governance rivals that to their rejection of the UN and NATO. Putin, Erdogan and many others have been driven by short-termism in their pursuit of political goals. They have engineered conflicts that bring them short-term political advantages that they have been unable to consolidate and control. In doing so, they have opened Pandora's box. Furthermore, they have been unwilling to use a formal or informal system of global governance to contain the forces flowing from Pandora's box.

The EU, meanwhile, has been in a state of near foreign and security policy paralysis, while the U.S. has allowed red lines to be drawn and crossed without consequences. The result of all this has been a mushrooming of ungoverned spaces. It is thus not a renaissance of Hitler's world order that we have to fear. Rather it is a return of the world of Barbary piracy in the wake of the decline of the Ottoman Empire or of Europe after the fall of Rome.

Whether or not the rise of populism and the emergence of new strongmen will succeed in destroying our liberal world order will depend on all of us. It will depend on our ability to reform liberalism and to innovate our systems of domestic and global governance rather than to limit ourselves to pouring contempt over the supporters of populist movements. By timidly defending the status quo, we will be fighting a losing battle, not least since many criticisms of the liberal world order by left-wing and right-wing populists are well on target, even if their proposed alternative remedies are a recipe for disaster.

1 / 11
Juan Escalante, campaign manager for the immigration reform group America's Voice, carries a box he claims contains over half a million petition signatures demanding that NBC revoke the invitation for Republican presidential candidate Donald Trump to be a guest-host on this weekend's "Saturday Night Live," into NBC Studios where the show is taped and broadcast, Wednesday, Nov. 4, 2015 in New York.
Kathy Willens/AP