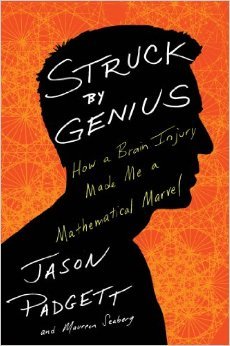 Jason Padgett took the stage that night at the Tacoma karaoke bar eleven years ago, reached for the microphone with his muscular arm and started to strut with his best cowboy gait. The crowd was silenced as he belted out a Jon Bon Jovi song from the modern Western Young Guns II:

Shot down in a blaze of glory
Take me now, but know the truth

He was an everyman -- a futon salesman, college dropout and self-described "party dude" -- and he was out for yet another night on the town. He packed up his things when the performance was over and motioned for his friends to do the same.

They exited the bar.

Just ten steps outside, he was violently mugged by two fellow bar patrons while his friends looked on. Punched and kicked in the head, he suffered a brain injury. Only, unlike most of the millions of people suffering with Traumatic Brain Injury (TBI), a serious public health problem in the United States, he acquired new gifts with the blows. He now had savant syndrome and synesthesia, though the first doctors who treated him called it a profound concussion, nothing more. This young gun from the Pacific Northwest by way of Alaska in fact now had more in common with Archimedes and Mandelbrot and Einstein.

And he may be living proof that dormant genius potentials exist in us all.

Struck by Genius: How a Brain Injury Made Me a Mathematical Marvel, the book I co-authored with Jason about his stunning transformation, launches tomorrow by Houghton Mifflin Harcourt. We hope it's the beginning of an animated, international conversation about the potential which may be latent in all our minds.

Jason never made it past pre-algebra before, but after the mugging he suddenly understood the theories behind complex math and physics. He was just never exposed to the things he now knew -- his abilities were not old memories of prior teachings suddenly freed up. There were no such memories. He was arriving independently at great truths. He saw geometric forms everywhere from the synesthesia he also acquired from his injuries and meticulously drew the patterns. He never was able to sketch anything well before, but now crystalline grids flew out of his pencil lead and helped him solve math problems.

Jason has since submitted to several brain scans when I requested that Dr. Berit Brogaard, a fellow synesthete and conference colleague, study him. They confirmed his gifts. 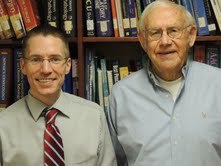 The "Dean of Savants," Darold Treffert, above with Jason today, who treated Kim Peek (the inspiration for the savant character in the movie Rain Man) also examined Jason during a trip we made to his office in Wisconsin and contends that nothing was added or created when he was injured. Rather innate, dormant skills he calls "factory-installed software" or "genetic memory" were released.

And Dr. Allan Snyder told me he considers Jason living proof of his own similar theories of dormant potentials. Dr. Snyder has invented a "Creativity Cap" which induces savant-like states in ordinary people. Put on the cap, a trans cranial magnetic stimulator, and suddenly go from drawing stick figures to beautifully rendered drawings. Take it off, and 45 minutes later, you're "normal" again.

Jason's case is one for the ages. Doctors say that our minds are usually "under the tyranny" of the left hemisphere of the brain and don't perform at the levels seen when brains are sometimes diseased or injured, like Jason's. Could we one day unlock the secrets of all our inner geniuses?

The co-chair of President Barack Obama's new BRAIN Initiative (Brain Research Through Advancing Innovative Neurotechnologies) Dr. William Newsome of Stanford University told me that Jason's case may be crucial in the next generation of research. The program is a new presidential focus to advance understanding of the human brain through development and application of new technologies. One hundred million dollars was dedicated to seed the program last Spring and an expected $200 million will be in next year's budget.

"Jason's case -- and other cases like his, in which individuals develop new and specialized cognitive capabilities after brain injury -- will be important sources of insight for us as we move forward with the BRAIN initiative," said Dr. Newsome. "It has long been the case that individuals who experience dramatic change in their conscious experience or behavior after an injury have taught us new things about the way the brain works." He explained that in the 19th century, we learned about the role of the frontal cortex in cognitive control, planning and emotional regulation from a man named Phineas Gage, who suffered a traumatic brain injury when an iron rod was driven through his head in a construction accident.

"In the latter half of the 20th century, our understanding about the way human memory works was radically changed by a man who had experimental surgery to relieve epilepsy, which left him unable to form new short-term memories while his pre-surgery long-term memories remained intact."

And he believes that we will continue to learn more about how the brain works from individuals who are recovering from brain injury today.

"Modern medicine has given us incredible opportunities to aid the recovery of people who have suffered traumatic injuries, and new technologies in neuroscience will help us visualize and understand what has really happened in their brains. Extraordinary clinical cases like Jason's, especially when examined using some of these new technologies, could give us insights into the brain that we would otherwise never have access to."

A blaze of glory, indeed.