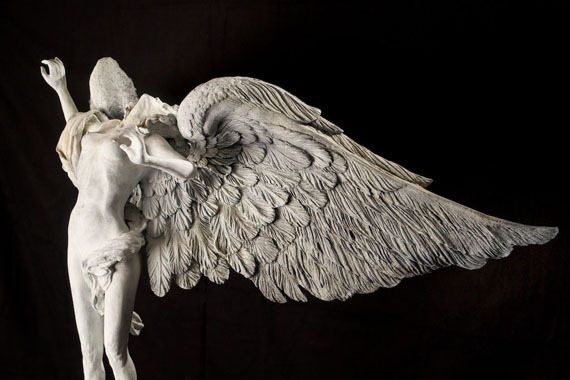 Stuart Kusher is an irreverent classicist, a polydextrous visual communicator, a post-media mythologist and consummate rule-breaker for whom content, concept, technique, process and meaning are bound together in a singular intuitive imperative -- telling the many varied stories of humanity, beginning with his own.

A lifelong artist by temperament and activity, for Kusher this storytelling impulse has generated an impressively eclectic array of manifestations over the years. From early inventiveness that prompted him to create, arte povera style, intricate sculptures carved into kneaded erasers, on school time; to his early mentorships by seminal figures in LA's bohemian avant-garde from artists like Lorser Feitelson and Paul Zorthian, to Artforum critic Fidel Danieli; through decades of success in the interrelated spheres of advertising, music and film -- all culminating in the most meaningful, personal, monumental work of his life so far, a suite of bronze sculptures of extraordinary power, innovation, complexity and soulful, earthy majesty in which figures and symbols are invoked through the artist's imagination to become profound avatars for aspects of man's existence. 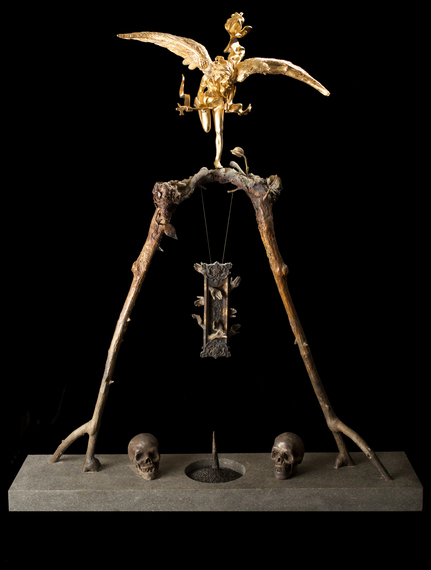 Kusher's technical process is an epic undertaking of complex interactions between analog and mechanical, natural and chemical, temporal and atmospheric elements. Some of his larger works such as the striking monument to passionate, pensive beauty that is Contessa may take two years from inception to installation. But the main thing is, since Kusher always starts in clay before ultimately finishing in bronze and/or stainless steel, the original sparks of creative imagination present a vitality, verve and hand-wrought immediacy that endure right through to the finished works -- which in their heavy metal heft and iridescent, chromatically saturated patinas have both a timeless gravitas and a 21st-century swagger. 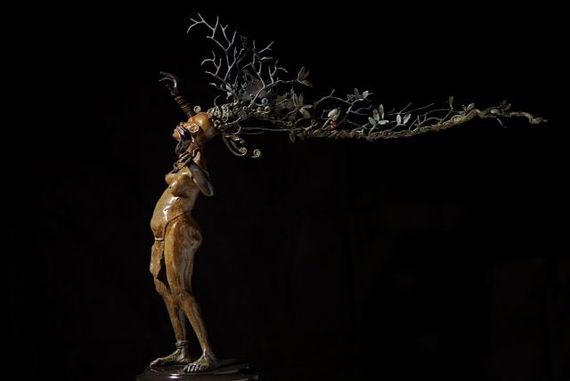 As Kusher sets out on each new experimental studio journey, it's as though the clay communicates directly with his muse before addressing him with its desires. He finds himself asking what each new sculpture needs to tell its nascent story in the most effective, impactful, memorable way. There's no plan per se when he starts, yet the metaphorical schemes which emerge are fraught with such cultural significance and narrative layers that they fairly beg to be deciphered and decoded. At times there is even an undercurrent of religiosity, or worshipfulness -- such is the power of the sculptures' radiant souls and eccentric accoutrements. In works like The Gatekeeper, The Scribe and The Messenger, Kusher's use of ritualistic postures and allegory-rich symbols like beating wings, plucked feathers, locks and keys, bones, wood pyres, human skulls and masks resonate in depths of our collective unconscious. 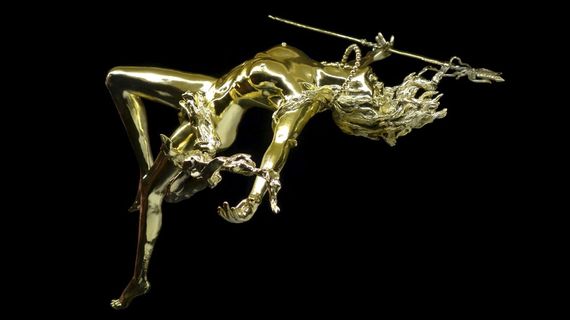 But just as there is no single source for his poetic characters and storylines, there is no single spiritual doctrine at issue. Greco-Roman, Judeo-Christian, Pagan and First Nation, Deist and Tribal, Jungian and Surrealistic -- all of these rivers flow into Kusher's stylistic and iconographic reservoir, where they intermix and transform into fresh new wholes. Works like Broadway Madame, Mohawk Mafia, Afrinesta and Patron Saint of San Onofre evolved from observations on the secular world, the dynamics of the demimonde, the inverted power structures of gender relations and the hyperactive illusionistic theatricality that defines much of human interaction. With exaggerated features, elaborate headdresses, jaunty stances, knowing glances and political edge creeping in through the titles, much of Kusher's work seems involved not in reviving the old gods but in giving form to our new ones. 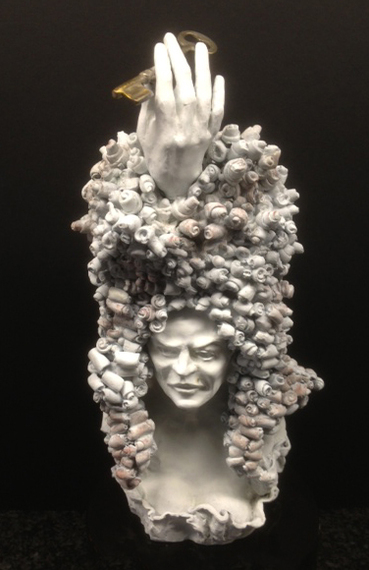 Contessa, Kusher's most operatic work to date, toes the line between portrait and idol with exceptional nuance. Her face is an emotional portrait rather than an image of likeness. Kusher works from real people but not specific models or photographs. An ardent observer and keen student of detail, by the time he enters the studio he's more than prepared to work directly from his imagination; and the interpretation of his own subject matter only comes to him later as he works down into the clay. His is a finger-based thought process, a tactile conceptualism that began fifty years ago with his ad hoc eraser sculptures and evolved through decades of paintings, assemblages, designs, performances and sculptural feats of engineering and labor-intensive treatments -- yet still yields results as intimate as the thumbprints visible in the serpentine locks of Contessa's arboreal tresses. 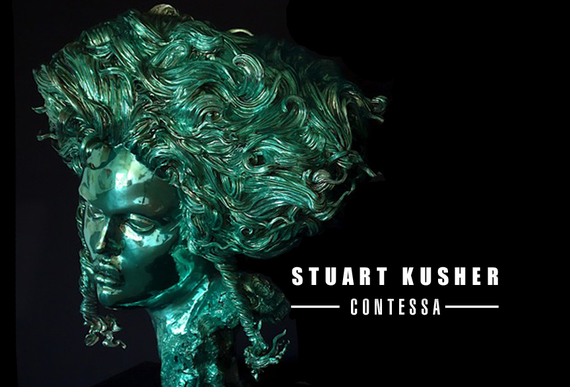 They say no man is an island -- at least not in the stream of art history -- and Kusher is nothing if not a voracious aficionado of visual culture. But neither is he interested in appropriating or recreating what has come before. It's more that as he proceeds with a bold curiosity to observe and express, he forges for himself new pathways toward the same archetypes that inspired the artists and artisans of old. Thus the formal qualities that hearken to conventions of both art history and anthropology in his work are, if not quite coincidental, then certainly independently devised. Inspired by the classics but excited by the outlaws, Kusher carries on telling extraordinary stories that belong only to himself -- yet also belong to each and every one of us.