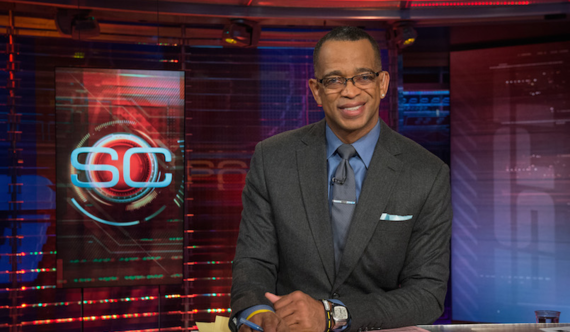 On Sunday, January 4th, 2015, after seven years of fighting, ESPN's news anchor Stuart Scott succumbed to the ugly beast that is cancer. The disease may have killed Scott, but he was clearly the victor in his battle, never letting it take his life from him while he was living. Scott is described by those who loved him as a "friend, father, charmer, worker, warrior and champion." What one co-worker called Scott's "magic" another summed up as his "Stuartness." It was Scott's "Stuartness" that endeared him to millions of sports fans -- and the public -- with his signature sayings like "Boo-yow!" (or Booyah!) and "as cool as the other side of the pillow."

In his 2014 ESPY Perseverance Award acceptance speech Scott said, "When you die, that does not mean that you lose to cancer. You beat cancer by how you live, why you live, and the manner in which you live."

As a fellow cancer patient, Scott's words resonate. Cancer robbed me of my hair, my nails, my energy and so much more, but there was little to be done to stop that. The most important thing for me to cling to throughout treatment, more than my job or my physical being, was my spirit. Physical misery never brought me to my lowest points; those came when I lost my sense of self.

When I held tight to myself, I won. I faked many moments of strength, but eventually they became genuine. Scott was a master at that. Cancer took so much from him but it never took his "Stuart-ness." When Scott was ill, coworkers saw him struggle off-air, but the second the camera rolled, he was the Stuart Scott we knew and loved. If nothing but your "you" survives, then cancer cannot beat you.

Throughout treatment, Scott continued his work on-air while raising two beautiful daughters. He was known for his personal and professional courage -- and refusing to be anyone but himself. Recently, veteran sports and political commentator Keith Olbermann shared his admiration for his former ESPN colleague's professional bravery. He recalled the time Scott was summoned into an ESPN exec's office and told he was "using language that most of the audience didn't understand, and it had to stop." In other words, he was being critiqued for what this network exec deemed as inappropriate African American slang.

Scott was pissed. In response he wrote an ESPN news column about how honored he was that the network let him freely use certain phrases that were "evocations of his cultural and racial heritage." He traced the origins of his signature catchphrases to the street, his church and even plantations. After that, no one was going to pressure Scott to change his style. "It was nothing less than perfect," Olbermann recalls.

The humor and now-popular phrases Scott brought to ESPN changed the way viewers watched sports, and ingrained Scott into American culture. His strong presence this past decade as he continued to fight cancer also reminded us of the sanctity of life. It is a fleeting gift, and how we live it and who we share it with are what make it precious.

May we all learn from Stuart Scott's tenacity, heart and spirit and honor him through the ways we live our own lives.