Some of you may know that I attended a blogging conference this past summer. It was BlogU 14, hosted at the beautiful campus of Notre Dame of Maryland University in Baltimore. I had been tweeting and Facebooking about it for months in preparation, in an attempt to win back my registration costs (which I totally did!) Aside from the chance to win some cash, I was truly excited about going to this conference.

It was my first blogging conference and there were so many hilarious ladies (and one awesome dude) that were there, it was like a veritable buffet of laughs and coolness. But the REALLY exciting thing was the NickMom Prom. NickMom sponsored the big dance that Saturday night and we were all doing the retro thing. What could be more fun than that, right?

But there is one dark side to this whole thing. Several days before the conference, I almost died. Yes, it's true. Because of my love for this conference, I nearly lost my life. Let me explain.

I had asked my friend Madge to keep an eye out for "retro-gowns" (think: big, poofy, '80s), so when she texted me one afternoon telling me that she had found the perfect dress for me at Goodwill, I was all over it! She had them put the dress aside for me AND talked them down to just $20! I prayed this dress would fit, because I hate shopping for "retro-gowns" (okay, I've NEVER shopped for "retro-gowns") and it would just be so much easier to have someone else find it for me.

After work, I headed to Goodwill, grabbed the dress and went into the dressing room. I took the monstrosity off the hangar and lifted it over my head. I then struggled with the zipper until it was almost all the way up. SUCCESS! It (almost) fit! I was so glad that it fit that I took this pic while in the Goodwill dressing room: 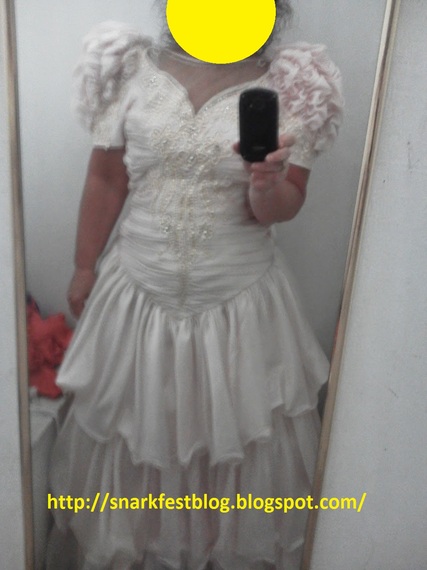 It was floor-length, and so hot that I completely sweat my ass off just putting it on, but it (almost) fit and I didn't have to go out looking for another dress, so I made the decision to buy it. Then I tried to get out of it. And that's when it happened. I came close to dying right then and there in the Goodwill dressing room. Seriously. I started sweating harder, my heart began to race and I had 911 on standby. When I was unzipping the dress, the gigantic, almost blanket-sized tag got caught in the zipper. 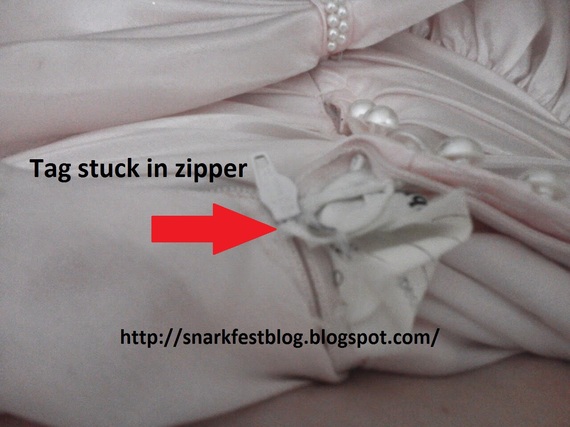 As you can see, I was in a bit of a pickle. I was wearing the dress, the zipper was on the opposite side of my body from my eyes and my hands so I was working blindly and pretty much having a heart attack. I said to myself: "Self, the first thing you're gonna do if you ever get out of this dress is CUT OFF THAT EFFING TAG!" I convinced myself that it would be better to die alone in the dressing room than to die of embarrassment by having to ask someone at Goodwill to come into my dressing room and help get me out of this dress-of-death. So I went to my happy place (where there's wine and chocolate), slowed my breathing and concentrated on not dying. I took my arms out of the top of the dress and was able to turn the dress around just enough that I could see the tag in the zipper. I swear I could hear the tag laughing at me but that may have just been my imagination.

Eventually, I freed the tag from the zipper and cursed at it strongly before extricating myself from the dress without the use of the jaws of life. It was touch and go for awhile, and ultimately, I got myself a pretty cool dress for a really cheap price.

This piece was originally posted on my blog, Snarkfest.