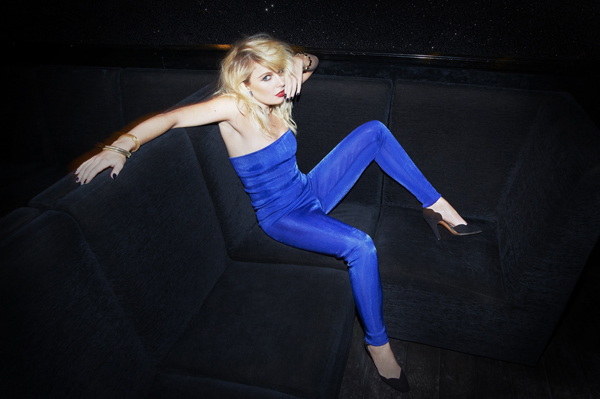 If you want to humanize an interview subject, catch them while they're at the airport. Little Boots, the 28-year-old British dance queen whose 2009 launchpad "Stuck on Repeat" fulfilled its promise better than any meta-dance track this side of "Can't Get You Out of My Head," melts away to Victoria Hesketh, a very sweet and enthusiastic young woman who is doing her damnedest to talk up a fine new record while securing a place on an outgoing flight.

That record is Nocturnes, out May 7 on Hesketh's own Repeat Records imprint. The melancholy tour through dance history was written during a period of globe-hopping DJ gigs and produced by fallen DFA honcho Tim Goldsworthy and deck rats both gay (Andy Butler of Hercules and Love Affair) and straight (James Ford of Simian Mobile Disco).

What at first reads as a seamless ode to the twin sounds of Chicago House and Giorgio Moroder disco reveals its tears-on-dance-floor emotional palette through repeat listenings. It takes a lot of work to make a record this dark look so easy. Tracks like "Motorway," "Shake" and "Strangers" have you moving long before you realize that Hesketh isn't waving at the past but drowning in it.

Nocturnes' mood more than lives up to its title and heralds a promising direction for a newly grounded young artist. Though I really hope Little Boots made her flight, I'd love to hear the Stuck in the Security Line EP that could result if she didn't.

(This interview was conducted via phone on April 26. Little Boots is currently on a truncated North American Tour that regrettably does not include D.C. Next time, Victoria. Next time.)

Zack Rosen: Nocturnes is a very different album from its predecessor, Hands. The mood is so anachronistic as to almost be melancholy. What was different about the creation of this one?

Victoria Hesketh: Everything was different from the first album. This time it was a long, drawn-out process, more than I would've liked, though ultimately I was able to call all the shots and get complete creative control. That's been incredible. I wish I could've had that my first time around, to really do what I wanted and to follow my own vision and my own instincts.

Rosen: How did you instincts guide you to such a sad, emotional record? It's definitely not just a series of dancefloor tracks.

Hesketh: I've been DJing a lot; I wanted to feed that into the album. I didn't want it to be a club album; I wanted it have personality and tell stories. That's what a lot of modern dance music and EDM is missing: personality. It's very difficult to tell one song from another, artist-wise. Most that come on, you can't name who it's by. I make dance pop outside of that template and keep a lot of personality and emotion in. It would be difficult for me to write songs without putting myself in there, or some kind of feelings.

Rosen: Were you nervous about a track like "Broken Record," which is so thematically similar to "Stuck on Repeat"?

Rosen: Tell me about track 7, "Crescendo." That's my favorite. It's a great song on its own, but I loved that it also served as the crescendo of the record.

Hesketh: That song is about having an argument. Something starts as a very small, offhand comment; the other person retaliates; it's completely out of control; you're caught in this thing. It's something that happens when you get two stubborn or strong-minded people in a relationship. I'm attracted to other strong-minded people.

Rosen: What about the title and the way it fits the song's role on the record?

Hesketh: I love the title. I trained classical as a kid. I had the word knocking around for a while; I wanted to use it. It's nice to do a slower song that's also anthemic, a really building song.

Rosen: Of all possible collaborators you could've worked with after Hands, how'd you settle on Tim Goldsworthy and Andy Butler?

Hesketh: I did the song "Shake" with James Ford from Simian Mobile Disco, and that was the first one that really felt like it struck the right chord. James was busy [after that], so how could I find someone from the dance world to marry with my popness? Again, I always think the best collaborations come from organic things. Andy and I got chatting and hooked up in London. Working with Andy made me think of Tim, and it turned out my manager knew him. I was expecting Tim to not be that into it. He's the guy who started DFA, but he just loves great pop songs. Underneath it all, it's this really amazing depth of knowledge in terms of sound and dance music. I was really, really lucky. Pushing me out of my comfort zone, that's what's going to make this record really unique. Me pushing Tim out of his comfort zone into the pop world, and him pushing me out of mine into the experimental dance world.

Rosen: How much of your personality is represented in production? Are you a darker person than you were for Hands?

Hesketh: I think I've grown up a lot. I'm a lot less naïve. I definitely am not afraid to make decisions now. I don't worry about pleasing people or what's expected of me, fitting in this box or that box. I've tried to take risks, songs that are longer than conventional pop songs, songs that are a lot more experimental than straight-up pop songs. Hopefully there's the writing and the structure that holds it together as we really try things out in the production.

Rosen: Of all the eras you evoke in your record, which would you most like to live in?