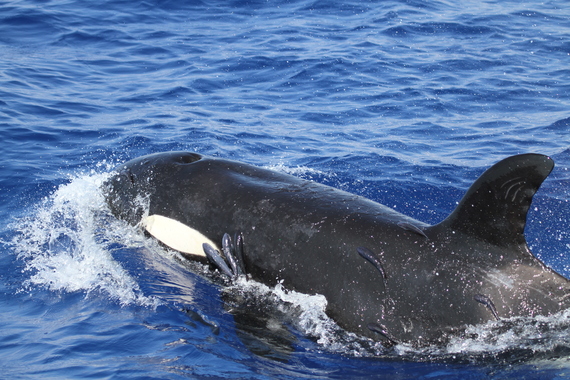 They look creepy and slimy enough, as though they are sucking the blood of their host, but remoras are not giant leeches - it turns out that while not entirely benign, remoras do little harm to their hosts in normal circumstances.

They don't even hang on with their mouths; instead one of the fins on top has developed into a gripping surface that is used to clamp onto a passing whale or dolphin. When viewed from above, the gripping disk looks like the sole of a running shoe, which the fish controls with the aid of tiny barbs that help hook to the skin. Some species can reach the length of over thirty inches.(Wikipedia). 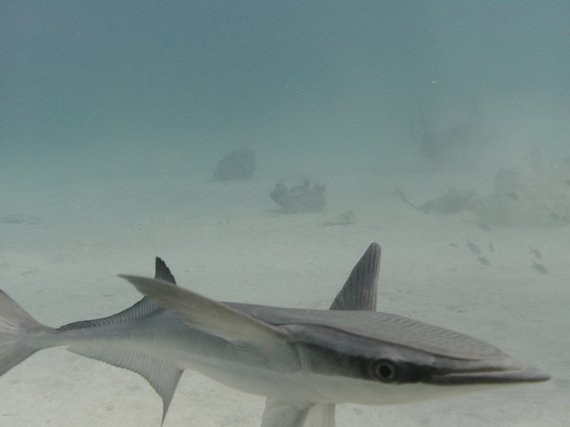 (Photo by Phil Colarusso, U.S. EPA Government photo free use). When attached to a whale's back, the remora travels upside down

Whale remoras (there are eight species of suckerfish, only one or two are found on whales and dolphins) have a fascinating and complex lifestyle, about which much remains a mystery. Little is known for certain about the early life stages - where the eggs are dispersed, or how the juveniles survive and find hosts although it is speculated that early life stages may live in the baleen plates of some whales until they are big enough to attach. 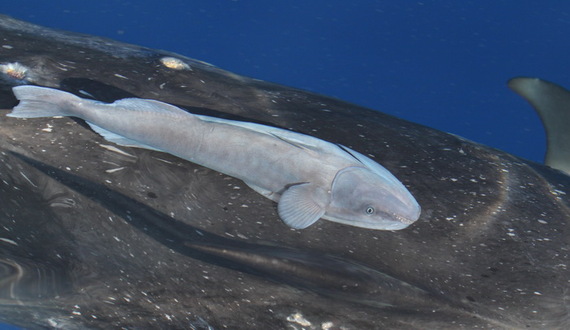 Researchers have found that while the remoras jump off their hosts to feed, at least in some cases they remain with the same individual host where they potentially find mates, even in a tightly schooled species such as spinner dolphins where moving from host to host would be relatively easy.

Researcher Annie Douglas (Cascadia Research Collective) studied remoras on blue whales and reports that the presence of remoras in her study was "significantly dependent on region, year and distance from shore." She points out that studying the fish has the potential to give us information on the movements of the whales, and also since the remoras are limited by temperature, their distribution may serve as indicators of ocean warming.

We found that presence of remoras has been increasing since 1985, this may be an indication of the general warming of the eastern Pacific Ocean. Sea surface temperature change off California waters has been linked to distribution changes of various species. Sooty shearwaters (Puffinus griseus) experienced a 90% decline between 1987 and 1994.

The decline was linked with the increasingly warm waters off of California and distribution shift of shearwater prey (Veit, 1997). Remoras could be an indicator species of changing ocean temperatures and their association with blue whales makes them readily available to annual studies. Remoras were prevalent in offshore versus coastal waters possible reflecting the natural temperature difference between (colder) coastal and (warmer) offshore water caused by the North Pacific gyre and coastal upwelling. 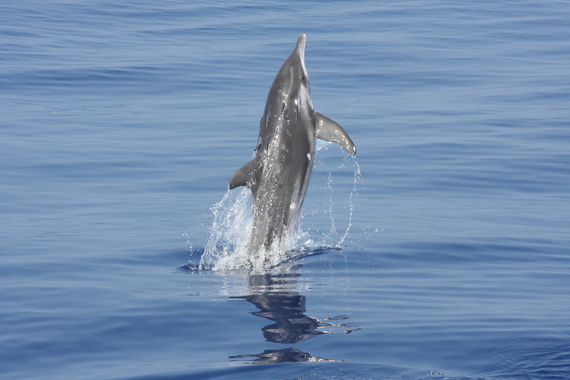 According to this paper "The association of the whalesuckers with a middle-sized, fast and social cetacean likely provide this remora with ride, food, increased opportunity for reproduction and mating place, and perhaps protection from fast predators such as sharks, tuna, and larger dolphins."

The remoras attached to the orcas pictured above are now cruising east at a much faster clip than they could have managed on their own. In the last couple of weeks, the tagged killer whales, presumably with their hitchhiking remoras aboard, have moved east into the open ocean. 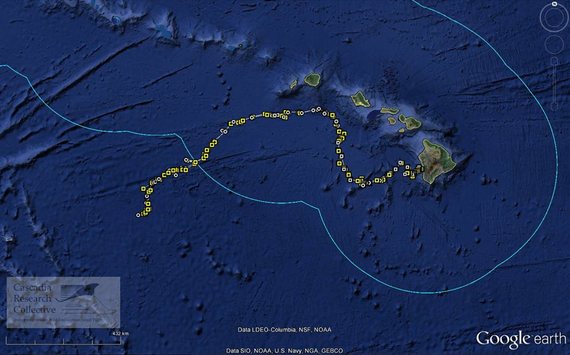 The benefits to the fish are clear, but why do the whales put up with them? While researchers have noted that the remoras may help clear external parasites, clean wounds, or remove dead skin, it is hard to see how it is worth it to dolphins and small whales to put up with the irritation and potential drag of the fish.

Why the whales tolerate the remoras is an as yet unanswered question - it may be that there are as yet unknown benefits, and in some cases the whales seem able to move the fish from vulnerable places such as the blowhole or eyes to other areas such as the stomach.

Robin Baird, also of Cascadia Research Collective speculated that adult orcas may have a way to remove the fish, including the possibility of removing them from each other, or by leaping out of the water:

In terms of getting rid of remoras, it was interesting that both of the adult killer whales we saw were largely remora-free, and both of the juveniles had many remoras, which probably reflects the adults ability to get rid of them. That is also something commonly the case with spotted and spinner dolphins, we are more likely to see remoras on juveniles, and larger ones on juveniles, than on adults.

A Pseudorca (false killer whale) once one whale removed a suction-cup attached tag from another Pseudorca, and I've always thought that was why we rarely see big remoras on Pseudorca. [They may just remove them from each other]

If you are wondering if these fascinating fish stick to people, they at least try...