As someone who never dreamed that she could be both an athlete and "out" as LGBT, this year's National Collegiate Athletic Association (NCAA) Equity and Inclusion Forum has had a special significance for me. It hit me immediately after I spoke to the audience about my story, a story that years ago, I could not have imagined telling to the NCAA.

In high school, when I came out as bisexual, it seemed impossible to think that I could be a successful athlete and "out" about my sexual orientation. There were simply no role models for young athletes like myself with dreams of becoming pro athletes. Not only were there no role models, but no one was talking about issues related to being L, G, B, or T on one's sports team.

As part of the panel "Out LGBT Student-Athletes and Coaches: Coming to a Campus Near You," I had the privilege of speaking to an audience of dedicated coaches, administrators, and fellow athlete-activists about my experience as a Division I, LGBT athlete at the University of Pennsylvania. Our panel was moderated by the incredible Pat Griffin, a LGBT sports pioneer and GLSEN Sports Project director, which promotes LGBT education for K-12 students.

Our panel also included Sherri Murrell, who is the only out lesbian Division 1 basketball coach in the NCAA; Murrell was also the 2010-11 Big Sky Conference Coach of the Year. The fourth member was the Athletic Director at Bowdoin University, Jeff Ward, who, as an ally and advocate, has helped to dramatically change campus culture for the better. Campus Pride Climate index recently rated Bowdoin as one of the "Top 10 LGBT Friendly" athletics programs in the nation. 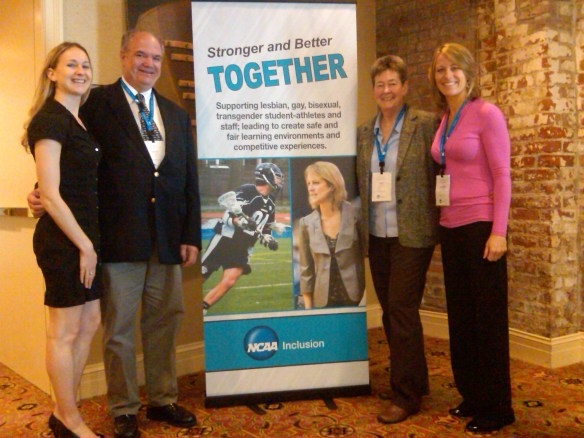 During the question-and-answer period, one audience member stated that she found it hard to believe that Sherri was the only out Division 1 Women's basketball coach. In 2012, I find this hard to believe as well, since statistically, the LGBT community represents at least 10 percent of our society. Now is the time in history when we need people who are LGBTQ athletes to tell their stories to their teams.

Although I have shared my story informally many times, this was the first time that such a large group of athletic coaches, administrators, and staff had asked to hear what I had to say about my experience as an LGBT athlete. As the only person "out" in my high school graduating class of 425 and as the only "out" person on either my college's men's and women's track teams of over 100 athletes, I had become used to being the "only LGBT person" wherever I went.

The feeling I had in high school that I was the "only one" was a lonely and emotionally draining experience, and it wasn't something I wanted to feel forever. Being alone, in fact, is quite the opposite of what it means to be a part of a team. Some of my favorite memories have been winning high school state championships and setting collegiate school records, not in individual events, but rather as a member of a relay team.

I was reminded of the power of sharing our stories as I listened to the other activists, who are experts on gender, race, disability and international rights and also presented at the Forum. One female student-athlete at Tulane shared how difficult and alone she felt being an international student and trying to adjust to U.S. culture and language barriers. Her feeling of loneliness resonated deeply with my own feelings of being the "only one" who was LGBT on my high school and college teams.

Another common theme among presenters was that "our stories are the exception, not the norm." For instance, two disability activists and coaches described the amazing wheelchair basketball program at the University of Illinois, but most student-athletes with disabilities aren't fortunate enough to have programs like this at their universities. This reminded me of the unique experience I had with my college activism through a group called PATH (Penn Athletes and Allies Tackling Heterosexism and Homophobia). Most schools do not have an LGBTQA group for their athletes and many athletes across the country are struggling to find support. Although what is happening at University of Illinois or at Penn is not the norm for most colleges, our stories can serve as a models for schools who want to have more inclusive athletic programs.

Learning to be more inclusive and respectful is a life-long process. The only way we can truly celebrate differences is to understand the beautiful complexity of other fellow human beings. When we celebrate diversity rather than ignore, criticize, or fear it, athletic teams will flourish in ways we can only imagine.

I have faith that sports and athletics can and will lead the way in the movement for social change and equality. Title IX, for instance, has opened up doors and opportunities that women never had 40 years ago. The greater visibility of people of color as athletic stars has helped shift cultural attitudes through inclusion of all races in sports. I believe that athletics can continue to help shift attitudes within other realms of difference, such as among LGBT, international, and disabled student-athletes.

I left feeling humbled, enlightened, and eager to start spreading the knowledge I have gained over the past three days. The stories told by activists representing various other underrepresented groups resonated with my experience as an LGBT athlete. Our common dream for greater inclusion in athletics reminded me that we are much more alike than we are dissimilar. We all want to be loved and celebrated for who we are, yet we also want to be included in group activities and recognized for the contribution we bring to the group. We, as humans, yearn for community and to be "part of a team."

Mostly, I am hopeful for how NCAA athletes and allies can take a stand for LGBT inclusion in sports and provide today's grade school children with role models. We all have the right to achieve our dreams, be included on the team, and be celebrated for exactly who we are as individuals.

For more information about Our stories, Our Mission, and OUR GROUP athletes, please visit www.ourgroupathletes.com