We were greatly inspired by the students and youth we met last month at the 2015 NCLR Annual Conference. Their stories and accomplishments are a testament to the hard work and perseverance that characterize Latino communities across the country. 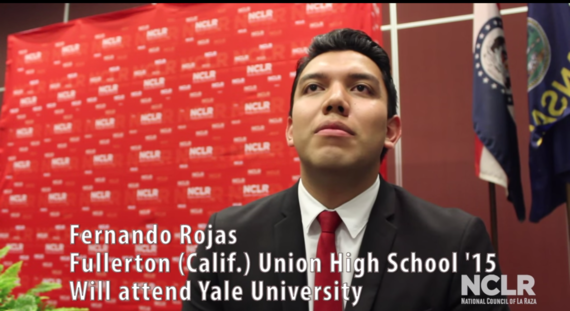 One of the young future leaders we met is Fernando Rojas, 2015 graduate and co-valedictorian at Fullerton Union High School in California. He recently joined a select group by being accepted to all eight Ivy League universities and decided to attend Yale. But it is his sincere feelings on the power of his generation to make change that show he has even greater goals ahead.

Fernando, the youngest of four children, saw his brothers graduate from high school and undertake postsecondary education. But he is the first to leave home for college. His parents, Raúl and María, immigrated from Jalisco, Mexico, and were not able to complete secondary education, so Fernando's accomplishment "was a success for all of us, not just for me," he says. "It was for my family--my aunts, uncles, cousins who helped me along the way. Recognizing their struggles was the motivation I needed."

The importance of familia is something Fernando finds to be an important shared experience among Latinos. "There are ups and downs, struggles, and hardships, but you have that support at home--and you have the support of a larger community," he says.

Even though Yale is a long way from Fullerton, it is the place where he felt most at home. "I knew that I was going to be leaving my family in Southern California, and I found that at Yale," where he says he got the sense of being part of "an inclusive family."

Rojas is interested in pursuing Latin American studies at Yale and hopes to combine that with further studies in international law. He believes students of his generation who are applying to or attending college need to take on the "challenge" to change negative perceptions about immigrants in this country.

"We're people that want to get educated. Our parents didn't have that opportunity but they did want us to have that opportunity," he says. "Taking those resources and being able to make the best of it is one of the best ways to show that we are a strong community, we have a voice, and we have important things to say."