College undergrads who take on a lot of student loan debt are less likely to thrive in several key areas after graduation, according to a Gallup analysis released Thursday.

That one of those areas is their financial well-being seems obvious, but Gallup's report suggests that major student debt tends to burden the graduates' lives well beyond their wallets.

The pollster looked at data from a project with Purdue University and the Lumina Foundation that surveyed Americans who graduated from college between 1990 and 2014. They were asked to evaluate multiple statements about their lives on a five-point scale, ranging from "strongly disagree" to "strongly agree."

Those results were then analyzed to see if the graduates were "thriving," "struggling" or "suffering" in each of five areas of well-being taken from the ongoing Gallup-Healthways Well-Being Index. The index currently examines purpose, defined as "liking what you do each day and being motivated to achieve your goals"; social, defined as "having supportive relationships and love in your life"; financial, defined as "managing your economic life to reduce stress and increase security"; community, defined as "liking where you live, feeling safe and having pride in your community"; and physical, defined as "having good health and enough energy to get things done daily."

Graduates who had taken on debt of more than $50,000 were more likely than their less-burdened counterparts to be struggling or suffering in four areas: purpose, financial, community and physical. The only area where they were not dragged down was their social well-being. 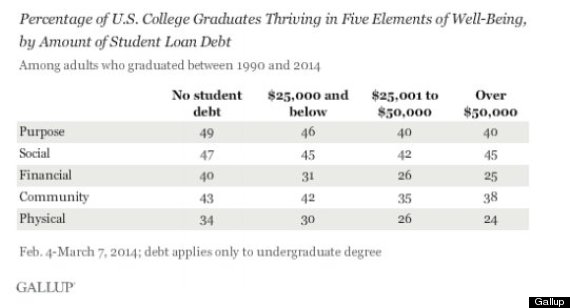 Gallup noted that even after controlling for socioeconomic status (using the common proxy of the mother's highest level of education), the most indebted graduates still had lower ratings in well-being.

Graduates' well-being may suffer in part, Gallup suggested, because student debt often leads people to defer major life events, like getting married and buying a home.