Police brutality is not a black problem, nor is it a white problem. It is a people problem, and due to our city's status as one of America's major urban hubs, it is a matter of utmost importance to public school educators. As the Black Lives Matter movement brings the issue to the fore, the Chicago Teachers Union stands in solidarity with the tens of thousands of people in Chicago and across the country who are protesting what many believe are immoral and unjust grand jury decisions in Ferguson, Mo., and Staten Island, New York. The deaths of Michael Brown and Eric Garner represent fathers, brothers and sons, and as educators, either of them could have been a student in our classrooms.

Police aggression, militarization, profiling and a negative perception of low-income, disenfranchised communities are all components of a much greater problem. But above all, it is of utmost importance to understand that we must go beyond "black lives matter" in understanding that all lives matter, and how what we currently experiencing is an indictment our nation's historic treatment of justice. As the past shows, recent uprisings are not new, but merely the latest incarnations of a broken and racist system.

Before Michael Brown and Eric Garner, there was Sam Shepherd, shot and killed while in police custody in 1951, and Emmett Till, murdered at age 14 in 1955. Their aggressors were granted acquittal in both trials, progressing further than recent instances, but with similar results. In Chicago, we've lost Rekia Boyd, LaTanya Haggerty and Robert Russ to overzealous law enforcement practices. Haggerty died when a Chicago police officer shot her following an unauthorized police chase, after Haggerty dropped what reportedly turned out to be a cell phone while exiting her car. Two days later, Russ, a Northwestern University athlete, was killed following an alleged struggle with Chicago police--a narrative similar to the story told by law enforcement in Ferguson.

Rekia Boyd, 22, was walking with friends when she was approached by a Chicago police detective and an argument ensued, resulting in her shooting death. This narrative is also similar to story told by law enforcement in Ferguson. And let us never forget the practices of ex-Chicago police Commander Jon Burge, who was never convicted of his torture crimes against African-American men, despite perjuring himself in the process of a continued cover-up. 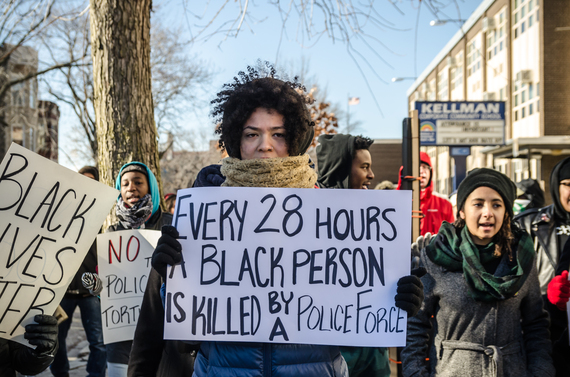 The loss of these lives isn't just an issue of color, but serves as examples of a systemic degradation of trust, community and the continued failure of justice. "We've got to empower the people in our communities to have the final say in how their communities are policed," says Frank Chapman, field organizer for the Chicago Alliance Against Racist and Political Repression (CAARPR), an organization devoted to the creation of an all-elected, all-civilian, district-based police accountability council. CAARPR efforts draw similar parallels to the CTU's call for an elected, representative school board, which is paramount as police presence grows in our public schools. This presence has traditionally been to "serve and protect," but is increasingly having an adverse on education and the ability to build social movements for justice.

"How do [police] justify their presence in the school system?" Chapman asks. "The same way they justify their presence in the rest of the community, by claiming that black folks are their own worst enemy." The national government is incarcerating more African-Americans now than at any other period in history, and black youth are the target, according to Chapman--a condition that is the primary area of focus for the group Project NIA and its founding director, Mariame Kaba. Project NIA is an abolitionist organization focusing on supporting young people in conflict with the law, with a long-term vision for ending youth incarceration. When discussing police brutality, Kaba cites recent slayings that have earned Chicago a loud voice in national cries for justice.

"We've got Desean Pittman who was killed by police; we've got Roshad McIntosh, and we still don't know the name of his killer, who was a Chicago police officer; we have Laquan McDonald, and it turns out now, that they have police officers on videotape shooting him several times with his back turned," Kaba says. "I don't think you have to stretch to be living in Chicago and be an educator and understand the incredible weight on the lives of the children that you work with."

A former teacher and educator, Kaba helped organize a trip to Geneva, Switzerland in November 2014 for a group of young activists of color to testify before the United Nations Committee Against Torture about police violence in America. "These teachers are working in schools with a bunch of police officers who are arresting kids on sight," she says of educators. The district also plays into notions of criminalization by using terms like "probation" in school ratings and issuing suspensions and expulsions in lieu of restorative justice and other alternative ways of dealing with disciplinary issues.

Johnae Strong is a second grade teacher at Ogden International Elementary and co-chair of the Chicago chapter of the Black Youth Project 100 (BYP100), a member-based youth activist organization that organized a nearly 200-person healing, education and protest occupation of Chicago's City Hall on Nov. 25, 2014, in the aftermath of the Ferguson grand jury verdict. Much of the BYP100's focus is on direct action organizing and civic engagement, but the group's biggest principle is political education. While pushing externally against the opposition through direct organizing, "we also recognize that we have gaps in our knowledge within our own community that we have to shore up through teaching each other, through building a dialogue that is radically inclusive," Strong says. 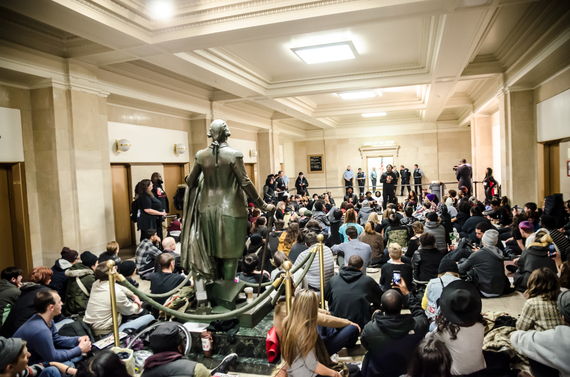 "For us to say that black lives matter is not to devalue other lives; it's just to affirm the fact societally, socially, it's not a present reality," Strong says. "While we know as black people that our lives matter in that we live and breathe and have purpose, we're not affirmed of that when we walk outside of our houses."

There are disproportionate numbers of arrests among people of color in relation to the population of the city of Chicago, and the numbers in Chicago Public Schools are no different. Currently analyzing 2013 data, Kaba says that in 2012, African-American children made up more than 70 percent of school-based arrests, yet only 42 percent of the district. Teachers and students need shared knowledge of what each is experiencing, and must learn how to pull from one another for knowledge and understanding. There are internal (class size, influx of testing, lack of resources) and external (crime, poverty, segregation) forces at play, but all are related institutionally, structurally and interpersonally.

"We need to do the very best we all can to make sure we keep kids in that [class]room, to the best of our ability, because when they're not, then bad things usually multiply," Kaba says.