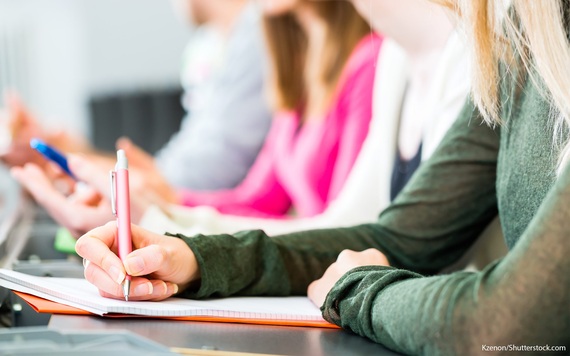 As many 2016 high school graduates prepare for college, many students are wondering if they should go to college at all. Statistics have long shown college graduates out earn those with lower levels of education. But the answer to the question of whether higher education pays off has been posed far more frequently in recent years as the country's combined student loan debt load has climbed past $1.35 trillion, according to MarketWatch. That's a lot of money to invest in your education, so it's good to know whether or not you're making a good investment when you pay the cost of college.

Read the full article on GOBankingRates>>>

As the prospect of college grows closer, it's important to assess all the sources of available funding to cover college costs, including savings, family income, student income, grants and scholarships. For example, if you plan on attending college for the fall 2016 semester or attended college in the 2015-2016 academic year, you should file the Free Application for Federal Student Aid (FAFSA).

The federal FAFSA deadline is quickly approaching on June 30, so be sure to file as soon as possible so that you're eligible for financial aid. You should also spend time shopping around for the best loan terms and interest rates, if you need to borrow money for college tuition.

Whether or not you get financial aid at all, student loans are always an option. The average recent 2016 college graduate is projected to have $37,000 in student loan debt, according to Mark Kantrowitz publisher of Cappex.com. That's a lot of debt to take on as a student. So, how can potential, or even current, students decide whether or not college is really worth the cost?

A GOBankingRates analysis of high-paying occupations offered some insight. Although the answer isn't an unqualified "yes," the study showed college is a requirement for the vast majority of the best-paying jobs on the list. Here are five reasons getting a college education can be worth all of that student loan debt.

1. Many Jobs Still Require a Degree

The first reason is the most obvious: A college degree is still required for many jobs. Although the prospect of racking up tens of thousands of dollars in debt can be daunting, consider the fact that all but six of the 45 jobs in the GOBankingRates survey with median salaries higher than $51,500 required a bachelor's. A college degree is mandatory for many occupations in industries including engineering, finance and education.

Earning a bachelor's degree is also a necessary first step for many graduate and professional degrees for other occupations. If you invest the time and money it takes to earn a bachelor's degree, you'll, more often than not, reap the rewards in the long run.

2. Some College Is Better Than None

"Depending on what a student wants to do with his career, it may be possible to accomplish the same goals without the expense of a four-year college education," said Andrea Feirstein, college savings expert and founder of AKF Consulting Group.

Indeed, some jobs with substantial salaries don't require a bachelor's degree -- you can aim for a two-year associate's degree instead, allowing you to spend less on tuition. Professionals including air traffic controllers, radiation therapists, dental hygienists, web developers, building inspectors and electricians all earn median salaries of more than $51,500, with air traffic controllers making more than double that benchmark. Likewise, paralegals, flight attendants and carpenters can earn respectable annual salaries of more than $40,000, which puts them on par with many college-educated peers.

Savvy students could also enroll in a community college or junior college option for the first two years, with the goal of transferring to a more expensive public or private college for the final two years. "The lower the price of that education, whether by averaging down what you pay or by maximizing savings and other sources or minimizing the degree to which one uses student loans, the more likely it is that college will pay off in the end," Feirstein said.

Learn: How to Pay Off Student Loans After Graduation: 9 Helpful Tips

3. Make Enough to Pay Off Loans

If you decide to go to college and take on the average debt load of $37,172 to finish a four-year degree, you might be wondering how much you need to earn to make college worth the cost. One measure is being able to pay off student loans quickly and without breaking the bank.

Assuming the average student loan debt has a 6.8 percent interest rate over a term of 10 years, a graduate would need to earn a salary of $51,333.60 to pay off the average debt load if they devoted 10 percent of their gross monthly income to payments.

That means, for example, that marketing managers, financial managers, benefits managers and construction managers all earn more than enough to comfortably repay student loans without devoting more than 10 percent of their gross monthly income to covering college costs, according to the Bureau of Labor Statistics. And aerospace engineers, chemical engineers, biomedical engineers, mechanical engineers and even K-12 teachers, among others, earn enough.

Often, college costs make sense for many students who opt for less lucrative professions, too. Professionals earning an annual median of $34,222.40 could pay off their student debt in a decade if they were able to devote 15 percent of their gross monthly income to loan payments. For example, interior designers, graphic designers, athletic trainers, social workers and substance abuse counselors all make enough to pay off the average debt load if they are willing to devote a little more of their take-home pay to the task. Plus, if this means you're following your professional passion, it's more than worth it.

"We know that people with a college education have a higher earning potential generally than people with just a high school education," said Feirstein. In fact, college graduates earn $1 million more than high school graduates over their lifetime, according to a 2015 report from Georgetown University Center on Education and the Workforce. And those who earn degrees that set them up for higher-paid professions stand to earn millions more beyond that.

5. Benefits and Experiences Beyond an Education

Although it makes the most sense for students to earn their degree while taking on as little debt as possible, there are other benefits besides a good job and decent salary. "There are benefits to a broader education, not least of which is the fact that your horizons will be expanded and you will be better educated in the long run," said Feirstein. "Every child at least deserves the option to consider higher education and not to think about it just as a way to earn a living."

Whether it's the learning experience of studying new topics, the social experience or perhaps the travel experience studying abroad at a university, college is more than just a professional education. Some of the benefits of higher education just can't be quantified on a pay stub, Feirstein said.

Keep Reading: The Cost of College the Year You Were Born

Jamie Young contributed to the reporting of this article.

This article, Student Loan Debt: Is College Tuition Worth the Cost?, originally appeared on GOBankingRates.com.