If you could see me at the moment you'd find a man blue in the face. Literally blue! And I'm blue from talking about the dangers of student loans over the past years and having it fall of deaf ears.

Recent data from the Federal Reserve Bank of New York and Equifax shows just how dangerous student loans are.

In our slowly recovering economy, people are doing better managing their credit cards, mortgages, auto loans, and home equity loans. But when it comes to student loans it is a freaking disaster.

Student loan 90+ day delinquency rates continue to climb to historic levels and this is debt that traps most consumers into debt slavery by legislation or incorrect assumptions there are no legal remedies for problem student loan debt. To prove the point, here is free help to deal with them. 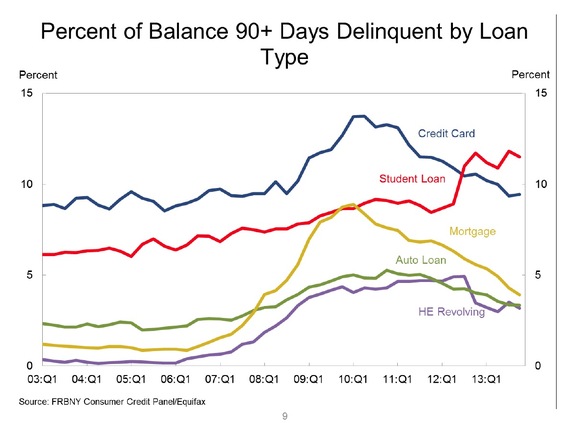 People are still loading up on these life altering loans. And they are life altering for two reasons. First, the majority of people who have student loan debt never graduate with the final degree. They have the liability but not the benefit.

Second, student loans are handed out without any thought of what it will do to the students future life to pay them back. Schools push the loans, parents think they are good, and students load up and find themselves sometimes unable to afford to even work in their chosen fields because they have to take almost any job to make the payments.

About 11.5% of student loan balances are 90+ days delinquent or in default and that figure is often reported low because it does not include student loans in deferment or forbearance and the reason the loans are in that status is because people can't afford them.

Student loan debt doesn't saddle all segments of the population. It strikes particularly at the youngest borrowers in our economy. 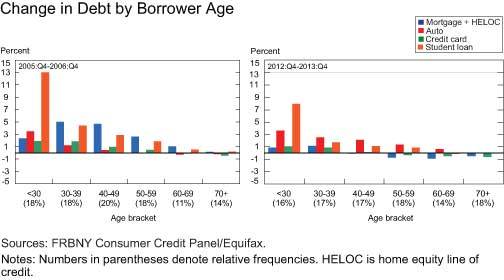 And as you can see above this is not a new problem. It's been building for years.

While people younger than 30 are lapping up these loans, older consumers are also increasing their balances as well. Student loans are becoming a noose around the neck of consumers and poise a risk of stalling a fragile future economy.

As you can see below, delinquent student loans are impacting generations moving forward. 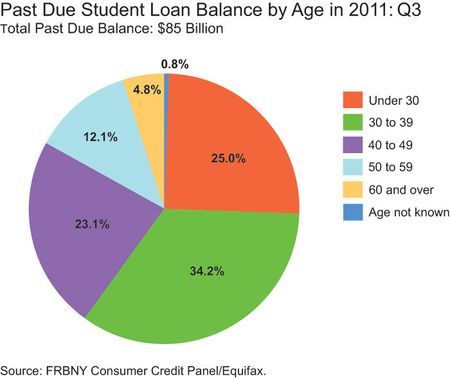 Even parents are risking their future retirements more as the demand for cosigners has increased. And grandparents who do cosign for federal student loans actually risk having their Social Security garnished when Johnny and Debbie can't or won't pay. I've seen a lot of "won't pay" situations.

It's just sad on so many levels.

If you have a credit or debt question you'd like to ask, just click here and ask away.

If you'd like to stay posted on all the latest get out of debt news and scam alerts, subscribe to my free newsletter.

Video Powered by Bank of America: