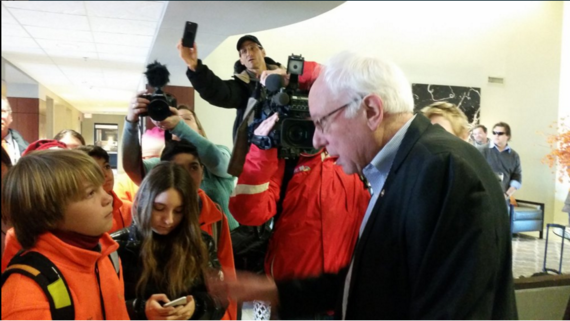 "As the next generation of voters, it's important that we study the candidates, issues and process. Our classroom is on the front lines." -Carlthorp Student

Traveling from Los Angeles to Iowa, a group of 6th graders is learning about the political process in a remarkable and personal way. Today, the day of the Iowa Caucus, where the first votes for the next president of the United States will be cast, these kids are meeting candidates, interviewing political reporters and touring the site of this important event.

I've been following their twitter feed this morning, inspired and hopeful for the future. Here are their impressions and learnings in their own words...

Josh Dawsey @jdawsey from the Wall Street Journal -write the most distinguishing thing you saw, keep under 800 word pic.twitter.com/T6ySxGafke

"Fighting for us" @HillaryClinton rally. pic.twitter.com/S3nLiM4rb9

Caught Sanders's Campaign Manager on his way to A Cooper. Attributes the Bernie surge to his message of equality pic.twitter.com/XjDvsaWq9J

Advice to @KidUnity - listen to people and be true to who you are. Good pols make mistakes but aren't phony. Concede mistakes and move on

"Interviewing the candidates is exhilarating and nerve racking at the same time." -Carlthorp Student

This trip was organized by Kid Unity, a non profit group started by two fathers Peter Sheehy and David Snow at Carlthorp School in Santa Monica (where my daughters attend elementary school). Kid Unity's intent is to teach kids about activism, community participation and how to use your voice to make change. What an incredible opportunity for these kids, learning now how to live with intent by truly taking action and participating in this incredible process.

"We are part of the process" -Carlthorp Student