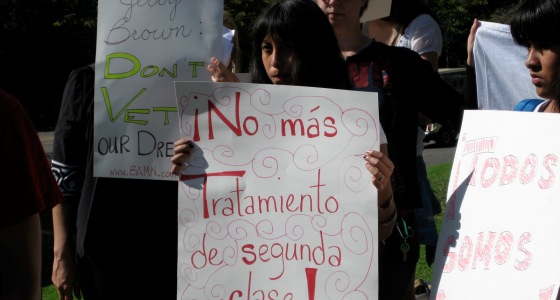 The second part of the California DREAM Act has reached Governor Jerry Brown's desk, and students and activists are demanding that he sign it. A group of activists from the national organization By Any Means Necessary (BAMN), local educators, and middle school students held a press conference on September 1st at the UC Berkeley campus to spread the word about the upcoming deadline for passing the bill.

Yvette Falarca, a teacher at King Middle School in Berkeley, CA, brought some of her students with her. The students were there with the consent of their parents to speak out to the press about why the DREAM Act is important to them. Zaira Romero said, "I came to fight for my rights to go to college. Even though we're not from here... We're trying to tell them we want to be something in life."

The first part of the CA DREAM Act, AB 130, which passed in July, allows undocumented college students in CA to receive private funding and scholarships. The second part, AB 131, would allow undocumented students to be eligible for state and government funding - the difference between going or not going for many students.

The group had planned the conference in that particular location because it was in front of the UC Berkeley Chancellor Robert Birjeneau's office. Birjeneau came out and informed the activists that he would not be able to attend the press conference, but that he supports the issue. "I believe [the governor] will sign it," said Birjeneau, who is also writing an op-ed for the Daily Cal in support of AB 131. "But we cannot forget about the Federal DREAM Act," he said, reminding the group that they need to take their fight to the Federal level.

However, the group was not satisfied. They wanted him to commit to urging the University of California Board of Regents to pass a UC DREAM Act, that would open up options like the UC Blue and Gold Opportunity Plan to undocumented students. The chancellor said, "I'm working on this behind the scenes to figure out a strategy..." but one person replied, "We can't secretly support it!"

Tania Kappner, one of the founders of BAMN, and a graduate of the Education School at UC Berkeley, said this movement feels like the struggle for Affirmative Action during her time as a student.

She's currently a history teacher at Oakland Technical High School in Oakland, CA. She does not trust that Brown will sign the bill, because he approved the extensive budget cuts to higher education in California -- a state that ranks near the bottom of the list in terms of funding per student. "Brown could go either way on this," she said.

Ronald Cruz, a BAMN attorney and Boalt Law School grad, said that the announcement by President Obama that undocumented college students would be low-priority for deportation, made it easier for students to speak out in favor of the DREAM Act. "With the attack on public education right now, the DREAM ACt is core to keeping the American Dream alive for all," he said.

College Grad Under Threat of Deportation Has Reason To Hope