A few weeks ago I mentioned that God seems to be going green. Or houses of God, that is. The most recent news on this front comes from Abu Dhabi, where students have designed a sustainable template for "mosques of the future in the UAE."

According to Khaleej Times Online, 38 students of the School of Architecture at the American University of Sharjah have designed a mosque that taps no electricity from the grid. Instead, it uses solar panels, wind towers, geothermal cooling, shading devices, wind turbines, and natural ventilation.

"We decided to focus on mosques because of the number of mosques that are in the UAE, the cultural significance associated with it, and the fact that it is pedagogically reasonable to design a green mosque," says Dr Ahmed Mokhtar, Associate Professor of Architecture at the school. 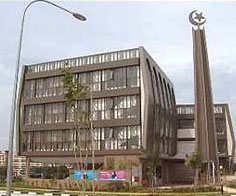 So how do you green your mosque? If you are an imam (Muslim spiritual leader), sign up for the environmental conference.

More From Mairi Beautyman on Huffington Post
Germans and Their Scornful View of Tap Water
Could You Live Without a Refrigerator?
The Octuplets and their Massive Carbon Footprint: 30,400 Disposable Diapers and Counting