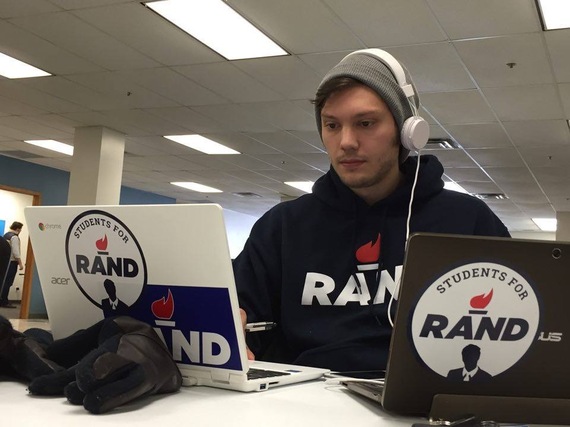 DES MOINES, Iowa-- With the Iowa caucuses only seven days away, the Rand Paul campaign is working to secure students caucusing for their candidate.

Cliff Maloney, 24, is the National Youth Director for the campaign. He has been working on an initiative to have 10,000 students turnout to caucus for Paul since September. Maloney said he is confident that they will reach their goal Monday, Feb. 1. 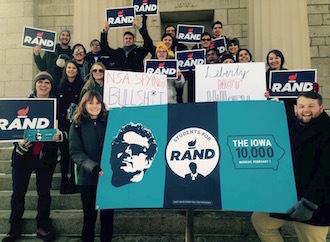 Photo courtesy of U of I Students for Rand chapter.

"In general, my sense of it is that he has a fair amount of our support," Gerry Redlinger, 26, said. "I went to a rally in Iowa City and it was very easy to get, like six friends to go with me. It wasn't even a challenge to do that and that's kind of maybe rare for a politician... and some of them weren't even Rand supporters. They just wanted to hear him."

When Redlinger first heard that the goal was to get 10,000 students out to caucus, he said he thought the number seemed low.

Anna Schuchert, 19, said that although she can't disclose the amount of students pledged to caucus for Paul from the University of Iowa, the campaign will meet its turnout goal across the state no matter what.

Schuchert is a freshman at the U of I and is involved with on-campus campaigning. Maloney said the campaign has by far the most organized youth effort of the candidates and volunteers are highly active. 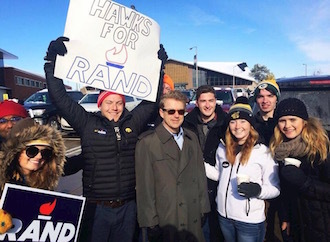 "There's no other student group that you see on campus more than Students for Rand," Schuchert said.

Schuchert became involved with the campaign when a friend invited her to a Students for Rand meeting Before that, she said she was never really interested in politics. However, that has changed since she began to follow Paul.

"All of the reasons that I hated it, I absolutely love it," Schuchert said.

According to a campaign e-mail, the campaign has 1,000 precinct captains in Iowa and is ranked in 5th place by the most recent Fox News poll. Schuchert said a precinct captain's goal is to get 30 people each to caucus for Paul.

Hey @FoxNews, When choosing debate candidates, be sure to use your own poll. You'll see @RandPaul in 5th! -America pic.twitter.com/Yj5ytqzwqa

"A lot of the weight falls upon the University of Iowa shoulders, because we are the biggest SFR chapter in the state of Iowa," Schuchert said. The Students for Rand at University of Iowa Facebook has 613 likes. The campaign would not disclose exact numbers.

Maloney thinks that one reason millennials support Paul is his stance on privacy. Millennials are defined as the generation of people born between 1980 and 2000. 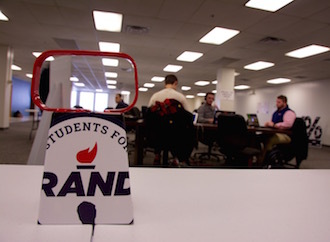 Gene Nassif, a 21-year-old law student at Drake University, finds Paul's financial stances most appealing. He said that he doesn't want to be burdened with high taxes, as well as student loans after law school.

"As a college student, how far my money goes has definitely been affected the past five years," Nassif said. "Buying groceries even has gone up, whereas some other things haven't."

For Redlinger, a graduate from U of I, Paul's consistency and track record of voting the way he says he will is important.

"He was the candidate that I was most excited about even before he announced," Redlinger said.

Redlinger mentioned Paul's social media marketing, appearances on late- night shows and his "Ask Me Anything" on Reddit as ways he has reached out specifically to millennials.

Although Students for Rand has been pushing for millennial votes, Schuchert accepts that he does not have as strong of a rapport among college students like Bernie Sanders does , but cites a lack of policy knowledge as the primary reason. She said Sander's platform of free college is appealing to college students, but isn't realistic.

"My dad actually calls him [Paul] the thinking man's candidate, it just proves he's intelligent, at least for a certain group of millennials being intelligent is something you look up to," she said.

Volunteers from 32 states have flocked to the Rand Paul headquarters in Des Moines, to reach out to voters. More than 60 volunteers call Iowans daily. In one day alone, the campaign has reached out to 60,000 people. Many of the volunteers are college students, with an average age of 21.

The campaign plans to continue building momentum with college students at upcoming rally events. Rand Paul has rallies scheduled at Drake University on Jan. 28, University of Iowa on the 31, University of Northern Iowa Jan. 30 and Iowa State on Feb. 1 before the caucus.

Even if the campaign has students pledged to caucus, it isn't a guarantee that they will actually go.

"We've got more than we need to hit our goal, and now it's just getting them to show up," Maloney said.