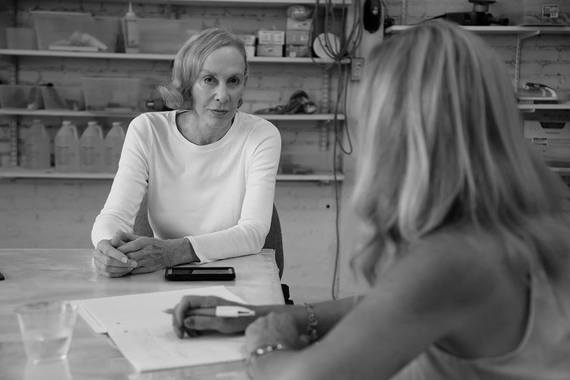 "Einstein's realization that light (which is color) is the quintessence of the universe paralleled the apotheosis of light by artists. Before Einstein made his discovery, Claude Monet announced that "the real subject of every painting is light." Echoing this sentiment, Einstein later commented, "For the rest of my life I want to reflect on what light is."
- Leonard Shlain, Art and Physics

Light is a lifelong obsession for the most brilliant minds, bringing artists and physicists into critical dialogue through their parallel explorations. For centuries, scientists have asked: "Why is the sky blue?" Einstein answered this fascinating question in 1910 in his groundbreaking paper on "critical opalescence," by explaining the physical basis of the sky's blue color in complex scientific equations. But one year earlier, Henri Matisse -- the great master of color -- painted a variegated, light-filled blue sky in The Dance.

Visual imagination proceeds cognitive knowledge, and sometimes artists can visualize scientific breakthroughs before physicists can explain their mechanics. As Leonard Shlain explores in his fascinating book, Art and Physics: Parallel Visions in Space, Time & Light (a text I loved for years when I taugh aesthetic philosophy at Art Center): "When Manet and Monet altered people's experiences of color, Kirchhoff altered our knowledge about it."

Helen Pashgian's lifelong exploration of light traces back to her vivid childhood memories of Old California -- a primarily rural, pre-World War II landscape, filled with the combined scents of orange, lemon and avocado groves, eucalyptus trees and ocean air breezing through clifftop farms along the coastline. Pashgian's love letter to Old California recalls Joan Didion's heartfelt essays, because she combines intellectual depth with emotional depth, grounded in the California landscape. Pashgian has always been at the vanguard of the California Light and Space movement, and today she continues to move ahead of the movement she helped pioneer. Why? Because like Einstein, and all great artists, she never loses her childlike curiosity about light. 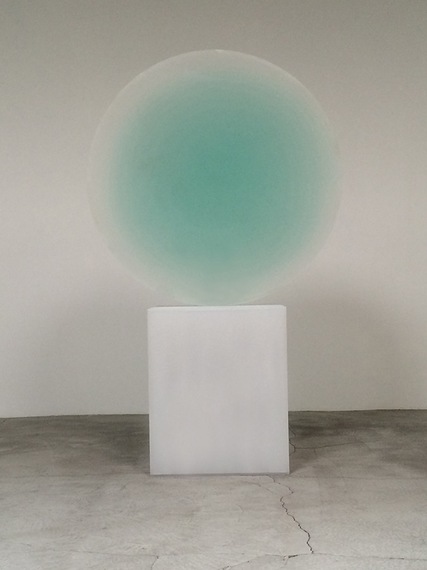 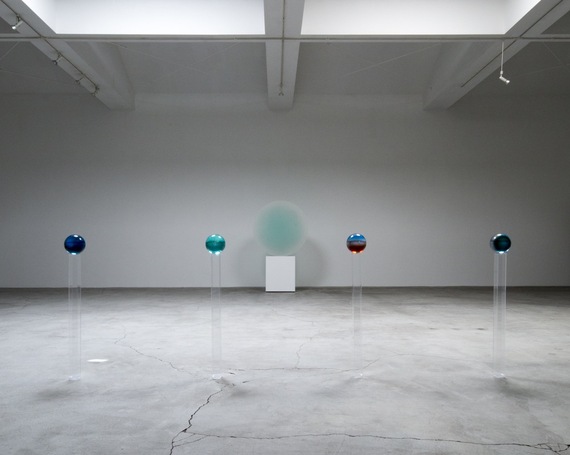 When I visited Pashgian's studio in Pasadena, she showed me one of her latest pieces from a series of discs which will be on view at Ace Gallery later this summer. These new works are even more minimal than her past work, and seem to magically disappear into space. The logistics of making these fragile new works is extremely complex, demonstrating that once again, the grand dame of light, is still at the cutting edge. Great artists sometimes do their most inventive work in their 60's, 70's, 80's, 90's and a surprising number live beyond 100 years old -- still working. So much for youth culture. It is every authentic artist's dream to make work until the day they die -- maybe chronologically old, yet young at heart (which today is called "real age".) Recent neuroscience has proven with brain scans that artists' brains do not age or deteriorate as fast as the brains of non-creative people, because artists build new synapses through problem-solving and the mind-and-body coordination required to physically make art.

Although Pashgian was a pioneer in the California Light and Space movement in the late '60s, curators did not include her in some major early shows, because as James Turrell (her close friend and supporter) writes, Pashgian "was not initially accorded the position of her male colleagues." But Pashgian insists that she herself did not feel this at the time, emphasizing that she and Mary Corse did receive the respect of their male artist peers. But she did not live in Venice, where the male critics and curators visited the boys' club. She lived mainly in Pasadena (after a period in Boston) where she grew up "working very privately and focused" because she wanted to "eliminate distractions by being apart from the Venice club."

In 1970-71, Pashgian was a resident at Cal Tech, working with chemical engineers and JPL theoretical scientists. She insists that "the most important thing about those two years" was her "friendship with the Nobel prize-winning physicist Richard Feynman, because he loved to talk about art." She discovered that for both an artist and a scientist, "the process of thinking for a long time about questions is a very similar exploration." Being an artist, like being a scientist, "is difficult, and sometimes when you are not physically working, the ideas are still beginning to work themselves out in the unconscious."

She recounts a story about a technical issue she could not resolve until she was inspired by listening to a brilliant lecture at a conference in Aspen, Colorado given by actor/historian Sir Peter Ustinov, and the answer to her question suddenly came to her. She says, "the answer was in there working, but it took the right situation on a different topic when I wasn't consciously struggling for the technical answer." Ustinov's talk on the Cold War was unforgettable. Pashgian explains, "He said, 'No great idea is ever formed in a committee. It is always created in the mind of a single individual.'" Then he asked, "How many people remember the Minister of Culture in Austria in 1905, and how many remember Gustav Klimt?" 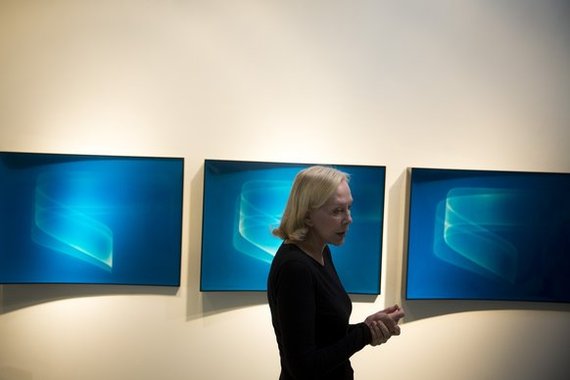 The Light and Space movement has defined California art because it is anchored in personal experience of physical space created by the distinctive atmospheric light which forms native Californians' perception. When Pashgian showed in New York in 1971 -- coinciding with Laddie John Dill and Robert Irwin -- the exhibitions were trashed in a New York newspaper as "Californian - as of no significance at all." Pashgian laughs that "the shows were rejected in New York out of hand. They threw us away."

Of course, California Light and Space artists were soon celebrated internationally. But it is really in the past five years that Pashgian has received major acclaim as one of the most innovative artists from this movement. In 2010, a survey of her work was shown at Pomona College Museum with an accompanying catalogue. In 2012, she first showed at Ace Gallery and her work was included in the Pacific Standard Time retrospective. However, it was really in 2014 that she took her rightful place in history by mesmerizing crowds with a major installation at the Los Angeles County Museum of Art: Helen Pashgian: Light Invisible, which also toured Nashville's Frist Center for the Visual Arts through January 2015. Like Turrell, who spent a decade thinking about his astonishing crater work, Pashgian retreated for a decade to think through this monumental work.
  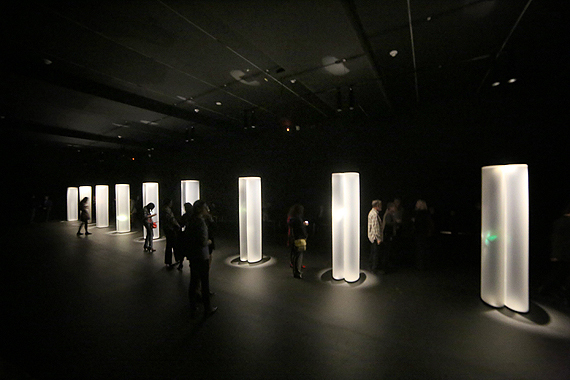 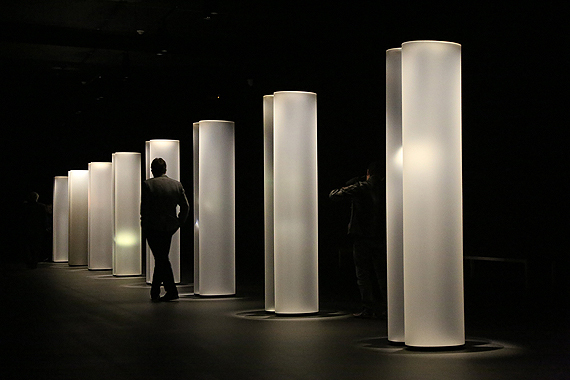 Her magnificent installation of a row of 12 eight-foot-tall double elliptical lit columns - made of semi-translucent molded acrylic and illuminated from within with geometric forms - engage the viewer, like participatory theatre. Pashgian's remarkable work was bought by LACMA and will tour again. This coincided with a major survey exhibition of works from 1966-2014 at Ace Gallery Beverly Hills, where her selected works are currently on view. These ethereal, interactive sculptures alter refracted light and the perception of space by using opalescent color to change the feeling of the space they disappear into - like a flickering Tinker Bell fairy or angel's hallow. 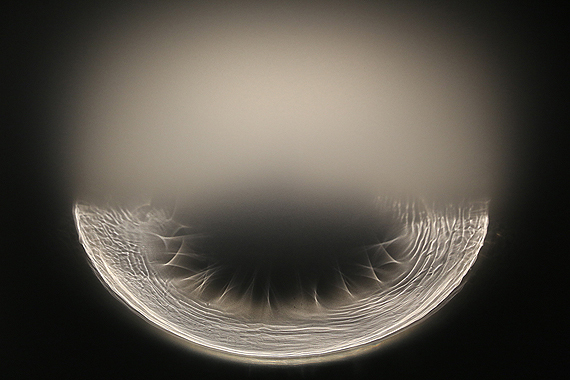 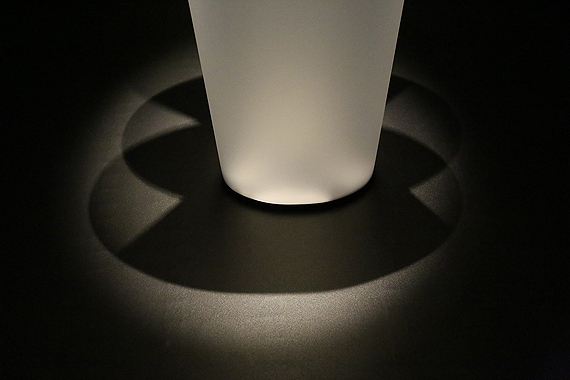 Turrell writest that Pashgian's work "bridges the material and the immaterial, the visible and invisible." He asks, "does she spiritualize the material world or materialize the spiritual?" For me, this dematerializing spatial dynamic recalls Immanuel Kant's philosophy of the invisible noumena beyond our senses - and the phenomena of sensory reality, like Platonic forms outside the metaphoric cave. Pashgian's work evokes Kant's transcendental aesthetic of the sublime - limitless and unknowable; we can only imagine in glimmers, but it fills us with awe, the same awesomeness we experience in the grandeur of nature. It is a transcendental aesthetic transformation of the perceptual experience she felt growing up in rural southern California.

As a philosopher, I lack tolerance for shallow thinking - and superficial people - amidst the current crisis of shallowness in social-media culture. It is inspiring to visit a brilliant, mature woman artist - who is a class act - in an era dominated by a crass young generation of artists who are more concerned with strategy and instant fame calculated to attract greedy speculators (and even resorting to blatant plagiarism as "re-imaging" which is not even "re-imagining"), which is so unlike the solitary, independent, reflective, deep thinking life of an authentic artist or scientist. Are we entering the era of GMO art? Where is the love of real art in this? Or the love of nature that informs great art and physics? Where is the imaginative experience transformed into art that can resonate with the viewer? It might look a bit like art, but it does not feel like art, because it is inauthentic, copy-cat art. Only history can determine the art that lasts - after the clownish, narcissistic party-politics are forgotten - and Pashgian has endured the marathon for almost five decades because she is the real deal. 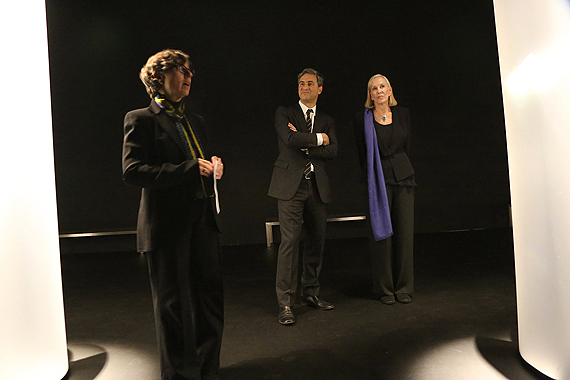 Pashgian is without question the leading lady of light and one of the most historically significant pioneering artists in Southern California. Amusingly, her name "Helen" is Greek for "light" - just as my name "Lita" is Latin for "light." So, I am proud to be the first art critic to shed light on Pashgian's latest light-filled discs for her upcoming show at Ace Gallery, which should cement her rightful place in both art history and the history of physics. 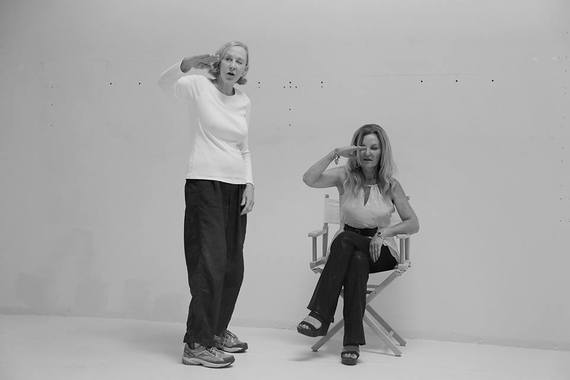 She was also included in a group show at Descanso Garden's Sturt Haaga Gallery which closed April 5th.

--A 10-minute film produced by the Getty: https://www.youtube.com/watch?v=SHj2vEPuelw

--One hour panel conversation at the Getty: https://www.youtube.com/watch?v=Loppy74-Z0I