Hearing that Barack Obama is visiting his ailing grandmother made me think of another old-timer who's hanging in there, hoping to see history made if America elects its first African-American president.

And so I gave him a call. Studs Terkel, now ninety six years old. He's done as much as anyone in this country - and far more than most - to advance civil rights. He wrote oral histories and other books and hosted a radio interview show on Chicago's WFMT for forty-five years.

I asked Studs, if he were to interview Obama, what would he ask him? That got him going. Studs is always "going." When he talks, he's going, still today, full speed ahead with ideas and enthusiasm. The unmistakable ever-crackly voice on the end of the line shouted,

I'd ask Obama, do you plan to follow up on the program of the New Deal of FDR?

I'd tell him, 'don't fool around on a few issues, such as health care. We've got bigger work to do! Read FDR's second inaugural address!'

The free market has to be regulated. And the New Deal did that and they provided jobs. The government has to. The WPA provided jobs. We have got to get back to that. We need more reg-u-la-tion.

I was just watching Alan Greenspan, he's an idiot, and by the way so was Ayn Rand!

Community organizers like Obama know what's going on. If they remember. The important thing is memory. You know in this country, we all have Alzheimer's. Obama has got to remember his days as an organizer. It all comes back to the neighborhood. Well I hope the election is a landslide for Obama. 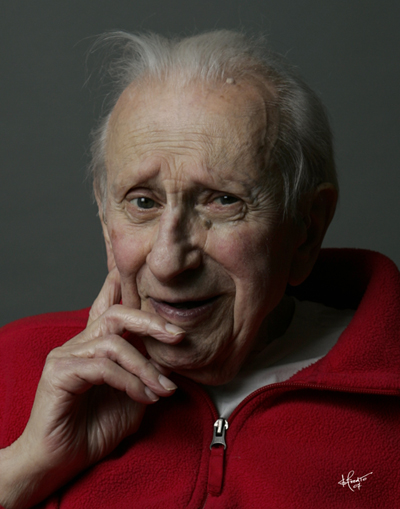 I started to ask Studs about the pioneering Chicago organizer Saul Alinksy, whose name has been disparaged recently by the Republicans and as soon as he heard that name, he belted out,

The idiots! They label Saul Alinksy - the great neighborhood organizer - as a subversive! He's been dead for 35 years and he was honored by the Catholic Church! He's no subversive. Neither is Bill Ayers! That Sarah Palin - you know, she's Joe McCarthy in drag!

This from a man who was investigated by Joseph McCarthy and the House Un-American Activities Committee in 1953. Studs refused to give evidence against other left-wing activists and he was blacklisted and his television contract was canceled.

So you know what? Obama can't be a moderate! He's got to remember where he comes from! Obama, he has got to be pushed!

Hey, tell them I've got the new books coming out! The first one is called P.S.
It's got a great interview with James Baldwin, when he came back from exile in 1961. And one with Yip Harburg, ya know him? He wrote "Brother, Can You Spare a Dime". The way we're going, that song could be written tomorrow!
And the second one is a reprint of Hard Times: An Oral History of the Great Depression. That one too could be written tomorrow.

Studs Terkel has been a conscience for America, for decades before Barack Obama was born. In fact he's eleven years older than Obama's grandma! He was at the freedom marches in the North and South and he always interviewed people about race- in fact he "wrote the book" on it. Studs did his part to make this a more just nation. Now, the way things are going, it looks like the 96-year-old man, rooting for the 47-year-old, may witness another big step in American history.

"I'm very excited by the idea of a black guy in the White House, that's very exciting," Studs said as we said goodbye. "I just wish he was more progressive!"