When we're worried about our health, we're often concerned about... you know, making sure that we don't die.

Modern medicine is pretty clear about the health benefits of exercising regularly, eating a diet high in fruits and vegetables, not smoking, and consuming alcohol in moderation. It is well-documented that engaging in all four of these healthy habits can significantly reduce your risk of death.

But a recent study has shed light on a much less-research question: if you are overweight or obese, does being healthy do as much good as it does for thinner people? Or are you doomed to never be as healthy as "normal" weight people?

The results of this research may surprise you.

Researchers looked at a sample of 11,761 people over 21, and figured out how many of the following four "healthy habits" they regularly exhibited:

They divided people into groups based on their BMI ("normal," "overweight," and "obese") and based on how many of the four healthy habits they regularly did. They compared how much more likely members of each group were to die over a period of more than 20 years than people with a healthy BMI who engaged in all four healthy habits. They call this the "hazard ratio."

If the hazard ratio is more than 1, you are more likely to die than a person who is at a normal weight who does all four healthy habits.

Let's look at a chart of what they found, and then I'll break it down for you:

Risk of Mortality, by BMI and Number of Healthy Habits 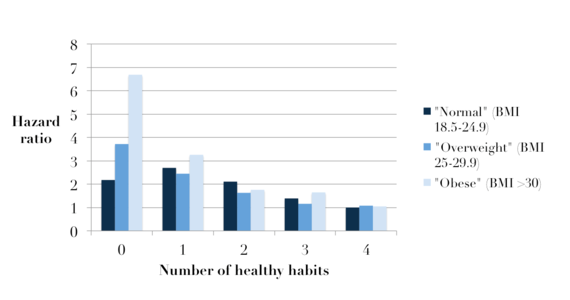 Four things are striking about these findings:

1. Among people who have ZERO healthy habits, yes, it's better to be in the normal BMI range.
If you are going to smoke, drink a lot, not exercise, and eat very few fruits and vegetables, yeah, it's probably a good idea to be in a "normal" BMI range. People with an "overweight" BMI in this category are at a significantly higher rate of mortality.

That's that YUUUUUGE light blue spike on the far left of the chart.

How wild is that?

3. Taking on an extra healthy habit has a bigger impact on your risk of death than lowering your BMI.
Again, this kind of blows my mind, but it is true nearly across the board. For example, if you are an "obese" person with only one healthy habit who lost enough weight to have a only an "overweight" BMI, your "hazard ratio" would drop by 25% (from 3.3 to 2.5). Not bad.

But if you instead just took on one additional healthy habit, your hazard ratio would drop by 45%! That's nearly twice as much!

4. Once people have all four healthy habits in place, their death rates are virtually indistinguishable.

This point is so important that I made you another, simplified chart to make this 100% clear:

This is freakin' crazy.

The research suggests that when it comes to lowering risk of death, as long as you engage in healthy habits such as healthy eating and regular exercise, it doesn't matter what you weigh.

What are the counterarguments?

The obvious counterargument is, "Well, death isn't the only thing that matters when it comes to health. Quality of life matters, too."

And that is certainly true. But it's important to note that mortality rates are relatively good predictors for quality of life.

For example, one thing that ruins quality of life is heart disease. Matheson et al. point out that taking on a single healthy habit reduces heart disease between 29% to 85%, while statins (cholesterol-lowering drugs) only 12%.

12% versus 29-85%. In other words: taking on a single healthy habit is at least twice as effective, and potentially seven times as effective as taking cholesterol-lowering drugs. Which one would you choose?

Moreover, if people are getting nutrients from healthy foods, exercising regularly, not smoking, and drinking only moderate amounts of alcohol, they are likely to be feeling relatively good. I mean, don't you feel better when you do those things?

One of my favorite things about this study was how relatively "chill" the requirements for healthy habits were.

All a person needed to do in order to be a "healthy eater" was to eat five servings of fruits and vegetables per day. That's it. The study didn't measure how much sugar, how many carbs, or how many slices of cheesecake they ate. As long as you eat your fruits and veggies, the rest of your diet is basically up to you.

All a person needed to do to be a "frequent exerciser" was to exercise 12 times a month, or about 3 times a week. But the researchers didn't measure how long that exercise lasted, or how intense it was. Meaning: that leisurely 20-minute walk around the block you take a couple of times a week? Totally counts.

I wrote about it more here, but I believe that one of the tragedies with modern health and fitness is that because people are convinced that they have to go to CrossFit six times a week or give up sugar completely, they forget that they can be healthy in a relatively easy, do-able, everyday way.

If you want to improve your health, why not focus on these relatively simple healthy habits instead of killing yourself going on diets that don't work for you?

No matter what your weight is.

Are you used to "having it together" in your life, but your eating + weight is the little piece that's not going right? Check out Katie's free "Get Started Guide" -- a free, 22-page ebook with personalized tips you can try TODAY.

Or check out Katie's blog for nearly 100 articles on luscious and intuitive eating.