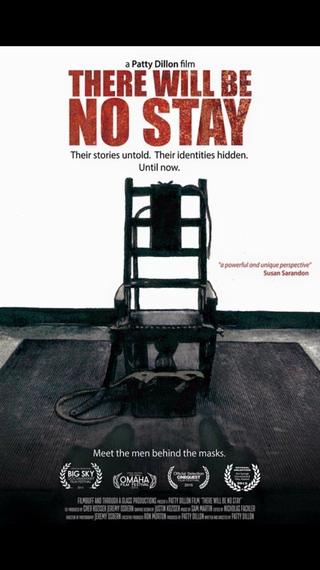 A journey of compassion and consequence, through a process shrouded in secrecy, two executioner's lives intersect on a path to discovering freedom from their own personal prisons.

After a few years of performing stunt work on television shows like Dawson's Creek, One Tree Hill, and Eastbound and Down, Patty Dillon had a sudden drive to get behind the camera. In 2010, she jumped on the opportunity to move back to Omaha to learn from producer/director Dana Altman, Robert Altman's grandson, who taught her the fundamentals of movie making.

Execution through the eyes of the executioner... As a first-time documentary filmmaker, Dillon had the deep desire to explore a topic never before tackled on film. She conceived the idea in 2008, on a call with Dr. Ronald Morton, a friend who would later become her debut film's executive producer. They were talking about how it's common practice for executioners to sanitize the condemned's arm before administering lethal injection. The irony of this practice inspired Patty to write a 13-part series about various facets of execution, called Dichotomy of Death. While researching the first episode, "To Kill the Killer," she began to see an obscure, untold story, and telling the story became somewhat of an obsession. "With executioners still wearing hoods in Florida, these men were literally shrouded in secrecy and hiding out," she says. "They were next to impossible to track down, and the only ones I could find had taken their own lives. I assumed there were others out there suffering in silence and I had to find them."

Dillon decided to drop the series and pursue "To Kill the Killer" as a full-length documentary film, There Will Be No Stay.

As writer/director and producer of There Will Be No Stay, Dillon was completely out of her element, and she wanted it that way. One of the first hurdles in getting the film made was choosing a crew who was experienced enough to provide the kind of support she needed to shoot and produce a successful first film. With Jeremy Osbern on board as cinematographer, and Nick Fackler, whom she had worked with in the past, as her editor, she was ready to move forward.

Making a movie that exposes the devastating effects of state-sanctioned homicide was no easy feat. First off, there was the seemingly impossible task of finding an executioner, let alone one who would talk on camera -- a process that took just under a year of poring over records, calling, emailing, calling again. She set out in search of just one executioner who would let her in, and found two men whose paths had crossed in their unusual line of work. "The biggest challenge was finding my cast," she says. "Ultimately what I wanted to do was form an execution team -- warden, chaplain, and executioner. Then I thought it would be really powerful to have a victim's family member involved."

After a lot of knocking on doors, Dillon secured interviews with two former South Carolina executioners, a former Georgia prison warden, and a former Texas prison chaplain. "Going into the film, my agenda was really to educate myself, but the further I got into it, it became about telling the story of the execution team," says Dillon of the human element of her film. "I'd have conversations that went on for hours sometimes with the executioners, where I'd shut that filmmaker part of me down and just listen to them talk. I found myself becoming part of their recovery and wanting to help them heal. It was really quite dark at times and there were more than a few nights where I cried myself to sleep."

From concept to cameras rolling, There Will Be No Stay took four years to get off the ground, and on Oct 15, 2012, Dillon and her team went into production. With commitments from investors who were excited about the film's unique approach, but no great sum of money to carry out the full project, Patty and her co-producer Chevy Kozisek piecemealed the budget, scraping by enough to keep the cameras rolling.

Day one of shooting involved filming exterior shots at the execution of Eric Roberts at South Dakota State Penitentiary, with protestors in full effect. Then exterior shots at an execution in Huntsville, Texas. Polarity is an ever-present theme in the film, and Dillon does an impressive job of navigating a complex topic -- essentially by presenting a bird's eye view while letting the audience connect the dots. "Activism in itself can be very violent, a form of opposition, and that's something I wanted to capture, too -- the range of human emotions around the topic and the contrast between the pro-death penalty supporters, the anti-activists, and the families of the condemned," she says.

Another major hurdle was getting footage of a death chamber. Even death chambers that were out of use were carefully guarded, which pushed Dillon to be even more headstrong in her quest. She came close to getting access into a death chamber in Arizona, and another in Nebraska, going so far as to meet with Senator Ernie Chambers, but delays and red tape pushed her goal further and further away. Dillon denied an invitation to witness a live execution because, she says, "I didn't want to exploit the final moments of a man's life. Without having any relationship with the condemned or the family, it would have been disrespectful."

Finally, her crew was granted permission to roll cameras on a death chamber in Oklahoma, less than 36 hours after an execution took place -- the very same spot that would become the center of a hot controversy only weeks later. The state came under fire after the botched execution of Clayton Lockett leaked out, a situation where it took the inmate four hours to die as a result of experimental lethal injection drugs. CNN was clamoring for footage; they couldn't get inside, so Death Row Stories narrator Susan Sarandon suggested they call Dillon. Her footage later appeared on an episode of called "Botched," along with an interview of Dillon talking about her experience.

Dillon had previously contacted Sarandon in hopes that she might agree to narrate the film, but after she delivered a rough cut, Sarandon sent her an email encouraging her to do the narration herself. She felt that Dillon's connection to the executioners was integral to the story, and that the film would be missing something with a third-party voice.

During her journey, there were things that Dillon felt were especially hypocritical, things that needed to be made public:

"A former warden I interviewed talked about the shock he felt during his first execution when he heard the condemned's nose break after a mask was put on him. And because the condemned is clutching the chair so hard, the tie-down team is forced to break the condemned's fingers in order to remove the body. When I found out the cause of death is listed as homicide, I was just in awe of the insanity. Also, people think it's cheaper to execute inmates than to incarcerate them for life, but the truth is it costs millions of dollars for every execution."

There Will Be No Stay was completed for just under $200,000, after a seven-year mission to fund, film, and edit. Dillon debuted the film at Big Sky Documentary Film Festival in Missoula, Montana, where it earned award nominations for Best Feature Length Documentary and Audience Choice. At Cinequest Film Festival in San Jose, the film was nominated for Best Feature Documentary and Audience Choice. At the Omaha Film Festival, it earned a nomination for Audience Choice. Though the subject matter was ominous, responses to the film were highly supportive. After turning down a few distributors who came knocking, Dillon said yes to FilmBuff, a New York-based independent distributor with a reputation for supporting creative and edgy underdogs. Under contract with FilmBuff, There Wlll Be No Stay was released on January 19th on Video on Demand and is now available through iTunes, Amazon, Google Play, VUDU, and Xbox.

For Dillon, the rewards of her risky endeavor came in many small but sweet victories, like when she showed it to her executive producer for the first time: "I paced around the house while he watched it," she says. "He's not an excitable guy, but I breathed a sigh of relief when he finally said, 'It's good. We made a movie!" For their own personal reasons, the two executioners have yet to see the film. Says Dillon, "They've passionately repeated that they trust what I've done with their story. There's no pressure; they'll watch it when they're ready."

Not one to sit on her hands, Dillon's got a few projects in development now. First in the pipeline is grooming her autobiographical series Character Shoes for episodic television -- a dark comedy that takes the audience into her evenings as an undercover stripper named "Isabelle." Imagine The Office meets Orange is the New Black, but the office is a strip club. "I spent many nights in a dark corner of the club with a glass of wine, either researching current execution events on my phone or taking notes on the colorful story lines evolving in front of my face -- for the better part of a year, I was writing about either strippers or killers," says Dillon. "If I had a conference call for the film, I would take off my stilettos and put on my flip-flops, ask the valet to bring my truck around, and take the call in my front seat."

She's also in the early stages of an edgy documentary that follows adults who were born "sexually ambiguous," a situation where the parents were forced to chose their child's gender within a month of birth. The film takes a hard look at the grown children and the gender identity issues they are now facing.

As a writer and director, Dillon is extremely gifted at being at the right place at the right time, and letting the truth wiggle out through her cast. Looking back on her debut venture, she acknowledges that making There Will Be No Stay helped her become more human in a way, and solidified her ability to bring a vision to life through the art of film.

"At the beginning I felt awake, like I needed to show what we are capable of doing to another human being when we forget the collective consciousness, that one decision has an unbelievable ripple effect. What my viewer thinks of the death penalty is none of my business, but I found myself asking, 'Why are we killing people to teach people that killing people is wrong?' It's insanity. Isn't it the most premeditated murder of all? Pure insanity. I wanted to find out if people knew what really goes on during the carrying out our death sentences, if it would make a difference. Ultimately, I just felt this tremendous responsibility to do the executioners' stories justice... if I've done that, then as far as I'm concerned, the film is successful."

If you'd like more information on the There Will Be No Stay, Dillon can be reached at FallGirlProductions@gmail.com. 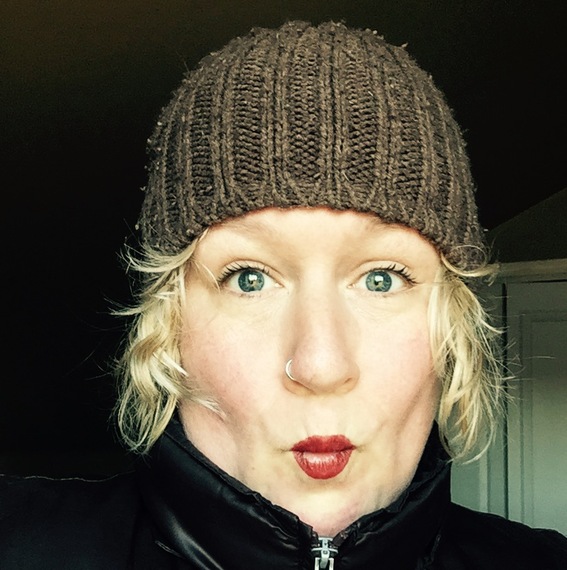 Originally from San Diego, California, Patty Dillon has lived from coast to coast and many places in between. After dropping out of college to teach snowboarding in Keystone, Colorado, Patty decided to combine her athleticism and acting interest to pursue a career in stunts. After squatting in a tent south of Breckenridge for five months, she saved enough money to move to Wilmington, NC, and started training with World Taurus Stunt Award nominee John Copeman. After appearing in a handful of television shows and feature films, she ultimately decided that she wanted to tell stories more than perform... leading her to her current roles as writer and filmmaker.