Take a potentially viral Facebook ad campaign, throw in a stripping model and you've got a mini-controversy.

The Next Web seems skeptical of clothing company Stussy Amsterdam's new Facebook ad campaign that shows a picture of a bundled up model who, the ad says, will strip for "likes." The more likes, the more clothes come off.

The Next Web points out that, because of Facebook's strict no-nudity policy, it's very unlikely the model will bare it all, no matter how many likes she gets. But the site also suggests the campaign may already be in violation of Facebook's promotional guidelines, which note that, "You must not use Facebook features or functionality, such as the Like button, as a voting mechanism for a promotion.”

Arnold Amsterdam creative director, Colin Lamberton, whose agency is behind the campaign, told Adrants, "As you can imagine the model must be suffocating under that many layers of clothing. It is almost a public duty to free her out of this misery so we are expecting Facebook fans to help out here."

Though the campaign has generated hundreds of "likes" already, MemeBurn suspects the ad could backfire on Stussy because it turns the model into a stripper.

Whereas models are glamorous, "Strippers wear clear plastic heels, have daddy issues and are 'doing this to get through college'" MemeBurn writes.

Plus there's the whole hyper-objectification of women, which could alienate female Stussy customers... but probably not. Check it out here -- do you find the campaign troublesome? 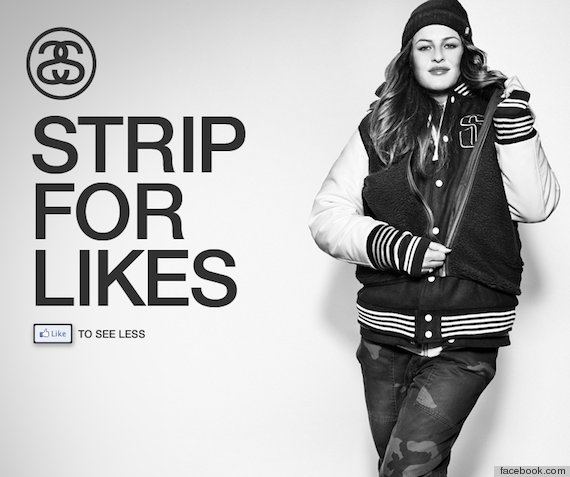 More:
StyleVideopoll
Newsletter Sign Up
An essential daily guide to achieving the good life
Subscribe to our lifestyle email.
Successfully Subscribed!
Realness delivered to your inbox