Last we checked, being gay wasn't a "trend." But Style.com has decided to throw logic to the wind, naming "lesbian chic" one of its hot topics for fall.

In a new article called "The Conversation" (pointed out to us by the gals at Refinery29), Style.com's Maya Singer reviews the "the questions on everyone's lips," including "Are you sick of prints yet?" and "Will anyone wear the Marc Jacobs fur hat?"

Another pressing question of the fashion set: "Is lesbian chic here to stay?"

Lesbians! They're everywhere. This summer, the New York fashion scene was buzzing with gossip about a couple of high-profile ladies who ditched their marriages and started dating women; across the pond, meanwhile, British Vogue ran a whole article on that phenomenon, while society rag Tatler chimed in with a feature on London's seven "loveliest lesbians." (Only seven?) Just last week, Models.com posted photos on its homepage of the nuptials of model Harmony Boucher and her bride, Nicole.

Like leopard print, denim-on-denim and leather leggings, lesbians have come seemingly out of nowhere and quickly become a favorite trend among the fashionable set.

Except, well, lesbians weren't just "invented." The women featured in Tatler were probably gay last year, and the year before that.

In any case, Singer declares that this lesbian fashion boom will impact the industry in myriad ways. "Socially, perhaps it means that in an industry stuffed with attractive young women, a few more of them may start dating each other," she writes. By that logic, we wonder if the same tendency is found in the field of nursing, where about 90 percent of registered nurses are female, or public schools, where approximately 75 percent of teachers are women.

Outside the industry, Singer writes that the growing lesbian fad will impact fashion itself, as in: in with the combat boots, out with the heels! Rihanna's recent penchant for flats is cited as evidence of the changing tides. The logic seems to be that if you wear combat boots, you're probably a lesbian.

Agyness Deyn, Miley Cyrus, Kate Bosworth and everyone in the early '90s might beg to differ.

We've reached out to a rep at Style.com's parent company, Fairchild Fashion Media, for comment. In the meantime, read "Is lesbian chic here to stay?" on Style.com (slide #3). Do you find the premise problematic? 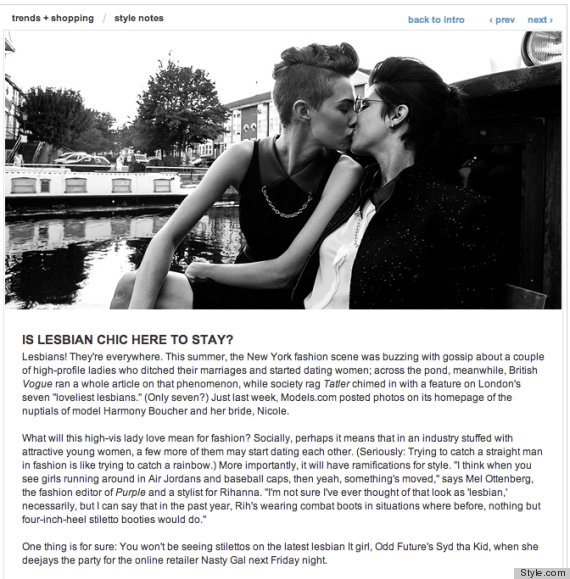 More:
lesbian-fashionLesbianlesbian-stylepollStyle
Newsletter Sign Up
An essential daily guide to achieving the good life
Subscribe to our lifestyle email.
Successfully Subscribed!
Realness delivered to your inbox