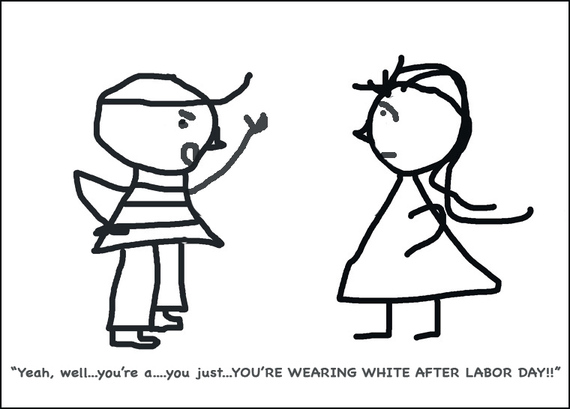 You know that point in a fight when you've gotten through the big, meaty stuff and you're exhausted but still so pissed off you end up going all stupid with something like: "Yeah, well... your... hair is... dumb!!"?

We've all been there. It's childish and embarrassing and I'd say that's pretty much what happened to Pete King this past week. I also think we gotta cut the man some slack because clearly he's hit Crisis Exhaustion Mode, as good an explanation as any for why he went to the stupid stuff in such grand public fashion.

It has been a really tough year... term... era... century, so far. The world over has been bombarded with one serious, high level crisis after another, each erupting in new and more horrifying ways every day: police shootings, racial unrest, children with Uzis, ISIS beheadings, planes disappearing, Russia, Ukraine, Israel, Gaza; Ferguson. It's relentless. And given our overabundance of media and the endless rehashing of "everything that happens" by everyone with a news show, a blog, a computer; a mouth; frankly, we're all exhausted, seriously exhausted.

But politicians... well, politicians are actually supposed to do something about it all. They can't just jabber away and sling mud on social media like everyone else; they're obligated to be wise, make laws, pass bills, and decide things like whether or not to go to war or if bombing a country is a good or a bad idea. Serious, important, life-changing stuff, and, dammit, that takes the right suit!

Apparently beige, "light tan," is not the right suit. It's a pussy color. It signifies... what? Summer whimsy, cocktail parties at the shore, milquetoasty poets, wimpy male quartets? I'm not sure what exactly tipped Pete King's style-o-meter but, frankly, I think he's a bit misguided on the symbolism of beige.

This from an artistic site called Bourn Creative:

Beige is dependable, conservative, and flexible. The color beige is neutral, calm, and relaxing.

How could any congressman, particularly a conservative Republican, not see those as perfect traits for a president?

Then there's this from About Technology:

Beige has traditionally been seen as a conservative, background color. In some cultures, beige garments might symbolize piety or simplicity.

Again, what about that would disturb anyone in regard to the mien of a world leader?

And we'll add this from Incredible Art:

Unification, calm and simplicity. In the madness of a world in crisis, wouldn't these be desirable traits?

Apparently not to much of our media, our culture mongers, and some of our testier politicians, who are so bloody crises-exhausted, they've gone stupid.

The beige backlash is even weirder when you consider the raft of images popping up in recent days of leaders of every political stripe - including the always-revered Ronald Reagan - in, you got it, light tan, some even while conducting important political business with important international dignitaries. In beige!

Yet somehow this hasn't dissuaded King and others (including a stupidly apoplectic New York Magazine, which called the suit "sad") from being outraged -outraged, I tell you - by the sheer audacity of the President wearing what has been slammed as everything from "terrible," to "no taste," to that uber-insult, "grandpa."

Now, presuming there might be four or five people on this earth who haven't yet heard or read the text of Rep. King's color commentary, here are the salient points from Talking Points Memo:

"There's no way any of us can excuse what the president did yesterday." [...]

"You have the whole world watching, you have a week, two weeks of anticipation of what the United States is going to do and then for him to walk out - I'm not trying to be trivial here - but in a light suit, light tan suit, saying that first he wants to talk about what most Americans care about, and he said that's the vision of the second-quarter numbers on the economy," King said. [...]

"It was just a terrible performance by a commander-in-chief."

Now, in all fairness to the fashion-forward representative, he did extrapolate between those quotes that his biggest beef (beyond the beige) was that Obama paid short shrift to essential foreign policy issues in lieu of discussing the economy, thereby indicating - at least to Rep. King - that the President had "no strategy" on foreign policy or even considered it a "major issue," accusations strongly rebutted by the White House.

But whatever you might think about those rather incendiary insinuations, King did introduce them (while trying not to be trivial) by pointing out, in sputtering, true bad-boyfriend indignation, "then for him to walk out... in a light suit, light tan suit..." Well. You can practically see his chin quivering, one hand on his hip, the other waving, indicating that... that... tan abomination he dared put on... I mean, really!

The poor guy. Forgive him. He's just exhausted. The drip-drip-drip of nasty partisan politics, our ugly cultural climate, and a world gone mad in the throes of never-ending crises... he just snapped. He's even tried since to soften the sartorial blow by calling the suit slam a "metaphor" for the President's "lack of seriousness."

But metaphor or moronic, the comments have made their mark on society. And before we throw the baby out with the bath water, perhaps Rep. King has done us the service of bringing to the fore some stylin' tips we could all put to good use, fashion thoughtfulness that might go a long way toward changing the tone and tenor of the business we conduct, from getting that job, having a good parent/teacher conference, negotiating the best deal, winning a court case, convincing her to say "I do," or, even, God love 'im, achieving world peace.

It all comes down to the color of your suit. So pay attention. And think of Stylin' Pete King the next time you're standing in the front of the mirror deciding, "and what color should I wear today?" 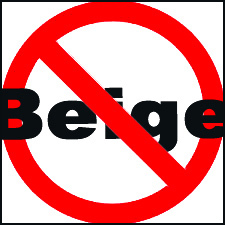 For the symbolism of colors besides beige, go to Incredible Art.

Follow Lorraine Devon Wilke on Facebook, Twitter, and Rock+Paper+Music. Find details and links to her other work at www.lorrainedevonwilke.com and her Author Page at Amazon, and be sure to follow her adventures in independent publishing @ AfterTheSuckerPunch.com.