The promise of a clean environment -- some people demand it, most expect it, a few deny it,
but we all deserve it. So why is styrofoam* (expanded polystyrene foam) still polluting our
tiny blue planet?

Before it ever makes it into our creeks and streams and rivers and the ocean; before it ever covers our beaches and parks and playgrounds; before it ever litters our streets and highways and clogs our storm drains; before it ever makes it into the stomachs of birds and marine life that starve and die; the plastic industry lobbyists do their dirty deed peddling foam cups and to-go food ware from behind closed doors, in secret hallways, and the darkest corners of the California State Capitol; leaving a metaphorical trail of foam litter swirling around at their feet like a plastic gyre in a snow globe as they move from one legislator to another.

We don't live in a snow globe, the environment is not a toy, and there is nothing innocent or pristine about the scene that is going to be played out in Sacramento in the next few weeks. We live in the real world, a world facing serious environmental threats from plastic pollution. 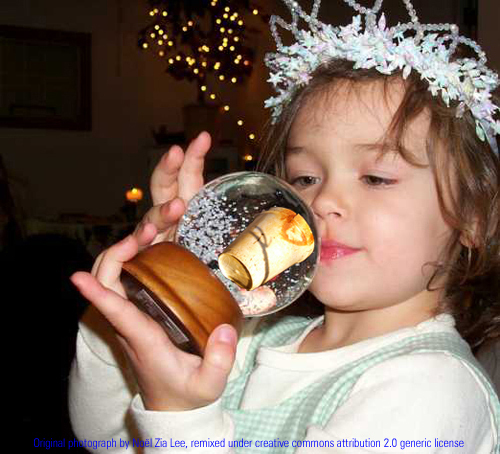 See the world through the eyes of child, because that is who we are doing this for.

But like a snow globe, nothing is going to happen in California, or anywhere else, unless we shake things up.

Shaking things up is what California is about to do as it stands to become the first in the nation to pass a statewide ban on expanded polystyrene foam to-go food ware. Senate Bill 568 by Senator Alan Lowenthal is the groundbreaking piece of legislation that can do it. The bill is cosponsored by Clean Water Action and the Surfrider Foundation.

Last year the SB 568 passed the Senate and made it to the Assembly floor, but the votes just weren't there. Now the bill has one last chance; a window of opportunity has opened. The California Legislature reconvened on Aug. 6, 2012, and the Assembly has until Aug. 31, to vote on the bill. If it passes and is signed by Governor Brown, it will be an environmental game changer for California and the rest of the world.

Demand and production of polystyrene food ware is already declining due to consumer preference for a better product made from alternative, biodegradable and compostable materials. If SB 568 passes, it will boost job growth in California related to manufacturing non-foam packaging.

But is California up to the challenge? Is it still the Golden State? Can it take the lead and show the world how the environment and the economy can coexist and prosper by forging new collaborative alliances?

Are Governor Brown and the Legislature willing to do what it takes to provide incentives to attract new entrepreneurs who will create new jobs and develop new markets for the new environmentally sustainable products that everyone now wants?

The only thing standing in the way of this landmark piece of legislation is a handful of members in the State Assembly (both Republican and Democrat), who are willing to obstruct the public consensus, and jeopardize the public good, by placing their own political aspirations above social responsibility and environmental stewardship.

Imagine the shame of a member of the State Assembly who opposes SB 568, but wants to represent a portion of the Big Sur coast; the iconic coastline that inspired great literary works by Steinbeck, Stevenson and Jeffers, and photographs by Ansel Adams and Edward Weston.

Picture "the greatest meeting of land and water in the world" (Point Lobos) littered with polystyrene foam because the Assembly member who represents that stretch of California's coast did the bidding for the plastic industry instead of the people he represents.

If a politician says to you that we just can't do this right now, and starts to look the other way, make them look into the eyes of child, because that is who we are doing this for, and it's just too important to wait.

If our elected representatives have any doubt that this is the right thing to do, or the right time to do it; if they don't fully appreciate what's at stake, then they haven't given it enough thought, and they need to think again.

This is our world to change, but it's the children's world to inherit, and we must make it a better place for the next generation. There are now more than 60 cities and counties in California that haven't waited for Sacramento to act; they have taken the initiative and forged ahead with their own polystyrene foam bans because they understand what's at stake for future generations.

The leaders of these local grassroots movements aren't environmental extremists; they're soccer moms and blue-collar dads who care about their children and recognize the perils of our convenience driven society and the bleak future their children and our planet will face under a suffocating blanket of plastic pollution if we don't do something bold and decisive now.

In May 2011, a Los Angeles Times editorial, stated that SB 568 should be passed, noting that the impact on eateries and consumers is tiny, while the cleanup of plastic ocean trash is imperative.

In a May 1, 2012 editorial, the San Jose Mercury News said that Silicon Valley must do its part to reduce plastic in the oceans by addressing the issue of single use plastic bags and foam food ware; a week later, the San Jose City Council adopted a position supporting SB 568, but not before the city's environmental services department determined that there was no indication of adverse business or other negative economic effects related to the banning of polystyrene foam food ware as explained here.

Some major figures in the ocean conservation community are also weighing in on the issue and urging the Legislature to act. A few months ago, legendary ocean explorer and environmentalist, Jean-Michel Cousteau gave me an exclusive statement regarding his support for styrofoam bans, including SB 568; his words are eloquent and powerful and should be read by all. His entire statement can be found here.

... to successfully and unconditionally prevent the degradation of our environment, we as a people, as a society, must change our ways. Specifically, we must recognize the harm caused by discarding styrofoam, and stop it... if styrofoam is banned -- if styrofoam is not available to litter and end up in our landfills -- we are all better off... In other words, in our efforts to preserve and protect our planet, let's use all realistic and obvious capabilities. Banning styrofoam is one of those capabilities...

Governor Brown and the members of the Assembly would do well to heed Jean-Michel's words. It's time for the governor to show some leadership on this issue, and to impress upon the members of the Assembly that the cost to California, the cost to the taxpayers, the cost the environment, and most importantly, the cost to our children and future generations, that is being levied by the single-use disposable plastic industry, and the litter and pollution it leaves behind, is far too great to ignore any longer.

Californians simply can't afford to live in a styrofoam state of mind.

(*Styrofoam is a registered trademark of the DOW Chemical Company. "Styrofoam" is commonly, although mistakenly, used by the general public as a generic term for expanded polystyrene foam or EPS food ware products such as foam cups and clamshell take-out containers.)