Subarctic wildfire frequency is higher now than it has been at any other point in the last 10,000 years, new records show.

The records, obtained from charcoal in the Yukon Flats of Alaska, have revealed the history of wildfire activity in the region known as the subarctic, the area just south of the Arctic Circle, from North America to Scandinavia and Siberia, where boreal forests dominate and winters are long and dark.

But what the higher frequency of wildfires spells for the subarctic in a warmer future world is difficult to predict, researchers say.

"The climate is predicted to get warmer, and this favors more fires," said Ryan Kelly, a plant biologist at the University of Illinois who examined the records. On the other hand, the spike in wildfires is transforming Alaska's coniferous forests into woodlands made up of relatively fire-resistant deciduous trees. In the past, this shift resulted in a kind of vegetative feedback that put the breaks on additional burnings.

"Will there be a feedback now?" Kelly said. "Maybe. That fits with what happened before."

The new study, detailed in the July 22 issue of the journal Proceedings of the National Academy of Sciences, is part of decades-long research seeking to understand how ecosystems have changed in the past, Kelly told LiveScience, adding that this information will help scientists predict what may happen in the future. The current project focused on boreal forests, which make up about 10 percent of the Earth's land surface and more than 30 percent of its terrestrial carbon stock. [Earth in the Balance: 7 Crucial Tipping Points] 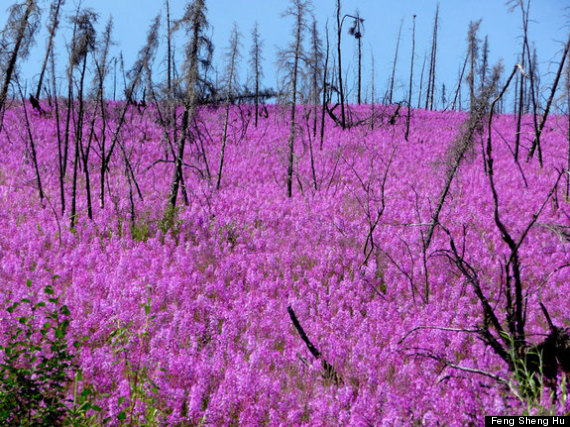 Fireweed, which is bright pink in color, is a plant that often grows after an area has been burned. Here, fireweed is shown blanketing parts of Alaska's Yukon Flats, a fire-prone boreal region.

Glimpse into the past

For the study, Kelly and his colleagues investigated the past fire regimes of the Yukon Flats, a region whose recent fire activity is one of the highest among North American boreal forests. The team collected ancient charcoal samples buried in the mud at the bottom of 14 lakes in the area.

By analyzing the charcoal, the researchers could tell when individual wildfire events occurred, and how severe they were. (The amount of charcoal present indicates how much of the forest burned.) By collecting samples of pollen in the sediment, they could also tell which tree species populated the Yukon Flats over time.

The scientists discovered that fire frequency and severity increased during the period between 6,000 and 3,000 years ago, coinciding with the spread of the highly flammable black spruce (Picea mariana). During the Medieval Climate Anomaly (MCA) between 1,000 and 500 years ago, the warm and dry climatic conditions — which are most similar to today's, compared with other periods in the 10,000-year record — caused intense fires to pop up.

However, the severe wildfires promoted the growth of fire-resistant plant species, resulting in a gradual shift from conifer-rich boreal forests to deciduous woodlands. Aspens (Populus tremuloides) and other deciduous trees limited the frequency of fires and prevented it from increasing more than in previous periods.

"Normally, you'd expect that if there is more burning overall in the region, that probably means there is a larger number of fires," Kelly said. "But that's not what we found."

In the last 50 years, the Yukon Flats have seen the same kind of changes in tree composition that occurred during the MCA, with young deciduous treesslowly taking over the territory once occupied by black-spruce trees. But the wildfire activity there has already surpassed the MCA limit: The current fire frequency in the flats is about 20 wildfire events per 1,000 years, compared with the previous rate of about 10 events per 1,000 years.

Humans appear to be the culprits behind this increase in severe wildfires.

"It's not that people are starting the fires, but there's a pretty clear link between humans inducing a warmer climate and increased forest burning," Kelly said, adding that lightning can more readily spark a wildfire when the environment is dried out from high temperatures.

The results are particularly striking, given that wildfires release the forests' stored carbon into the atmosphere, potentially exacerbating climate change. And it's plausible that as the climate continues to warm, even the fire-resistant deciduous trees could start to burn.

"We may be out of the realm of what has happened in the past," Kelly said. "Are we now entering into something totally different?"