Yesterday I had the rare pleasure of meeting and visiting with a true original -- a man who, together with a core group of compatriots, has done more for the environmental movement in Latin America than perhaps anyone else, and has done it in his own inimitable way.

Alberto Ruz Buenfil, otherwise known as Subcoyote Alberto, would be the first to say he didn't do it alone; there were hundreds, perhaps thousands of collaborators along the way, and I hope to meet many of them in my coming travels. But there is no doubt that, in a lifetime dedicated to social change and in the 13 years he dedicated to the Rainbow Caravan for Peace, he inspired a generation of writers, artists, gardeners and activists dedicated to a more sustainable future -- including yours truly. 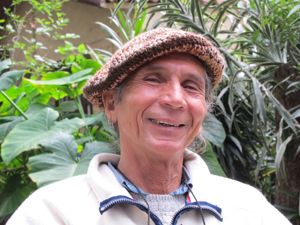 Alberto grew up surrounded by the Mayan mysteries of Palenque, where his father, the internationally known archaeologist Alberto Ruz Lhuillier, discovered the most important ceremonial structure in the ancient city, the subterreanean tomb of Pakal the Great. The younger Alberto went on to study everything from chemical engineering to economics, political science and finally theater, first at the Autonomous University of Mexico and then in Cuba.

The Vietnam War shifted his life into a different focus when he joined the anti-war movement and traveled to the United States, spending time with Chicano leaders and the Black Panthers, Ernest Callenbach's Ecotopians and all manner of social change currents erupting at the time. He settled into the life of a nomad, traveling in Africa, India and the Far East, studying intentional communities from Germany's Bauhaus to Israel's kibbutzim to the ashrams of India. It was in India that he launched his first nomadic theater tribe, the Hathi Babas, and later The Illuminated Elephants, which traveled throughout the U.S., Mexico and Guatemala performing, entertaining and spreading seeds of a different way of life, one based on peace, sustainability and mutual respect.

In 1982 he finally decided to take a break from the nomadic life and plant his roots, returning to Mexico with members of his tribe to form Huehuecoyotl. The community was built on sustainable design principles, making it the country's first ecovillage. It was here that he took the name Coyote, based on the name of his new community -- Huehuecoyotl means "old, old coyote" -- and he began a series of communiques with the name "Viejo Coyote."

The call of the road never left him, however, and in 1996 he formed the Rainbow Peace Caravan, taking the lessons of the ecovillage with him. One of the group's first stops was in Chiapas, where they participated in a council with the Zapatistas.

"I had always identified with the Mayans," Alberto explained. From his conversations with Zapatista leader Subcommandante Marcos, his new moniker evolved: Subcoyote Alberto Ruz. "I was leaving the community and it was time for someone else to take charge," he pointed out. "So I became Sub-Coyote."

The title is a fitting one for a person whose lifelong commitment is expressed with a touch of whimsy: the seriousness of the lessons taught by the nomadic tribe was always leavened and livened with theater and the arts, storytelling and dance, and a sense of good fun.

Hundreds of people from all walks of life joined the caravan at different points along the way, particularly at the international gathering in Cuzco, Peru, The Call of the Condor in 2003. That was when I became aware of this traveling phenomenon, because my sister Tami joined them for awhile. Her story of the experience left an indelible impression that was to tug at me for seven years until I finally succumbed. Now, in a strange way, I'm following the Coyote's trail, and my sister will join me along the way.

The caravan continued all the way to Tierra del Fuego, and at this point the Subcoyote had planned to end it -- "unless there was a miracle," as he recalls it.

Indeed, there was a miracle. Brazil's then-Minister of Culture, the famed musician Gilberto Gil, invited the caravan to come and travel through the country giving workshops on sustainable living. The caravan rolled northward and through the deepest Amazon, spending four years in some of the poorest regions of the country.

Finally, in August of 2009, Alberto has returned home to Huehuecoyotl. But not to rest on his laurels. At the age of 65, when most people might assume they've earned a peaceful retirement, he's begun a new project, at the behest of Mexican bestselling author Laura Esquivel (Like Water for Chocolate): he's joined the staff at the Casa de Cultura Jesus Reyes Heroles in Coyoacan, Mexico City's beautiful historic neighborhood, to look for ways to share the lessons of the Rainbow Peace Caravan with the at-risk youth of the district.

I caught up with the Subcoyote just as he was beginning to settle into his new job, and we shared coffee and stories. There's much more to share than I have room to tell in a blog entry, but watch this spot for selected cuts from the two hours of video I shot with him.

Next month, we'll pick up the conversation where we left off when I visit him at his weekend home in Huehuecoyotl and meet his extended family.