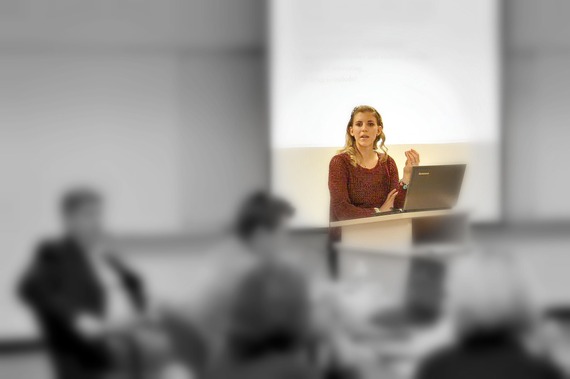 After getting my master's degree in teaching, I was fortunate to land a job in a school management company, and oddly enough, I was the only woman working in the office. The male-dominated environment did not intimidate me, and I very much enjoyed the opportunity to learn and embrace the new culture I was immersed in.

My co-workers kept their distance at first, as though I was this strange specimen they didn't know how to interact with. My desk was out in the open in the middle of the office, so I truly felt like a freak show exhibit that people awkwardly, yet curiously, tip toed around. With my persistent friendliness, willingness to help everyone, and hopeful smile, I slowly ate away at their unsure exterior and quickly grew some of the most cherished professional relationships I have encountered.

The token blonde American
I was hired with the title Administrative Assistant, which I felt gave people the impression that my job was to answer phones, distribute mail, and welcome guests, when my primary responsibilities included: writing and editing all educational and communication documents, creating and editing newsletters for 30 schools, developing news and marketing pieces, writing press releases, speeches and proofreading all documents for internal and external use, managing social media sites, editing test booklets, and developing education initiatives and events for our network. Because of my professional and academic background in English, communications, and teaching, I also presented at educational workshops and public relations meetings in my areas of expertise.

Isolated
I loved having the ability to show my work ethic by anticipating our communication needs and proactively starting projects I wasn't even asked to do. Sure, I ate alone at my desk every day, working through lunches, or ate in the basement lunch room with a book to keep me company. Sure, while everyone else took long social breaks, usually involving snacks and tea, I observed from afar, but I was happy. Or was I? No! That was not enough for me.

Office acceptance
My active presence made my co-workers acknowledge me, and soon I became one of them. I began actually taking lunch breaks with groups of people instead of eating alone. In an effort to become healthier, I organized a contest, which turned out to be extremely motivating. Nobody thought the underdog girl had a chance to win in a group of big men, but I lost 30 pounds and won the contest.
This is when things started to get a little tricky for me.

Confronted by the boss
My boss, a very intimidating man, called me into his office for a meeting to discuss my clothes. He told me that since I lost weight, my clothes seemed to fit me differently and that it was causing people to notice. I wasn't quite sure what he was getting at, so I asked for clarification. He said that things fit me in a way that showed off my body that wasn't appropriate for work. Still confused, I asked him to be more specific. Were my dresses too short? No. Did I wear revealing shirts? No. Were my shoes too high? No.

Of course I knew the answers to all of these because by nature, I dress conservatively. My boss implied that because of my weight loss, perhaps physically I looked better, which he saw as a threat and a problem in such a strict, conservative, non-American culture.

Year one review
After I had been there a year and proved my abilities, I talked to my bosses about projects I wanted to start, reviewed the work I had done, which went miles above my job description, and inquired about a raise and title change. Although they allowed me to entertain them with the weeks I spent preparing for this meeting with facts, figures, data, and testimonies, that was really all it was- an opportunity for them to be entertained. Nothing changed except my ambition to work even harder. I knew I was an invaluable asset to the company; they knew I was an invaluable asset to the company; so why wasn't I taken seriously?

Year two review
When year two rolled around, I had another year of professional accomplishments under my belt, spent weeks preparing for a meeting I initiated, and calmed my shaking (sweaty) nerves before I entered the meeting a deceptively confident woman. I passed my agendas to my bosses and began. After listening to me, one of them smugly asked what it was exactly I wanted. Oh! We're getting somewhere, I thought.

I provided them handouts of job descriptions of Communication Specialists in our area, highlighting all of the responsibilities we shared. I had done my research thoroughly and knew they couldn't refuse me this time. They loved the work I did; they could count on me to review a 90-page proposal at 9 p.m. on a Friday night. When I was extremely sick, people would call me to solve problems from home. The day before my wedding, I took a phone call and snuck in some work; I was loyal to this company and proud of my work- anyone could see that.

My requests
I told them a title change seemed appropriate to accurately reflect my level of work; I told them I would like an office. Because of the location of my desk, I was constantly interrupted, had no privacy, and was subject to constant conversations around me, which is challenging when focusing on writing and editing. I told them I thought it was time for a raise. My bosses seemed, again, entertained, as though this meeting I spent so much time preparing for was the sweet, silly antics of a child that they had to listen to in order for me to shut up and go away.

The response
They told me how valuable I was to the company and that I know how much they appreciate the work I do. They told me I was no different than anyone else, and they expressed their disbelief (and was that disgust I detected in that chuckling snort?) that this was the second meeting I initiated in two years requesting such things. Nobody else was requesting such meetings and pointing out their accomplishments, they said, implying I should be more modest and happy with my position.

I clasped my shaking hands and took a deep belly breath to still my quivering voice- quivering from anger and fighting back tears. With my (always) erect posture, I at least appeared confident. I asserted that I am not like everyone else, that I am the only girl, the youngest by far, and one of the only Americans in the office, making me a triple minority. I expressed how I have all of these going against me and how I have had to work extra hard to fit in and prove myself.

They told me there was no money in the budget for a raise.

They told me there was no space to give me an office.

They told me that Administrative Assistant still accurately depicted what I am and couldn't understand what a title change would prove.

Defeated and confusion
I left, completely defeated. A few weeks later I was offered my dream job; somehow I still felt loyal to this company that had it out for me, but thankfully I took the teaching job and left on happy terms.

What happened when I left? Eight people were hired. My simple position was split into three separate jobs. Where did the office space miraculously come from? How did the budget find salary space for 8 new employees who hadn't even demonstrated worth or loyalty to the company?

Federal laws are in place to protect women from discrimination in the workplace, but what happens when the discrimination isn't so blatant? How can people say that women are not discriminated against when there are thousands of stories of men having this "boys club" mentality, excluding women, and treating them unfairly? Discrimination comes in all forms. No matter the extent or mode of it, the results are debilitating, humiliating, and unfair.

Am I being too sensitive and complaining, or did I have a legitimate reason to feel ostracized? You decide.