New York (AP) -- A New York City photographer gives himself 30 seconds to take 10 shots of nude models on the subway.

He also takes nude photos in Times Square and Chinatown.

During a recent shoot on a subway car, one woman screamed while an elderly man started shaking. Most passengers, though, were blase.

An exhibit of 14 of his images opens Thursday at Chair and Maiden Gallery in Manhattan. Hyman says he's inspired by nude paintings at the Met. He insists his photos aren't pornographic.

People's private parts, he says, are "one of the unifying aspects of being human." 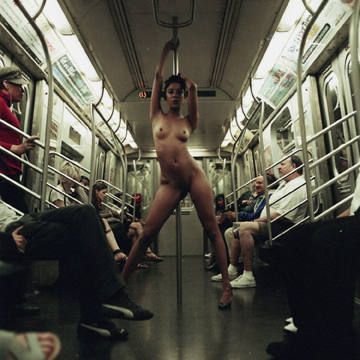