While the subway's arrival may be ambiguous, one thing about your commute is certain: No one wants to talk to each other. In our contemporary culture, the prospect of communicating with -- or even looking at -- a stranger is virtually unbearable. Everyone around us seems to agree by the way they fiddle with their phones, even without a signal underground.

It's a sad reality -- our desire to avoid interacting with other human beings -- because there's much to be gained from talking to the stranger standing by you. But you wouldn't know it, plugged into your phone. This universal armor sends the message: "Please don't approach me."

What is it that makes us feel we need to hide behind our screens?

One answer is fear, according to Jon Wortmann, executive mental coach and author of "Hijacked by Your Brain: How to Free Yourself When Stress Takes Over." We fear rejection, or that our innocent social advances will be misinterpreted as "creepy," he told The Huffington Post. We fear we'll be judged. We fear we'll be disruptive.

Strangers are inherently unfamiliar to us, so we are more likely to feel anxious when communicating with them compared with our friends and acquaintances. To avoid this anxiety, we turn to our phones. "Phones become our security blanket," Wortmann says. "They are our happy glasses that protect us from what we perceive is going to be more dangerous."

But once we rip off the bandaid, tuck our smartphones in our pockets and look up, it doesn't hurt so bad. In one 2011 experiment, behavioral scientists Nicholas Epley and Juliana Schroeder asked commuters to do the unthinkable: Start a conversation. The duo had Chicago train commuters talk to their fellow passengers. "When Dr. Epley and Ms. Schroeder asked other people in the same train station to predict how they would feel after talking to a stranger, the commuters thought their ride would be more pleasant if they sat on their own," the New York Times summarizes. Though the participants didn't expect a positive experience, after they went through with the experiment, "not a single person reported having been snubbed."

In fact, these commutes were reportedly more enjoyable compared with those sans communication, which makes absolute sense, since human beings thrive off of social connections. It's that simple: Talking to strangers can make you feel connected. The train ride is a fortuity for social connection -- "the stuff of life," Wortmann says. Even seemingly trivial interactions can boost mood and increase the sense of belonging. A study similar in hypothesis to Eply and Schroder's published in Social Psychological & Personality Science asked participants to smile, make eye contact and chat with their cashier. Those who engaged with the cashier experienced better moods -- and even reported a better shopping experience than those who avoided superfluous conversation.

Even more, that quick chat with a stranger could pull you out of whatever stress hole you're currently sucked into. As the Times writes, "The great thing about strangers is that we tend to put on our happy face when we meet them, reserving our crankier side for the people we know and love." So, even if you're forcing yourself to be a bit chipper, the act of trying to be happy is a step closer to experiencing it. Two studies published in The Journal of Positive Psychology found that those who actively attempted to be happier experienced higher levels of joyful moods. Plus, your good mood will be contagious. 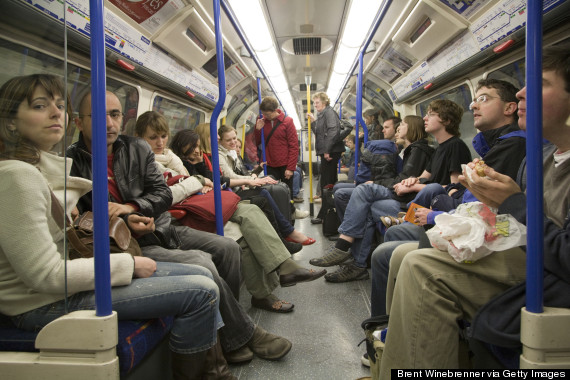 Still, it's not just fear of rejection that deters us from getting chatty. We approach people with a "dual sense," Wortmann says. We immediately try to judge how a person can be useful to us by analyzing whether talking to that person is a "good" use of our time. We often miscalculate. "As opposed to looking at each individual as a whole, as someone you can learn from, we see them as either 'valuable' or not."

A person is valuable if, tangibly, he or she can give us something, help us advance our careers or offer guidance in an uncomfortable situation. And if a person is not judged as valuable, we dismiss: In go the headphones to block out the faces, hearts and minds we deem impractical on the train.

But there's no way of fully knowing what a person has to offer until we make the decision to connect. Again, our judgement of what we consider a "good" use of our time and what is a "waste" is entirely disillusioned. There is much to be gained in shared moments on the subway when we choose to disconnect from our devices to connect with flesh and brain.

Take a couple like Jenny and Jon, for example, who managed to look away from their devices and distractions and hold eye contact for a moment. The pair shared a spark on the C train in 2011, and they are now married. Surely the couple would agree that the exchange was a good use of time.

As psychologist Stanley Milgram put it, cities are breeding grounds for "familiar strangers": people we recognize and see often but never actively engage. "Nothing is more characteristic of urban life than the fact that we often gain extreme familiarity with the faces of a number of persons, yet never interact with them," he wrote. We may recognize the same slew of people riding our morning train, but we are inclined to look past them -- out of either that fear or dismissal (deeming them useless).

One impediment is busyness: We're all overworked and hyper-connected. In 2013, 500 million vacation days were left unused in the U.S., and Americans spent an average of 23 hours a week connecting through digital social mediums. Likely, you think of your commuting time as a moment to be undisturbed by phone calls and office mates and the frenetic nature of it all to play "catch up" on your phone. This is a mistake.

The ride should be taken advantage of -- it's downtime forced upon us. Rather than scroll mindlessly through a phone unable to connect to the web, choose to unplug and connect in a different way -- your brain benefits from that time off-screen. "The human body is hard-wired to pulse," writes Tony Schwartz, author of "Be Excellent at Anything: The Four Keys to Transforming the Way We Work and Live." "To operate at our best, we need to renew our energy at 90-minute intervals -- not just physically, but also mentally and emotionally." That stranger on the subway is a great outlet for recharging; plus, he or she may incite some kind of spark within you. The idea follows the well accepted concept that the best ideas come in the shower -- or when you're not really looking for them.

We may be at an age where endless information is at our fingertips, but experience is not. As Wortmann says, Google may have all of the facts you need, but it can't tell you what questions to ask. In the ways we can learn from each others' experiences, every person is a "good" use of time.

What can you do with this information? Next time you're on the subway platform, a park bench, crossing the street in tandem with a stranger, consider engaging. Offer a compliment, share an observation about the birds pecking at a tossed hotdog bun, or at the very least, render a smile. It'll keep getting easier.