The statisticians at YouGov BrandIndex seem to think so. They used data from their daily tracking index of consumer perception of fast food chains to make a graph of the brands that the public thinks are the highest quality and those that offer the best value to determine which quick-service chains offer the best bang for the buck.

As you can see in the chart below, three chains came out on top: Subway, Wendy's and Chipotle. These three have performed relatively well in recent years, largely because consumers see them as offering fresher food than competitors like McDonald's and Taco Bell, at roughly equivalent prices. 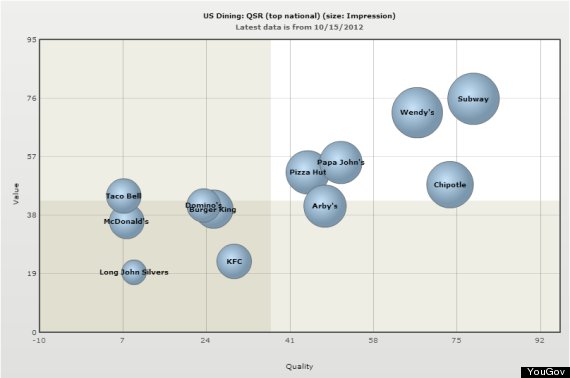 Nation's Restaurant News argues that this means those three top-performing chains are in the best position to poach customers from their more expensive rivals at "casual dining" chains. These chains certainly seem to be banking on that being the case. Both Wendy's and Chipotle have recently implemented plans to renovate their restaurants' interiors to look more upscale and modern in an attempt to get more customers to dine in rather than take out.