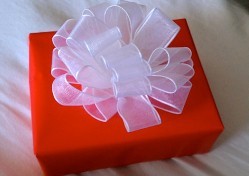 Imagine you're a kid and it's the best Christmas ever. You got all the toys and games you wanted. You finish unwrapping them in such a whirlwind of glee you collapse on the pile with too much joy to process.

Now imagine someone told you that was it. That's it for the fun. You've unwrapped the presents but you can't play with them. Ever.

Do you see where I'm going with this?

Now imagine years go by -- 20, 30, maybe more -- and you're looking back on your life, feeling wistful for what might have been. It hurts. Because you realize the only person who kept you from using those gifts was you.

Many years ago I came to an important intersection in my life, and I wanted to be careful before I crossed the street. So I flew out to the mountains of central Oregon for a career planning workshop led by Dick Bolles, author of What Color Is Your Parachute? Our job for those two weeks -- which may as well have been in heaven for the scenery -- was to figure out how we'd most love to spend the rest of our lives.

Dick considered it his mission to help people use their gifts. I'd never really thought of myself as a person with gifts. I mean, who does? But here we were, on a Christmas morning that lasted two whole weeks, unwrapping those gifts and comparing notes: "What do you think about this one? I'm going to love using this..."

"Gifts have a kind of energy," Dick told us, "and if you don't let that out you'll go crazy." Is that why, when I was writing my first book, I felt so at peace? I was so immersed in work I loved that if someone would've asked me what I thought about dying, for example, I can imagine having brushed off the question. "Well, whatever," I can imagine having said. "I just want to get back to my book."

It's Only Too Late If You Don't Start Now author Barbara Sher says "the passage of time drives you crazy when you know perfectly well you're not using it right."

Between Dick and Barbara, whom I think of as godparents to the radio talk show I dreamed up at the Parachute workshop, I started noticing when I felt anxious about the passage of time. If we were having fun I didn't worry about it.

What did that tell me?

Hard work and great fun aren't mutually exclusive, by the way. And enjoying what you do isn't selfish. It's responsible. Do you really want to get help from a doctor who hates her job? To send your 10-year-old to school if his teacher hates being one? What about the pilot of your next flight? How reassuring would it be to climb aboard thinking someone who hates his life is at the controls?

Your gifts weren't meant for the kid next door. They're yours. The same with your dreams. Do you think you had them because they belonged to someone else?

Who you are and what you love doing is not a mistake.