When Bessie Nkhwazi, the mothers2mothers (m2m) Malawi District Manager for Thyolo District, told me that Thekerani Health Center was "very far away," I did not think much of it. I have visited plenty of health facilities labeled "very far" during my time as a Global Health Corps Fellow in Malawi, but after almost two hours in the car on a precarious, mountain-top dirt road, I fully understood why Bessie emphasized "very far."

When we finally arrived, we were greeted by Charity Chiteuwe, the m2m Site Coordinator at Thekerani Health Center. Charity runs the m2m program at Thekerani, which opened in November of 2013. Charity and her fellow Mentor Mothers provide education and peer support to HIV+ women, working to ensure that they access treatment early and stay in care to protect their babies from HIV transmission and remain healthy. Mentor Mothers are recruited, trained and employed in understaffed health facilities throughout Malawi to achieve m2m's vision of eliminating pediatric AIDS, empowering women, and creating health and hope for mothers and babies, their families, and the greater community. 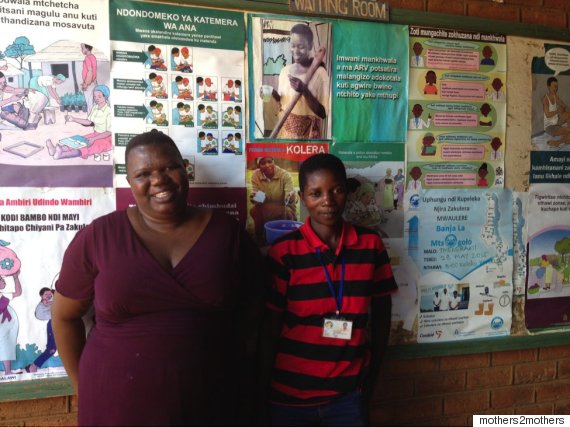 According to the Ministry of Health, Thekerani Health Center sees an average of 8,840 people per month, out of which about 57 percent are women of reproductive age. Therefore, due to the intensely rural location of the facility and the number of women seeking reproductive health services, health education for the prevention of mother-to-child transmission (PMTCT) of HIV is crucial. Along with consistent support throughout antenatal and postnatal periods, Charity maintains contact with her clients after their babies are born and encourages them to bring their children back to the facility for HIV testing at six weeks, and 12 and 24 months. Determining a child's HIV status is critical so that they can be put on life-saving treatment if they test positive. Without treatment, about one third of children infected with HIV die by their first birthday, and half die by the age of two. Sadly, in 2012, only 35 percent of children exposed to HIV received a test by the recommended two months of age.

When I asked Charity about testing for HIV-exposed children at Thekerani, she smiled shyly and with pride told me, "For 11 months (from November 2013 to September 2014) we had no children test positive." Charity continued, "To go for that long with no children testing positive, I know that our PMTCT program is going well.. We work together with partners and facility staff to solve problems, and it makes me happy that it is working!" Charity discussed her role in the community and how many women acknowledge the important work that she and the other Mentor Mothers are doing -- and some women even follow her home to receive additional information and support.

Although I did not want to pry, I was curious what happened in October of 2014 when the 11-month streak of HIV tests for children came to an end. Charity explained to me that Thekerani is a referral site, meaning women who seek antenatal services elsewhere come to Thekerani to deliver their babies -- even coming from as far as neighboring Mozambique. This was the case in October, where a woman who had not gone through m2m's PMTCT program came to Thekerani to give birth, resulting in the baby being born with HIV. Charity noted, "It made me very sad. This woman was not an m2m client and did not have the information she needed."

Although a setback for Charity and the surrounding community, this is a stark reality in Malawi where mother-to-child transmission is the second major cause of HIV transmission, behind sexual contact, accounting for approximately 25 percent of new infections each year. Charity, along with facility staff at Thekerani, remain optimistic about the future and the impact they can make in reducing the HIV prevalence rate. A nurse at Thekerani reflected on the trusted relationships that Mentor Mothers develop with their clients, noting that they contribute to the attainment of positive health behaviors among mothers by sharing their own experiences. She adds that women in the community are encouraged and motivated by the positive behaviors of Mentor Mothers, which encourages them to visit the health facility for care. While Charity recognizes the challenges of her work, she continues to have a positive outlook on the difference she is making. She says, "I like my job very much. Each day I help people and I know that I am helping to save lives." Charity and the other Mentor Mothers are playing an integral role in making sure no child is born with HIV in Malawi. One facility and one village at a time, they educate and empower mothers living with HIV. These determined women understand their individual successes are part of a larger achievement, one which belongs to their community and country.